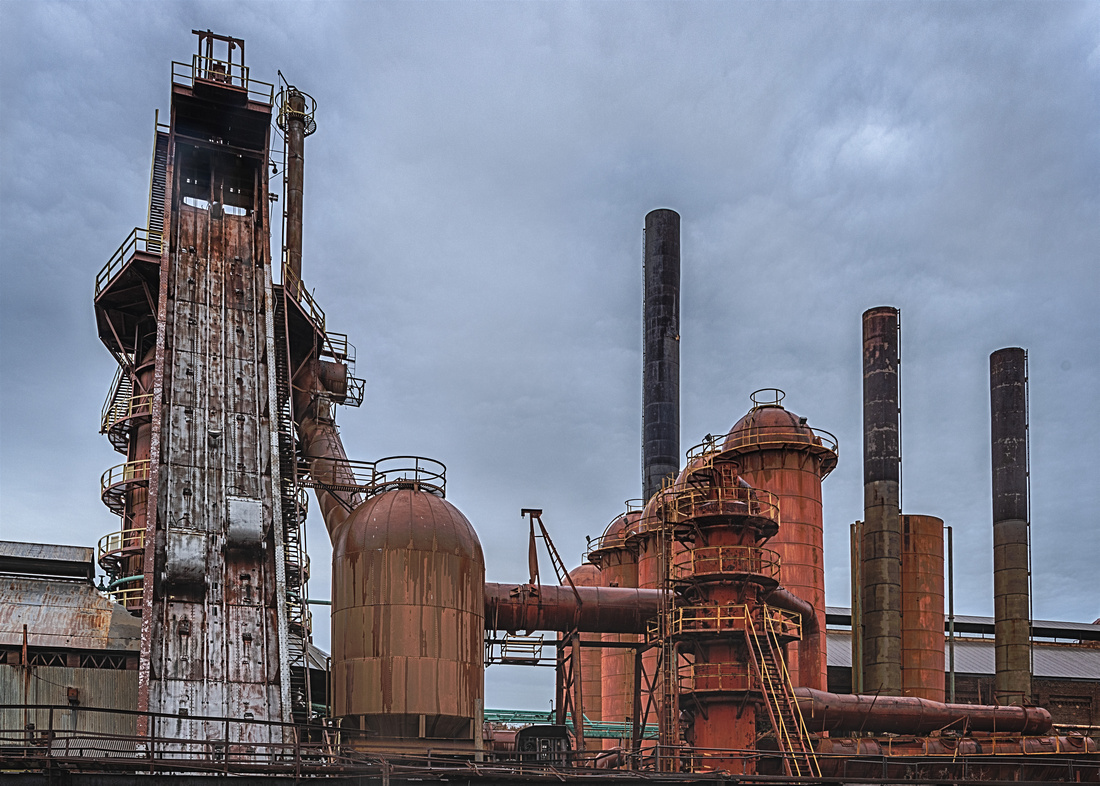 In the late 19th century, in the post-Civil War era, Sloss Furnaces in Birmingham, AL was the world’s largest producer of pig iron, an intermediate product of the iron and steel industry. Sloss is the reason Birmingham is called the Iron City or Steel City.

The Furnaces sit on 50 acres of Birmingham land by an L&N Railroad line that used to deliver raw materials and take the pig iron and slag (impurities) away. All raw materials needed to produce pig iron were available in abundance within a 30-mile radius making Birmingham the perfect location for a blast furnace.

Sloss Furnaces are now a National Historic Landmark and, in 1981, became the only blast furnaces in the U.S. to be restored and used as a tourist attraction, museum, concert, wedding, and festival venue, metal arts instruction, and for haunted ghost and paranormal experiences.

The Sloss blast furnaces are very tall structures. There are two furnaces on the site. The biggest one is 60’ tall and 18’ in diameter and, other than smokestacks, is the tallest structure at Sloss Furnaces. It is a steel stack lined with refractory (fireproof) brick, where raw materials, iron ore, pellets, sinter (a solid mixture of iron ore and other materials), coke (cooked coal), and limestone were stored separately in a stockhouse before being dumped into the top of the furnace in a predetermined recipe, as preheated air was blasted into the bottom. Pig iron was produced by melting iron ore in a blast furnace at very high temperatures--3600°F to 4200°F.

Raw materials were delivered by rail to the stockhouse where they were held in storage bins. A stock tunnel, two levels below the storage bins, was 250 yards long, and served both blast furnaces. Today, it is a dark, spooky place where you hear sounds of running water and the walls are covered with dripping water and bright color of questionable origin. It is, undoubtedly, the reason Sloss is considered haunted by ghosts and why ghost nights and paranormal events are a popular attraction.

Shutes (seen in the ceiling of the stock tunnel) would open to deliver raw materials from the storage bin, two levels above, to a scale car in the stock tunnel that would weigh the material, load it into skip cars, and carry it up rails on an inclined, escalator-like ramp called the skip bridge, where it was charged (delivered) into the top of the furnace.

In the long casting house, liquid iron and liquid slag were cast (drained off) through an iron notch and slag notch.

In early years, a floor-casting method was used. The floor of the casting shed was compacted sand. Molds were dug into the sand for iron bars. There was one main trough, or runner, going down the center of the casting shed, secondary troughs extended from the main trough, and bars extended from the secondary trough. Workers thought the bars looked like piglets and called them pig iron.

After the floor-casting method, hot metal and slag were poured into ladle train cars, large steel kettles lined with refractory (fireproof) brick. Some train cars were called torpedo cars (also called sub cars due to their shape). Slag was processed into road fill or railroad ballast.

Hot, dirty gas was vented from the furnace, cleaned, burned for energy in four cylindrical shaped hot blast stoves, and used to preheat the air entering the blast furnace.

A network of machines and structures were employed: stoves to heat the air, blowers to pump blast air, boilers to produce the steam that drove equipment, and pipes that carried steam, water, and gas.

Sloss used five million gallons of water a day for each blast furnace to cool the furnaces, create steam, power machinery, and cool molted iron and slag. Following each cycle, hot water was pumped to spray ponds where it was cooled and recycled.

The Pyrometer House, named after temperature measuring instruments located in the house, was the strongest building on the site and would protect workers if anything went seriously wrong with a furnace. Workers called the Pyrometer House the Doghouse--if the furnace acted badly, it would put them in the Doghouse.

Leased convict labor, predominately black, made up 60% of the workforce until 1928. Workers were segregated, including the use of a black bath house, separate time clocks, separate company picnics, and segregation of jobs.

Work at Sloss ran 24 hours a day at it’s peak. Locals used to park on nearby roads after dark to watch as hot molten iron and slag lit up the night sky. Those days are over but the ghosts of Sloss remain and it is worth a visit.