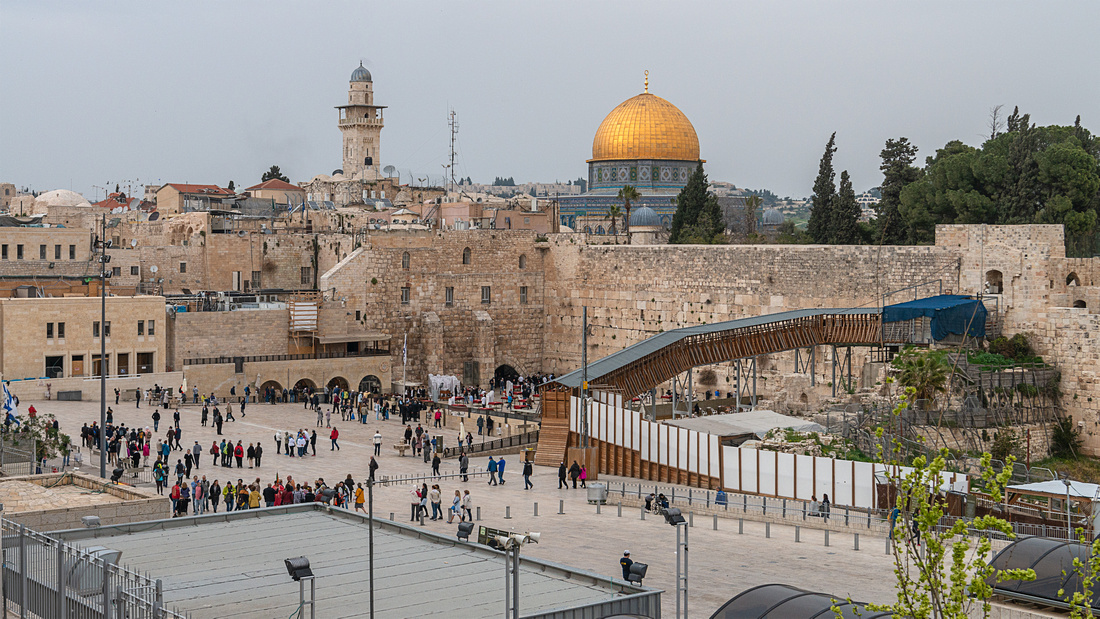 The Western Wall & The Temple Mount

The Western Wall (Wailing Wall) is an ancient limestone wall in the Old City of Jerusalem.  The wall was originally erected as part of the expansion of the Second Jewish Temple begun by Herod the Great, which resulted in the encasement of the natural, steep hill known to Jews and Christians as the Temple Mount and the gold-domed Dome of the Rock.  For Muslims, it is the site where the Islamic Prophet Muhammad tied his steed, al-Buraq, on his Night Journey to Jerusalem before ascending to paradise from the Temple Mount and constitutes the Western border of al-Haram al-Sharif (the Muslim name for the Temple Mount).

Because of Temple Mount entry restrictions, the Western Wall is the holiest place where Jews are permitted to pray.  The Temple Mount, the Holy of Holies, the Holiest site in the Jewish faith, lies behind it.

Of four retaining walls, the Western Wall is closest to the Temple Mount which makes it the most sacred site recognized by Judaism outside the Temple Mount.  It is commonly believed to have been built around 19 BC by Herod the Great.

The term Western Wall and its variations are used for the section traditionally used by Jews for prayer; it has also been called the Wailing Wall, referring to the practice of Jews weeping at the site over the destruction of the Temples; according to Jewish law, you are obliged to grieve and rend your garments upon visiting the Western Wall and seeing the desolate site of the Temple.  The term, Wailing Wall, is not used by Jews and increasingly not used by many others who consider it derogatory.

When you approach the Western Wall, you are given a mandatory kippah (yamaka or skullcap) to cover your head.  Male visitors are allowed on the left side as you face the wall.  An area is fenced off to the right side for females.  The area for males is about twice as big as the area for females as can be seen in one of the photos in my Western Wall gallery.

The Western Wall is constructed with large stones on the bottom and smaller and smaller stones as the Wall rises; the largest stones are under ground level.  It is traditional that notes asking for prayers are stuck in the cracks between stones.  Greenery grows out of some cracks in the wall and birds made a home where one stone was recessed into the wall.

In this technologically connected world, I saw more than one person taking selfies at the Western Wall.  Even though I was holding my DSLR, that seemed out of place.

As a life-long Southern boy, I only encounter traditional Jewish attire when visiting NYC or Israel but I’ve always been curious about the clothing’s origin, religious significance, and meaning.

Clothing plays a significant role in Judaism: reflecting religious identification, social status, emotional state, and even the Jews’ relation with the outside world.  Rabbis teach that maintaining distinctive dress in Egypt was one of the reasons Jews were worthy of being rescued from servitude.

Some Orthodox Jewish visitors to the Western Wall wear large, round, fur hats called shtreimels, most often worn on Shabbat, the Jewish Sabbath.  There are variations of shtreimels and those in the know can discern which Hasidic (Ultra-Orthodox) group a person belongs to based on the type of headwear worn and other nuances in dress.

Orthodox Jewish men also wear black fedoras (hats) and long black coats that were stylish in Europe 100 years ago.  Orthodox men often wear black suits, and many Hasidic men wear suits that are reminiscent of the style Polish gentry wore in the 18th century when Hasidic Judaism began.  As with many religious explanations, many claim the Polish gentry connection isn’t true.

Old Polish laws banned Jews from wearing clothes made of expensive materials and decorated with jewels, chains, or appliqués of gold, silver, or precious stones.

The traditional dress of Jewish men in Poland was unusual because it was black, a color rare in Polish attire. Women’s clothing was most often brown but sometimes black.

Jews were forbidden to wear more than two gold rings on weekdays, three on the Sabbath, and five on holidays.

There is a Halakhic requirement (a collection of Jewish religious laws) that males wear prayer shawls.

Orthodox men and boys wear payots (sidelocks or side-curls) based on an interpretation of the Biblical injunction against shaving the corners of the head.

Biblical and state laws once determined how Jews dressed.  Trends and state laws have changed but many Orthodox men still dress as they did in 18th century Poland.

And, finally, there are Western Wall cats.