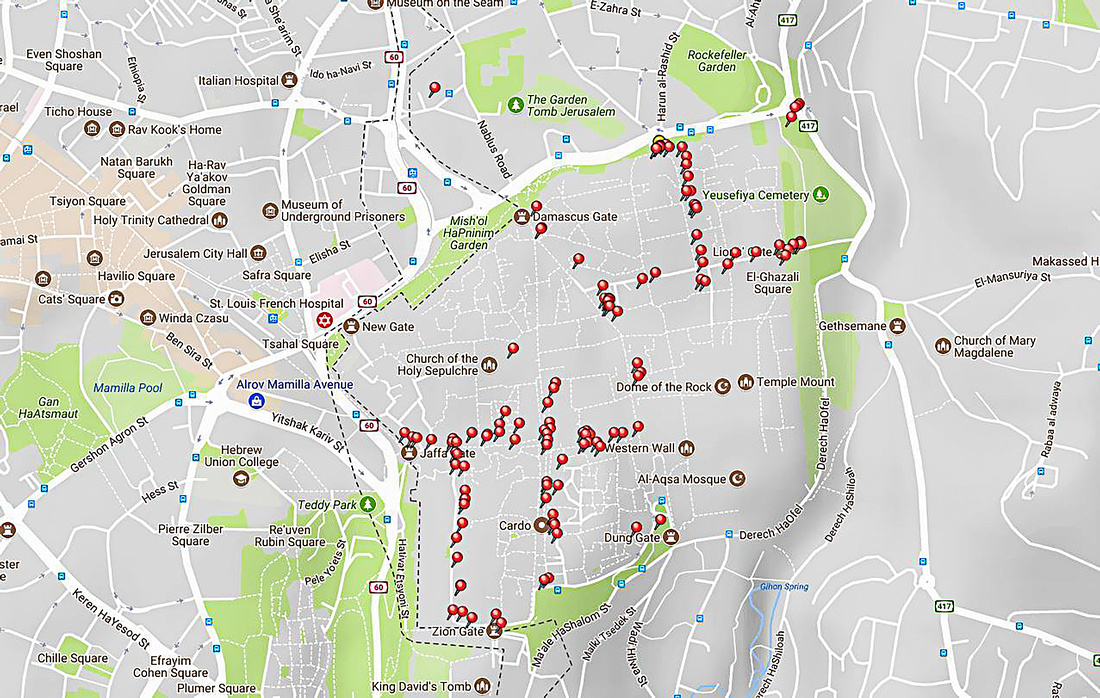 The images in this blog and photo gallery are from the last day in Jerusalem on this trip and didn’t fit categories like the Tower of David, the Western Wall, etc.  They show the daily Jerusalem life of tourists and citizens.

My Nikon D800 had a GPS and the first image in my photo gallery shows the location of all images in this gallery but doesn't show images previously in blogs and galleries about the Western Wall, the Tower of David, etc.

The original gates are angled so attackers can't enter directly into the city without making a sharp 90-degree angle turn.  This was to prevent enemies on horseback from charging full-speed, straight through the gates, and to make it difficult to use a long battering ram to break them down.  Above some of the gates, there is a hole through which boiling liquids could be poured on attackers.

The main gate into Old Jerusalem is the Jaffa Gate and it has a road that permits cars and motorcycles to enter.

It’s easy to forget that Old Jerusalem is thousands of years old and most structures were built before electricity, plumbing, telephones, and the internet existed.  Those amenities were added in modern times but required that conduits, pipes, and wires run on the outside walls in what looks like, and is, a wiring and plumbing nightmare.

Something I didn’t experience in my 2008 trip was that many areas of Old Jerusalem had a strong smell of sewage.  It’s hard to wire 3,000-year-old buildings for electricity and phones but much harder to install plumbing and a sewage system.

All city services must be overwhelmed.  I saw empty boxes stacked behind shops or discarded on the street.  Trash pickup seemed nonexistent.

There were a lot of people in Jerusalem when I first visited; ten years later, there were more.  Most areas of Jerusalem had so much foot traffic that it was difficult to walk without running into someone.  I’m sure this influx of people has strained all city utilities and services.

One thing that’s hard to miss in Israel is the influence of the Roman Empire that invaded and conquered Palestine and Jerusalem.  Rome laid siege to Old Jerusalem and destroyed much of it but their influence over rebuilding is still evident.

The Roman Cardo was the main street in Ancient Roman cities, running from north to south and lined with a row of columns on each side. The Cardo of Jerusalem begins at the Damascus Gate in the north and crosses the city southwards until it reaches the area of the Zion Gate.  The Cardo was comprised of a central lane, open to the sky, for the passage of carriages and animals, flanked on each side by colonnades, covered walkways for pedestrians.  The street of the Cardo was paved with Jerusalem stone.

Parts of the Cardo are still preserved in Jerusalem.    Excavations in the Jewish Quarter, between Chabad St. and HaYehudim St., have uncovered sections of the Cardo extending intermittently for approximately 320 feet.

Romans didn’t invent arches but they improved their ability to be used in constructing large viaducts and bridges, and smaller doorways and domes.  Ancient Romans created an arch that could support huge amounts of weight by using concrete, a mixture of lime and volcanic sand.  Arches made of this substance allowed them to build massive structures such as aqueducts, which provided water to cities, bridges, ceilings or roofs called vaults, a hemispherical ceiling or roof called a dome, and smaller structures, such as doorways.

Romans solved the problem of arches not being able to support massive weight and expanded the use of arches for all the world's architects.  Arches were ever present in Jerusalem.  They were used in vaults, domes, and doors.  If you saw a rectangular door, it was a modern architectural invention modified to fit ancient arches.

Years ago, feral cats were introduce to Jerusalem to control the rodent population.  They have flourished and the authorities don't believe in spaying and neutering and say, as proof, that the Bible says, go forth and multiply.  The cats have.

The Lutheran Church of the Redeemer was behind barbed wire with broken glass at the bottom of the barbed wire to make unwanted entry difficult.

Israeli soldiers are young, male and female, carry assault rifles, and are everywhere.

The Christian Quarter is near the Jaffa Gate, the most used entry into Old Jerusalem.  It contains the Church of St. John The Baptist and the Church of the Sepulcher, the site where it is believed Jesus was crucified and then buried.

The Jewish Quarter is quieter and cleaner than other parts of Jerusalem.  It contains the Western Wall and the Roman Cardo.

The Armenian Quarter is the smallest quarter and has an ancient feel because of its compact size.  It contains the Tower of David, just inside the Jaffa Gate, the Armenian Museum, and St. James Cathedral.  It is the first quarter you come to when entering through the most used gate, the Jaffa Gate.

The Muslim Quarter is the largest of the four quarters.  The streets are narrow, winding, and very crowded.  The Muslim quarter contains the Dome of the Rock, where Muslims believe that Muhammad ascended into Heaven, accompanied by Gabriel, the Monastery of the Flagellation where Jesus was flogged by Roman soldiers prior to His crucifixion, and is the first point on the famous Via Dolorosa, the first of the 14 Stations of the Cross.  Red, green, and black graffiti cover walls in the Muslim Quarter.  Those colors are the colors of the Palestinian flag.  T-shirts are sold with pro-Palestinian messages and Palestinian colors.

When you think of Jerusalem, you think of Holy sites but people live there, too.  Laundry was hung up to dry in many homes.

At the Corob Walk, near the Jaffa Gate, an Orthodox Jewish violinist played complete with his own sound system and hoped to sell CDs or receive donations.  At the Zion Gate a man played guitar and sang Gospel songs; he had no sound system and nothing to sell.  I talked to him and found he was from Ohio and made yearly trips to Jerusalem.  He recorded in Nashville with a producer and musicians who were my friends.  A man took a selfie in Jerusalem.  A mother pushed a baby stroller.  Men played cards on the street.

Much of the food, candy and spices, was sold unpackaged and open.  The customer just filled plastic bags with their selections.  Falafel, sometimes heart shaped, was cooked on the street.  Unpackaged bread was sold on the street.

Most shops were very small and, usually, only one person worked there.  Goods covered every inch of shops and spilled out of the store.  The small shops were all stone and Roman arches.

One frequented coffee shop was the Americanized Christ Church Coffee Shop which had roots and employees from the US.

If a shop had no business, the owner stood at the entrance and enticed passersby to come in and look at the shops goods.

I talked to a couple of people who said they owned, not rented, their shop.  One small restaurant was a husband and wife team.  She cooked and he waited on customers.  They were Moroccan Muslims and the shop was passed down from his father.  A picture of his father hung in a high spot overlooking the restaurant.  Many shops hung a photo of a father, grandfather, or spiritual leader.

I ate at this restaurant twice, the first time when the owner stood in the doorway and tried to get passersby to come in.  The food was good and the husband and wife were nice to talk to.  The second time we were there, a Jewish Holy Man came in dressed in the traditional fedora, long black coat, and wearing a long beard.  The owner introduced him as his very good friend.

When we finished eating and were ready to pay the check, I stood at the register with money in my hand.  The Jewish Holy Man motioned for me to approach.  When I did, he held out his hand to take my money.  I assumed the very good friend was going to accept payment in dollars, Israeli Shekels, or Jordanian Dinars on behalf of the owner while he was busy with another customer.  Instead, he took the money and put it in a bag.  I told him to give it back and he refused.

The restaurant owner came to see what was going on and talked to the Jewish Holy Man but he still didn’t say a word and refused to give the money back.  The owner was obviously upset with his very good friend and got more upset as he tried to get him to give my money back.

I could have fought the Jewish Holy Man and wrestled the money away from him or called the police.  I took the high road and told the restaurant owner there was no good solution.  My friend paid the bill because I didn’t have any money.  The restaurant owner was reluctant to take the money but we insisted.  The Jewish Holy Man robbed me of US dollars, Israeli Shekels, and Jordanian Dinars that I figured was worth about $50.

I hoped for a head and shoulder photo of an Orthodox Jewish man but wouldn’t have taken one without permission.  As we left the restaurant, I asked the thief if I could take his picture.  He shook his head no; so I took it anyway.  It pleased me that he didn’t want his picture made but there was nothing he could do when I took it.  I considered putting the photo in my photo gallery but I don’t want to see a photo of the thief again.

My one bad experience in Israel and Jordan – robbed by an Orthodox Jewish Holy Man in the Holy city of Old Jerusalem.  Let him explain that when and if he gets to Heaven.