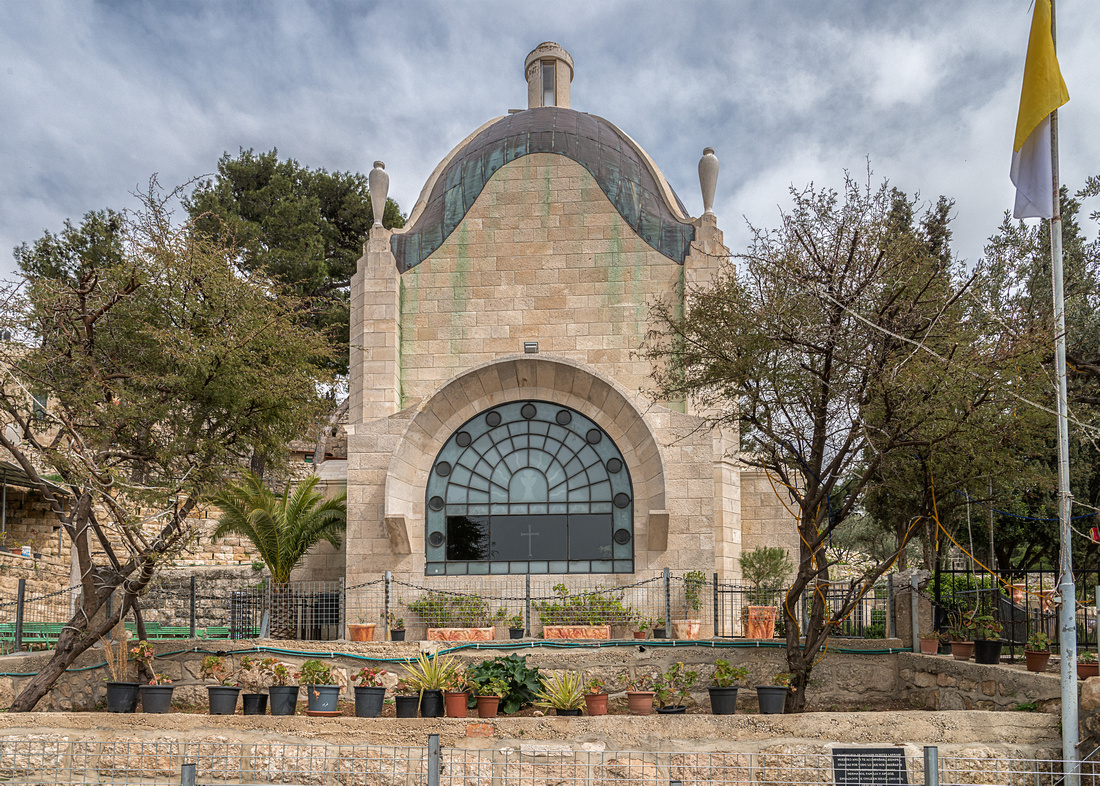 Most of the structures, tombs and buildings, on the Mount of Olives are thousands of years old but there is a new Catholic Franciscan Church that was built between 1953 and 1955, within the lifetime of many visitors.  It is halfway up the western slope of the Mount of Olives.  Dominus Flevit, meaning The Lord Wept, was constructed in the shape of a teardrop symbolizing the tears of Jesus.

When Jesus made His triumphant entry into Jerusalem on the first Palm Sunday, He wept as He looked down from the Mount of Olives and prophesied the future destruction of Jerusalem.

Enemies will “set up palisades (wooden fences) around you and surround you, hem you in on every side, and crush you to the ground”.  Within 40 years, in AD 70, Jesus’ prophesy was fulfilled when Roman legions besieged Jerusalem and, after six months of fighting, burnt the Temple and levelled the city.  The dramatic view from the Dominus Flevit makes it easy to imagine what Jesus saw as He looked down on Jerusalem and made his prophesy.

Dominus Flevit was built in 1955 but stands on the ruins of a Byzantine church from the 5th century and in an area of tombs dating back as far as 1,600 BC.  It was designed by the famous Italian church architect, Antonio Barluzzi, who also designed the Church of All Nations and the Mount of Beatitudes.  It was constructed in the shape of a teardrop, with tear phials (vials) on the four corners of its dome.  Behind the altar is a much-photographed picture window overlooking Jerusalem.  The cross and chalice in its arch-shaped design focus not on the Dome of the Rock but on the Church of the Holy Sepulchre.

Dominus Flevit is accessible by foot through a steep walkway from either the top of the Mount of Olives or from the bottom of the Mount of Olives near the Church of All Nations.  When we found Dominus Flevit, I was surprised to see it was behind 8-foot stone walls and the entrance was behind closed metal doors with barbed wire on the top.  I heard someone just on the other side of the metal doors and knocked to see if I could get their attention.  The door cracked open and I asked if we could come in.  The immediate question was, where were we from.  When I said the US, the door opened and we were allowed in.

That was the only church/shrine I encountered in Israel that was locked and the only one that asked where I was from before letting me in.  The reason was probably that the Arab/Israeli conflict is still going on at the Mount of Olives.  Arabs still destroy graves, attack mourners, and violate churches.  It makes sense to lock the doors.

When we got in Dominus Flevit, we found a small, beautiful church dedicated to the tears of Jesus.  The view from the courtyard was amazing.  There was a picture postcard view of the Mount of Olives and Jerusalem.  There was also a great view of Dominus Flevit’s next-door neighbor down the hill, the gold-domed Russian Church of Mary Magdalene (a witness to Jesus’ crucifixion); we would have paid it a visit but it was closed.  Another close neighbor was the Tomb of the Virgin Mary.

Dominus Flevit was very small but beautiful.  Not surprisingly, because of the 8-foot walls, locked metal doors, and barbed wire, we were the only visitors and were made to feel welcome.  The chapel’s picture window had a stunning view of Jerusalem.

As we were leaving, I was told the priest wanted to see us.  The church gets money from many countries in its collection plate.  He wanted to know if I would like to buy some US money that was in the collection plate but was harder for him to deal with.  He had coins taped up in one-dollar amounts and a few bills.  I bought them for the Israeli Shekels and Jordanian Dinar I had in my pocket and they opened the locked metal door for us to leave.