Wadi Rum - The Valley of the Moon 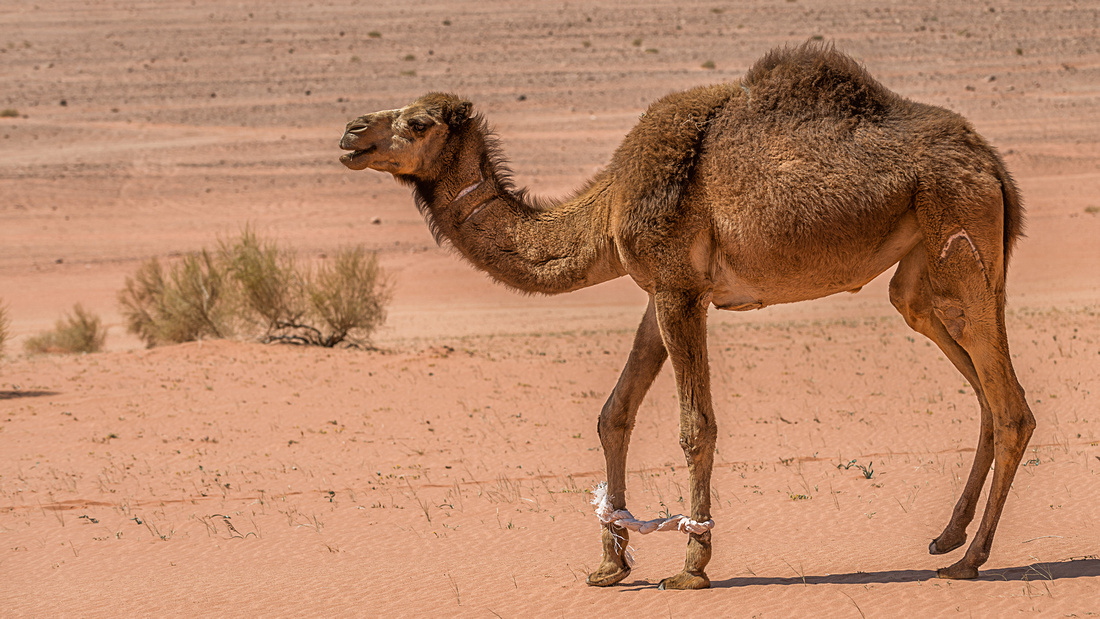 Wadi Rum, also known as The Valley of the Moon, is a valley cut into the sandstone and granite rock in southern Jordan, 37 miles east of Aqaba along the Desert Highway from Petra to Aqaba.  It is the largest Wadi (valley) in Jordan at 278 square miles.  Wadi Rum is Arabic for Sand Valley; Wadi means valley and Rum means sand, especially light sand that can be carried by wind.

It was named a United Nations Educational, Scientific and Cultural Organization (UNESCO) World Heritage Site in 2011 and is a protected area.

David Lean filmed much of his 1962 Oscar winning Best Movie, Lawrence of Arabia, starring Peter O’Toole, Alec Guinness, and Omar Sheriff, in Wadi Rum.  Due to his knowledge of the native Bedouin tribes, O’Toole’s character, British Lieutenant T.E. Lawrence (Lawrence of Arabia), is sent to Arabia to find Prince Faisal (Alec Guinness) and serve as a liaison between the Arabs and the British in their fight against the Turks and the Ottoman Empire.

In 2015, The Martian, starring Matt Damon, won a Golden Globe Best Picture Award, seven Academy Award nominations, including Best Picture and Best Adapted Screenplay.  Damon won a Golden Globe Award for Best Actor and was nominated for several awards including the Academy Award for Best Actor.  In this movie, Wadi Rum’s desolate features portrayed the surface of Mars.  The Martian is about an astronaut who is mistakenly presumed dead and left behind on Mars. The film depicts his struggle to survive and efforts to rescue him.

Many more movies and documentaries have been filmed in Wadi Rum.

Wadi Rum has been inhabited by many human cultures, including the nomadic tribe, the Nabataeans, since prehistoric times.  Wadi Rum is the site of petroglyphs etched into the cave walls depicting humans and antelopes dating back to the Thamudic times.  The village of Wadi Rum consists of several hundred Bedouin inhabitants with their goat-hair tents, concrete houses, and four-wheel vehicles.

Wildlife is plentiful but most are nocturnal and seldom seen in the desert sun.  There are birds, reptiles, insects, buzzards, steppe eagles, snakes, lizards, geckos, agamas, beetles, scorpions, and small furry animals like gerbils.  Wildlife has various ways to protect itself from the sun during the day.  Some hide under rocks or bury themselves in the sand.  Beetles walk on tiptoes to keep their bodies off the hot sand.

The plants you see most are short, woody shrubs - white saxaul, jointed anabasis, and hammada salicornica.  They provide an important food source for Bedouin goats and camels.  Camels won’t pass a shrub without having a bite and woody shrubs are great for starting a fire to cook food.  Shrubs that look dead are living, growing, and contain minimal moisture

After a long day in Petra, the tour bus drove us down the Desert Highway and dropped us off at a road that led to Wadi Rum.  Atieq, our Arabic guide to Wadi Rum, met us in a pickup truck and took us to the Bait Ali Bedouin Campsite.  Atieq was wearing the traditional Arabic headdress (keffiyeh) and long white robe (thoub) that provide protection from the sun, wind, and sand.  Atieq, like many Arab desert dwellers, was covered from head to toe.

Atieq picked us up at Bait Ali Camp the next morning for a long tour of the Wadi Rum desert.  Our transportation was a Toyota pickup – a favorite of Middle Eastern countries – that had two benches in the truck bed for about 8 people.  We had 4 people, my friend, Kenny, me, and a German mother (Christine) and daughter (Anne).  We saw Christine and Anne at the Jordanian border crossing and again in Petra.

Atieq drove us miles into the Wadi Rum desert and it was like being on another planet.  There were large stretches of sand and mountains of sandstone and granite.  Our tire tracks and footprints were the few signs of humanity.  There were no settlements but occasional powerlines strung across the desert.  In all this desolation, I saw a goat herder attending his flock of about a dozen goats.

And then, I ran into many free roaming camels.  I approached them and they seemed to have no fear of humans.  I learned that these were domestic camels that were branded and just allowed to roam.  Camels are very fast so, if the owner wanted to coral them, they might just run away.  Their front legs were tied together with a soft rope that allowed them to walk but not run.  It’s a beautiful thing to see free roaming camels in the open desert.

Atieq said he would answer any questions.  Yes, Jordanians can have more than one wife; he has two.  Everyone gets along and they like the arrangement.

Way out in the desert, Atieq decided it was tea time.  In the shade of the pickup truck, we sat in the sand and Atieq gathered dry shrub to make a fire for the hot tea.  Atieq rubbed the leaves of one shrub in his hand and moisture appeared.  It wasn’t much but apparently enough to keep a camel or goat alive.

Tea time in the desert.  What a nice end to an other-worldly day in the Valley of the Moon.