The Tower of David - The Citadel 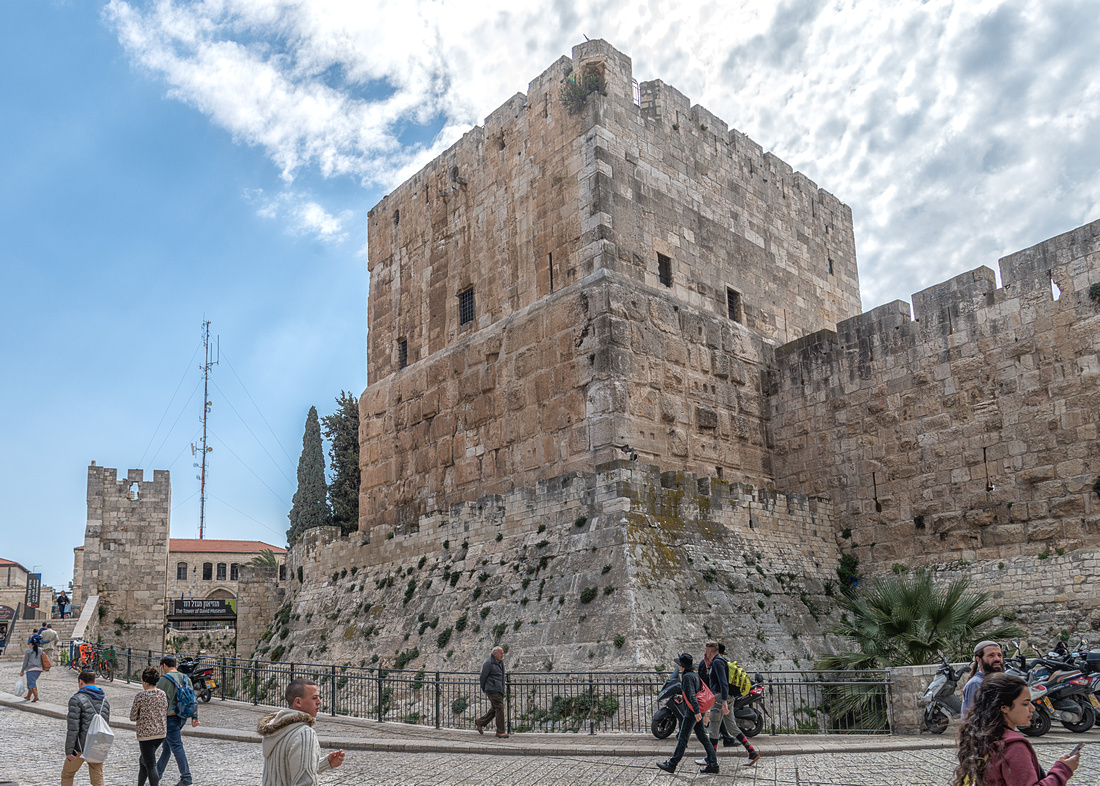 The Tower of David (The Citadel) is a walled, medieval fortress within the walled city of Old Jerusalem near the Jaffa Gate on the west side of Old Jerusalem and is the highest spot in Old Jerusalem.  The fortification, surrounded by a moat, was built as defense against an expected invasion from Sennacherib, the king of Assyria.  Construction began with the Hasmonean kings in the 2nd century BC.

Despite being called the Tower of David, the Citadel has no connection to King David. The roots of this mistaken identification date back to the Byzantine period when early Church fathers misinterpreted Josephus Flavius’ writings and attributed a tower from the time of Herod, the Tower of Phasael to King David.

The Tower of Phasael (named by Herod in memory of his brother) was also known as the Hippicus Tower.  There were three towers; the other two were named for Herod’s friend and general, Hippicus, who had fallen in battle, and for his favorite wife, Mariamne.

When Old Jerusalem was razed in AD 70, all three towers were left standing by the Romans in order to show off the strength of the fortifications the Roman Army had to overcome.

The Citadel was gradually built up under Muslim and Crusader rule and acquired the basis of its present shape in 1310 under the Mamluk sultan, Malik al-Nasir.  Suleiman the Magnificent later constructed the monumental gateway in the east that you enter through today.

The minaret (a tall, slender tower in a mosque with a balcony from which a muezzin calls Muslims to prayer), a prominent Jerusalem landmark, was added between 1635 and 1655, and took over the title of the Tower of David in the nineteenth century.  The name can now refer to either the whole Citadel or the minaret alone.

Of the original Tower of Phasael, some sixteen courses (horizontal layers) of the original stone ashlars (cut masonry) can still be seen rising from ground level and smaller stones, in a later period, added significantly to its height.

A minaret, built in 1635 by the Ottoman Empire’s Turkish rulers, was added onto a mosque which had been active in the Citadel during the Mamluk period. The minaret is mistakenly known as the Tower of David and is a symbol of Jerusalem.

Today, the Tower of David is a popular venue for benefit events, educational gatherings, craft shows, concerts, multi-media sound-and-light performances, and for its dramatic view of Jerusalem.

You enter on the east side of the Citadel via a bridge that spans the moat to the inner gatehouse built by Suleiman the Magnificent.

A surprise to me was that Chihuly Glass named Yellow Chandelier hung in the entryway.  Dale Chihuly is a world-famous, currently working, American glass sculptor whose works are considered to possess outstanding artistic merit in the field of blown glass.  Chihuly, the subject of many documentaries, wears an eye-patch over one eye due to losing an eye in an auto accident.

Chihuly’s most famous installation is a huge blown glass ceiling display at the registration area of the Bellagio Hotel in Las Vegas.  He has also had displays at Union Station in Tacoma, WA, the Atlanta Botanical Gardens in Atlanta, GA, Cheekwood Botanical Garden in Nashville, TN, the Denver Botanical Gardens in Denver, CO, and the Clinton Presidential Center in Little Rock, AR.  What a surprise to see Chihuly Glass in a medieval Citadel in Jerusalem.

A one-of-a-kind model created in 1872 by Hungarian pilgrim Stephen Illes depicts Jerusalem as it was in Illes’ time and is unique both for its many details and for the fact that it documents the city’s appearance prior to the significant changes it underwent in the 20th century. The model immortalizes the Jewish Quarter before it was destroyed in 1948.  Forgotten for 64 years in the attic of the Geneva Public and University Library, it was rediscovered in 1984.  In 1985, the model was transferred to Jerusalem and restored and is now exhibited on permanent loan at the Tower of David Museum.

A sculpture of two warriors on horseback outside the Tower of David is of Richard the Lionheart, King of England, and Saladin, the Sultan of Egypt and Syria and leader of the Muslim armies during the Crusades.

There was a calmness inside the walls of the Tower of David that contrasted with the street life of Old Jerusalem.  The courtyard was beautifully landscaped with desert greenery.  School children were attending an outdoor lecture in the courtyard.  There were museums related to the Tower of David, several different walking tours, and special events were always going on.

The ramparts, defensive walls with a high walkway around the Tower of David, command a breathtaking 360-degree view of Jerusalem: the Old City and the New City, the Four Quarters (Christian, Jewish, Muslim, and Armenian), the new neighborhoods, the Mount of Olives, Mount Scopus, the Judean Desert and the Dead Sea in the distance.  The Ramparts around Old Jerusalem are longer but the view from the Tower of David Ramparts is much higher and has the best view of Jerusalem.