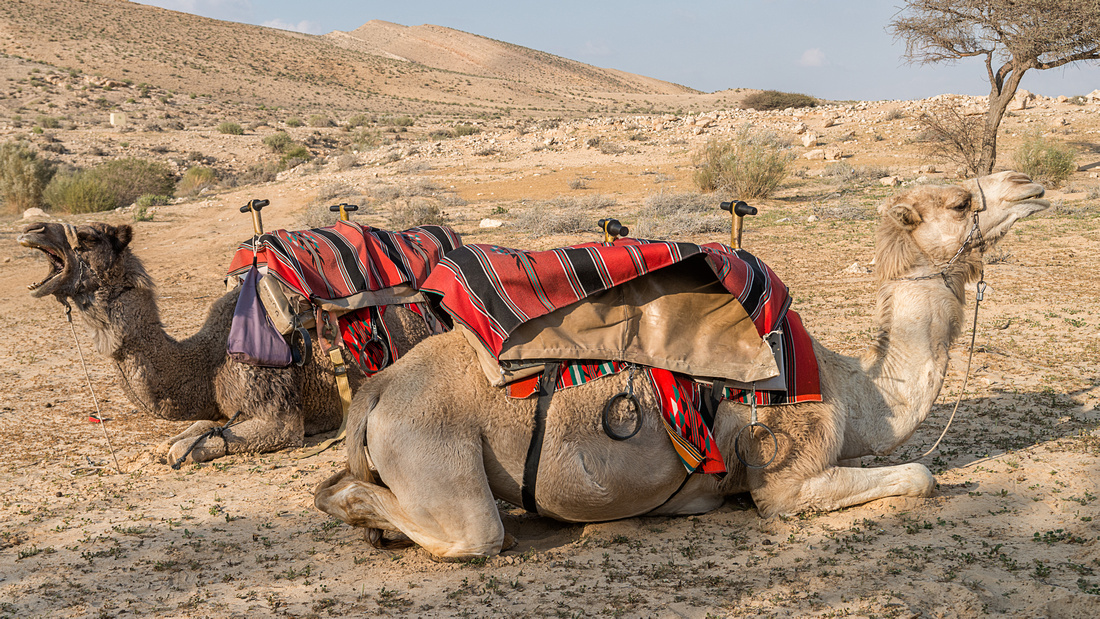 I always wanted to ride a camel but passed up a few opportunities to pose for a photo while sitting on one on the Mount of Olives in Jerusalem.  From Nashville, I researched and booked a two-hour camel ride into the Negev Desert at the Negev Camel Ranch.  That wasn’t easy – the camel ranch got the wrong date, the wrong number of riders, and the wrong length of the ride.  It took several emails over several days to get it straightened out.  When I got to the Negev Camel Ranch, I believe I saw what the problem was.  Two Bedouins were sitting on pillows presumably reading emails about booking a camel ride or booking housing.  No pencil and paper to write anything down.

The Negev Camel Ranch was established in 1986, over 30 years ago, in the Eastern-Negev, along the Northern Incense Route, near the ancient Nabatean city of Kurnub-Mamshit.  It is halfway between Be’er Sheva and the Dead Sea in the Negev Desert in Southern Israel between the Maktesh Hagadol (Big Crater) and the Maktesh Hakatan (Small Crater).

The camels people ride were all females because they have better dispositions.  They were trained from birth to carry humans and they were very gentle and forgiving of human ineptitude.  The camels kneel down so you can get on them but they are still pretty high off the ground.  When a camel stands up with a rider it is pretty easy on the rider but we were warned to push forward on a kind of saddle horn (pommel) when the camel sat down.  That didn’t make sense to me until later.

These camels were dromedaries, Arabian one-humped camels, and can be 6 feet tall at the shoulder.  The camel’s hump is another foot higher and a saddle goes over the hump which puts the rider about 7 ½ feet off the ground.  When I was mounted on top of the camel, I got the uneasy feeling, that if she fell, I would fall 7 ½ feet to the ground and might have a 1,000 pound camel land on me.

The saddle could accommodate two riders; when there was only one rider, that rider sat on the back side of the saddle.  There were stirrups and the saddle horn looked similar to a bicycle’s handlebars, not like a horse's saddle horn.  The camels were tethered together one by one behind the leader.  It reminded me of a Wal-Mart horse riding machine but I was riding a camel for two hours into the Negev Desert.  Each camel had a saddlebag that contained a bottle of water for the rider.

The camel caravan was five riders long – the lead Bedouin rider, a young German couple, me, and my friend Kenny bringing up the rear.  Another Bedouin rider rode free from the caravan and could go quickly to any rider who needed help.  That help was not needed on this ride.

In research, before I got to Israel, I learned that T.E. Lawrence, portrayed by Peter O'Toole in the movie, Lawrence of Arabia, got seasick when riding a camel.  The gait of a camel is quite different from that of a horse; they rock back and forth.  As an ounce of prevention, I took a motion sickness pill, Dramamine, before my ride.  After the fact, I don’t think it was really necessary, but the rocking motion of the camel was almost hypnotic and could make some riders seasick.

As we rode into the desert, we were up and down hills, in gullies, and through areas that were covered with loose sandstone and rocks that would have made me slide and fall if I were walking.  My camel stepped cautiously and never lost her footing.  A couple of times, I rubbed my camel’s head to say good ride.

One thing that surprised me was that a camel never passes a shrub without taking a bite.  I remembered the earlier demonstration in Wadi Rum where our guide, Atieq, rubbed dried shrub leaves in his hand and produced small amounts of water.

Our two-hour camel ride took us along the Northern Incense Route with a view of the Nabataean city Mamshit, Hitann Wadi, Yamin Plain, and Machlik Wadi.  Again, the air was very humid, but the sun could be deceptive.  Our camel guides and all riders wore long sleeves in layers – protection from the sun, wind, and the insects I never encountered.

A little better than halfway through our ride, the camels recognized a familiar resting stop.  When a camel decides to lie down, the front legs are on the ground first and that movement is pretty rugged for the rider.  A camel guide yelled at me to push forward on the saddle horn.  Then I understood.  Pushing forward didn’t control the camel but it made me lean back to keep from falling off the camel headfirst.  I was holding on to my camera with both hands before and not holding on to the saddle horn.  Just in time, I didn’t fall but learned a camel riding lesson.

The second surprise was how the backside of the camel went down.  It was as slow and gentle as the front end was rough.

The rest stop was a sort of oasis with some of the few trees we passed and a bit more vegetation.  It was a familiar, welcome rest stop for the camels.

Similar to how camels’ legs were tied together in Wadi Rum to keep them from running, a soft, thick rope was tied to keep the camel’s foreleg and upper leg together.  If the camel tried to stand, and they did, the tied leg would prevent them from standing.

When we were almost back to the Negev Camel Ranch, we saw a couple of desert homes with more than the usual desert vegetation.

When we arrived back at the coral, the camels sped up a bit and were obviously happy to be home.  My camel waited to sit down until after one of the other riders took a photo of me on camelback.  When the camel’s front legs went down, I was prepared and pushed forward on the saddle horn.  I rubbed the camel’s head again as I left. Thanks for a good ride.