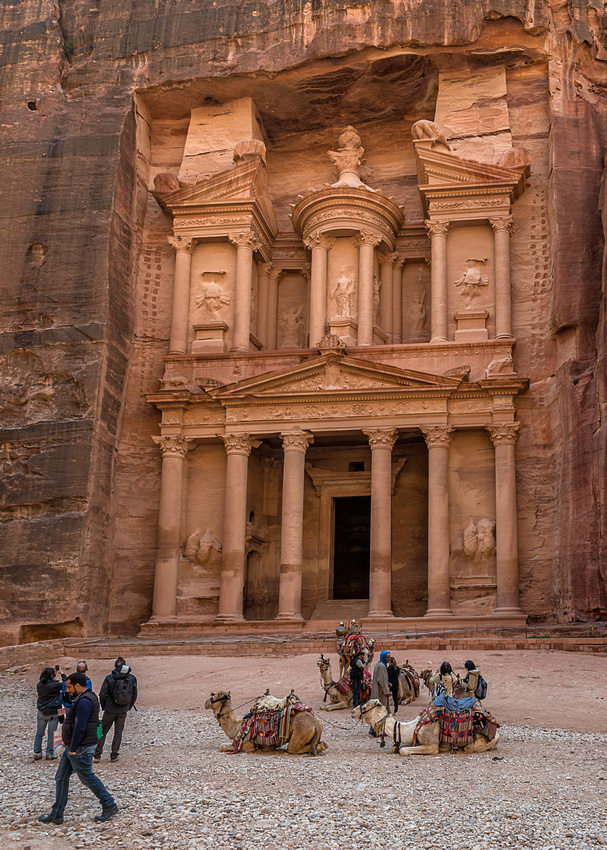 Petra is the most visited tourist site in Jordan and tourism is the main source of income for Jordan.  Tourist numbers peaked at about one million in 2010 then declined due to regional instability.  In 2017, tourist numbers were back up to 600,000.

Petra is believed to have been settled as early as 9,000 BC, 9,000 years before the time of Jesus.  It was originally known to its inhabitants as Raqmu and was the capital city of the Nabataean Kingdom.

The Nabataeans were a nomadic Bedouin tribe who settled Raqmu, now known as Petra, and a string of oases that made up an ancient caravan trade route.

Nabataeans roamed the Arabian Desert, moving with their herds to wherever they could find pasture and water.  They were particularly skillful in harvesting rainwater, agriculture, and stone carving.

The ability of the Nabataeans to control the water supply led to the rise of the desert city, creating an artificial oasis.  The area is visited by flash floods, and archaeological evidence demonstrates the Nabataeans controlled these floods using dams, cisterns, and water conduits. These innovations stored water for prolonged periods of drought and enabled the city to prosper.

Nabataea was conquered by the Roman emperor Trajan in AD 106 and annexed to the Roman Empire.  Nabataeans were converted to Christianity during the Byzantine Era.

Once the center of a thriving caravan trade route, Petra's importance declined as sea trade routes emerged and after a 363 earthquake destroyed many structures and crippled the vital water management system.  The population diminished from about 20,000 to just a few Bedouin nomads until Petra was rediscovered in 1812 by Swiss traveler Johann Ludwig Burckhardt.

The name Petra is a derivative of the Greek word petros meaning stone or rock.  In 1845, John William Burgon described Petra in a poem as a rose-red city half as old as time.  Rose-red described the color of the sandstone canyons of Petra.  Since Burgon’s poem, Petra has often been called the Rose City.

In October 1917, a revolt of Arabs in Petra was led by British Army officer T. E. Lawrence (Lawrence of Arabia) against the Ottoman regime.  The rebellions, with the support of British military, were able to devastate the Ottoman forces.

On December 6, 1985, Petra was designated a World Heritage Site.

I wanted to go to Petra on my first trip to Israel but the journey seemed long and difficult.  If you want to visit Bethlehem, Palestine, you really need to join a tour; it is ill advised or forbidden to drive a rental car from Israel to Bethlehem, Palestine, even though the distance is only a few short miles.  If you want to visit Petra, Jordan, you really need to join a tour and the journey is about 200 miles and takes a couple of hours one way.

I expected Petra to be an isolated canyon surrounded by nothing but desert but Wadi Musa (the valley of Moses) is a town of 7,000 people, hotels, restaurants, mosques, businesses, and homes that lies just outside of Petra.  The prophet Moses passed through the valley and struck water from the rock for his followers at the site of Ain Musa (Moses' water spring or Moses' Well).  The Nabateans built channels that carried water from this spring to the city of Petra.  The Tomb of Aaron, supposed burial site of the brother of Moses, is on nearby Mount Hor.

From Wadi Musa, it is a long walk into the canyons of Petra.  You walk a mile before you are really in the canyons.  Horseback Bedouins ride beside you and try to get you to pay for a ride into the canyons.  We were warned that adult and juvenile Bedouins could be relentless in trying to sell their services or goods.  One Bedouin on horseback followed me a long way and insisted that I should ride even though I kept telling him no.  I finally turned my camera toward him and took a photo.  He said, “no photos”.  I said, “no sales pitches” and he left to pursue another potential customer.

Fellow travelers were so besieged by Bedouin salesmen that they eventually got in their face and yelled no.  The salesmen were used to very stern no answers and that didn’t phase them.

One young Bedouin boy, probably 8 years old, followed me and tried to sell postcards of Petra.  He started by asking $5 for the postcards.  When I said no, he asked for $3 and eventually got down to $1.  He noticed that the Arabic headdress (keffiyeh) I was wearing was loose and offered to tie it very tight and very well.  I asked how much that was going to cost.  He said, whatever you want to pay.  I said, what if I buy your postcards for the first price you mentioned and you retie my keffiyeh. That was a deal.

He had me sit down in the middle of the walkway and he did a great job of retying my keffiyeh.  I ran into the boy several times while I was in Petra.  He didn’t try to sell me anything else but he shook my hand and introduced me to other young Bedouin salesmen as if we were old friends.  For that day, we were.

The walk through Petra was miles long.  I passed poor, small, or uncompleted carvings in narrow sandstone canyons.  The Siq, literally the shaft, is the main entrance into Petra.  It is a dim, narrow gorge, in some points no more than 10 ft. wide, and goes approximately 3/4 of a mile and ends at Petra's most elaborate ruin, Al-Khazneh (The Treasury) which is believed to have been the mausoleum of the Nabatean King Aretas IV in the 1st century AD.  Its construction involved hired Greek architects.  It became to be known as Al-Khazneh, or The Treasury, in the early 19th century by the area's Bedouins who believed it contained treasures.

Most people are familiar with The Treasury a scene in the 1989 movie, Indiana Jones and the Last Crusade.

Archeologists have discovered that large Petra carvings like The Treasury were carved from the top down.  At the highest point of the carvings, scaffolding was built into the sandstone and, when that layer was completed, the scaffolding was lowered so the next level could be carved.

The Petra Theater is an AD 1 Nabataean/Roman theater carved mostly out of rock that seats approximately 8,500 people was positioned to bring the greatest number of tombs into view.

Along the Siq and other Petra pathways, you pass horses, horses and buggies, camels, and donkeys. There are refreshment stands and there are trinkets for sale.  And there are the ever-present Bedouin salemen, adult and juvenile.

The wind in the canyons blew up an occasional sandstorm.

I passed a Bedouin musician playing a homemade, rebab, single-string, Arabic folk violin for tips.  His granddaughter, I suppose, sat next to him.  They were both dressed from head to toe, she in colorful Bedouin clothing.  I’m sure he got more tips with her sitting beside him but I felt sorry for her and wished she had been playing like any young girl.  The look on her face said that she wished the same thing.

After a day in Petra, I relaxed, contemplated the day, and ate hummus, pita bread, and hot tea at one of the many restaurants in Wadi Musa.