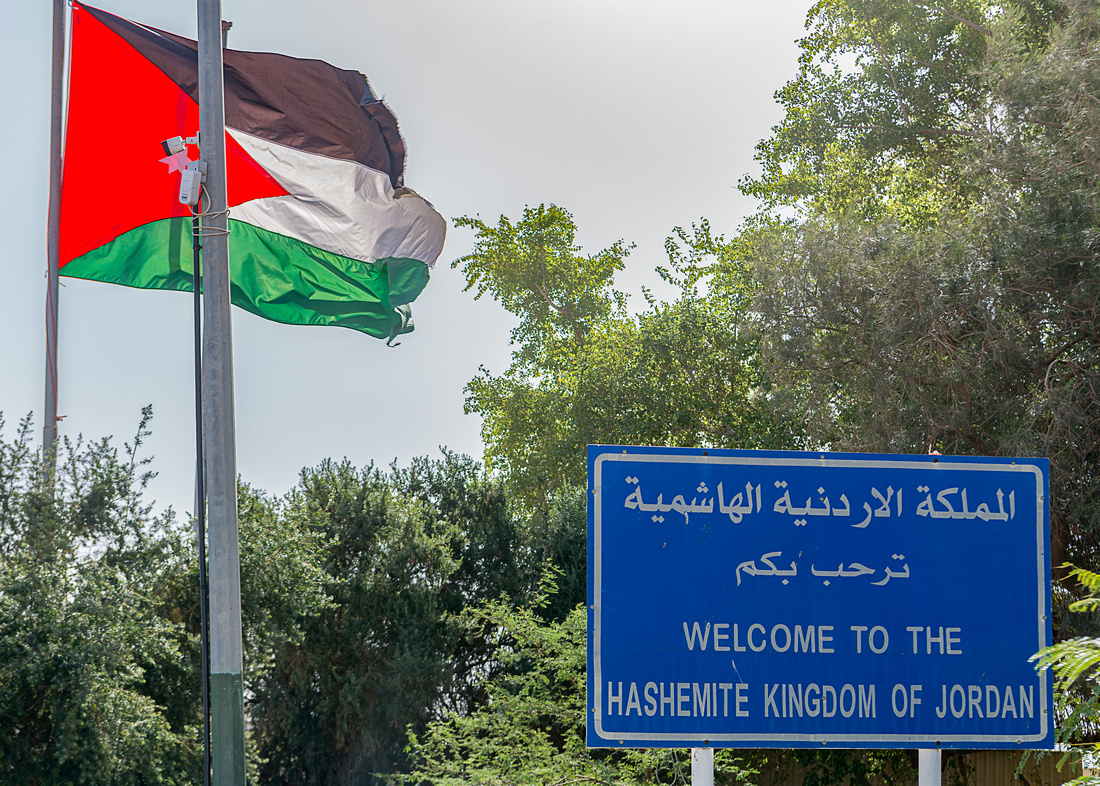 Welcome to the Hashemite Kingdom of Jordan

I arranged a two-day tour to Jordan before I left the U.S.  There are two places where you can cross the border into Jordan from Israel to go to Petra.  I chose to cross at Eilat, Israel.

Eilat is a port town and resort town in the Southern Negev Desert of Israel just across the Red Sea from Egypt.  It is at the southern end of the Red Sea on the Gulf of Aqaba and is famous for its beaches, coral reefs, nightlife, and desert landscapes.

Eilat is the southernmost city in Israel, about 200 miles south of Jerusalem and is on the border of four countries – Israel, Egypt, Jordan, and Saudi Arabia.  It is amazing to stand on the shore of the Red Sea and see four Middle East countries with such varied histories and in such varied current states.

Neighboring countries have invaded through Eilat in the past so Israel built the Israel-Egypt barrier, a steel barrier equipped with cameras, radar, and motion sensors along the country's southern border.  I took a couple of cellphone photos of the bank of the Red Sea at Eilat, a stone's throw from Egypt, where metal wires roped off the surf and a sign said no passage.  Another sign warned, in several languages, that this was a no swimming zone.

You can get a visa on the day of travel to Jordan but I chose to get a visa before leaving the U.S.  I sent an application form, visa fee, date and reason for travel (tourism), length of stay, and my passport to the Jordanian Embassy in Washington, D.C.

A friend asked, what if the promised turnaround is delayed and you don’t have a passport before your trip?  No need to worry.  After a call from the Jordanian Embassy to clarify something on the application, I got the passport and visa back in record time.

I booked a basic hotel for the night before entering Jordan.  The hotel had about 12 rooms but no front desk.  You had to check in before some evening hour.  I let them know when I expected to arrive but I arrived early and couldn’t get in the hotel; the door was locked and no one was there.  I didn’t know the hotel sent me email on the day before the booking with further instructions about checkin.  Phone calls and texts worked well in Israel but email was very spotty and I didn’t get the message.

A couple who also booked the hotel arrived and couldn’t get in.  I called the number that was posted on the front door and the owner/manager came to let us in.  He gave a tour of the room and hotel and answered questions.

I didn’t see anywhere to park.  The manager said there was a public park about a half mile away with free parking.  I asked if I could park there for several days while I was in Jordan.  Yes.  I worried about the security of parking for days in a public space that was busy during the day but almost empty at night.  I had no choice.

The next day, a man in a pickup truck picked me up for a ride to the Jordanian border at Aqaba.

At the border crossing station in Jordan, you are welcomed to the Hashemite Kingdom by a huge portrait of King Abdullah II bin Al-Hussein, the 41st-generation direct descendant of Muhammad.  Hashemites are members of an Arab princely family claiming descent from Hashim, the the great-grandfather of Muhammad.  Abdullah's father was King Hussein who ruled Jordan from 1952 until his death in 1999 when Abdullah became king.  The Hashemite family has ruled Jordan since 1921.

The Hashemite Kingdom of Jordan got the name Jordan because it is bordered on the west by the Jordan River.  The Dead Sea is also part of its western border.  Jordan is a landlocked country, except for a small shoreline on the Red Sea at its southern tip in Aqaba.  Its neighbors are Israel, Palestine, Syria, Iraq, and Saudi Arabia.

At the border crossing station, there are the usual customs checkpoints, metal detectors, duty free shops, and opportunities and time to buy food and mementos.  One area was fenced off and looked like it housed prisoners.  An elevated guard station, unoccupied as far as I could tell, looked like it belonged in a 1950s prison movie.  Signs in Arabic or Hebrew gave me no clue about the area.

A sign warned that there would be a $98 fine (70 JOD – Jordanian Dinar), paid in cash, if you stayed in Jordan fewer than three nights.  Jordan welcomes tourism, is very hospitable to tourists, and wants you to stay a few nights.  The border crossing town of Aqaba, just across the Red Sea from Eilat, is a place where you are encouraged to stay a while, eat, buy things, and spend money.  Tourism is big business in Jordan.

We were loaded onto a bus in Aqaba for the 85-mile, two-hour trip to Petra, Jordan.  The trip took 2 hours along the Desert Highway and the King’s Highway.

The first thing I noticed was what I didn’t see.  Southern Jordan has very little vegetation.  It is a desert and is sparsely populated.  Buildings, the occasional public buildings, homes, and small businesses, are mostly ramshackle with façades of buildings in usually undecorated, unpainted stone.  Convenience markets – I didn’t get to stop – appeared to have rooms added as needed with no thought of consistent architecture or building codes.

Jordan is known for its governmental stability and hospitality toward refugees.  Not only is it considered one of the safest countries in that region but it also has managed to keep terrorism out of its borders.

Jordan is a major medical tourism destination.  According to the World Bank, Jordan is considered the best healthcare service provider in the Middle East and patients come from all over the world.

Of the 9.5 million population of Jordan, 4 million, 42% of the population, live in the northwest city of Amman, Jordan’s economic, political, and cultural center, about 160 miles east of Jerusalem.  About 2.1 million Palestinian refugees, 1.4 million Syrian refugees, and thousands of Iraqi Christian refugees live in Jordan.  The dominant religion is Sunni Muslim at about 95% of the population.

Southern Jordan is sparsely populated, barren dessert, and barren mountains with little annual rainfall.  Copper, magnesium, phosphates, potash, and shale oil are natural resources but are not a big part of the economy.  Jordan has the 5th largest oil-shale reserves in the world, which could be commercially exploited in the central and northwestern regions of the country.  Forests cover about 2% of Jordan - the international average is 15% - making it one of the least forested countries in the world.

The Disi Aquifer in the desert of Southern Jordan supplies water for Jordan, including Amman and other large Jordanian cities.  Only a small part of the Disi Aquifer lies under Jordan; most of the aquifer lies under Saudi Arabia which also pumps water from the aquifer.  Jordan is the world's second poorest country in terms of water resources per capita and scarce water resources were diminished by the influx of Syrian refugees.

The view along the route to Petra was starkly beautiful but i wondered how people lived in this desolate area.  It reminded me of poverty-stricken places in other countries, including the US.

In the open desert, a man herded goats and a person with a child on their shoulders was followed by a donkey with cargo bags.  Only light construction was going on and the workers were covered from head to toe in the unpredictable desert climate.

Homes and businesses were surrounded by old tires, cars that no longer ran, broken chairs, and all things broken down and discarded.  There was no vegetation growing around properties, only dirt, sand, and rocks.  Fences made of unpainted concrete blocks enclosed many properties.

Bedouin tribes used to be almost 100% nomadic, migratory people; the term Bedouin comes from an Arabic word that means desert dweller.  In recent years, Bedouins have become less nomadic and have settled in camps that include several dwellings surrounded by a concrete fence that keeps strangers out and keeps goats and other livestock in.  There are about 4 million Bedouins worldwide and many live in Israel and Jordan.

I would have stopped at one of the convenience markets on the route but the tour bus only stopped once and that was at a large gift shop that had a brightly painted, deteriorating exterior that seemed designed to appeal to foreigners.

On the several tours I had to join in the Holy Land, tourists were warned not to buy from vendors we passed on the street but to wait until the tour director took us to a place where it was safe to buy.  That was also a place where the tour director got a kickback from the gift shop.  When we arrived at our "safe" Jordanian gift shop, we were greeted outside the front door by two Jordanian girls who offered cups of hot tea with a smile.

Sales people followed customers around the store and suggested purchases.  A keffiyeh, an Arab headdress designed to protect the wearer from the heat and sand of the desert, was priced at about 10 times what it sold for in Jerusalem.  If you complained about the high prices, you were told that profits from the store helped local children.  I bought a keffiyeh at a high price, mostly in anticipation of need and partly because it made me look touristy cool.