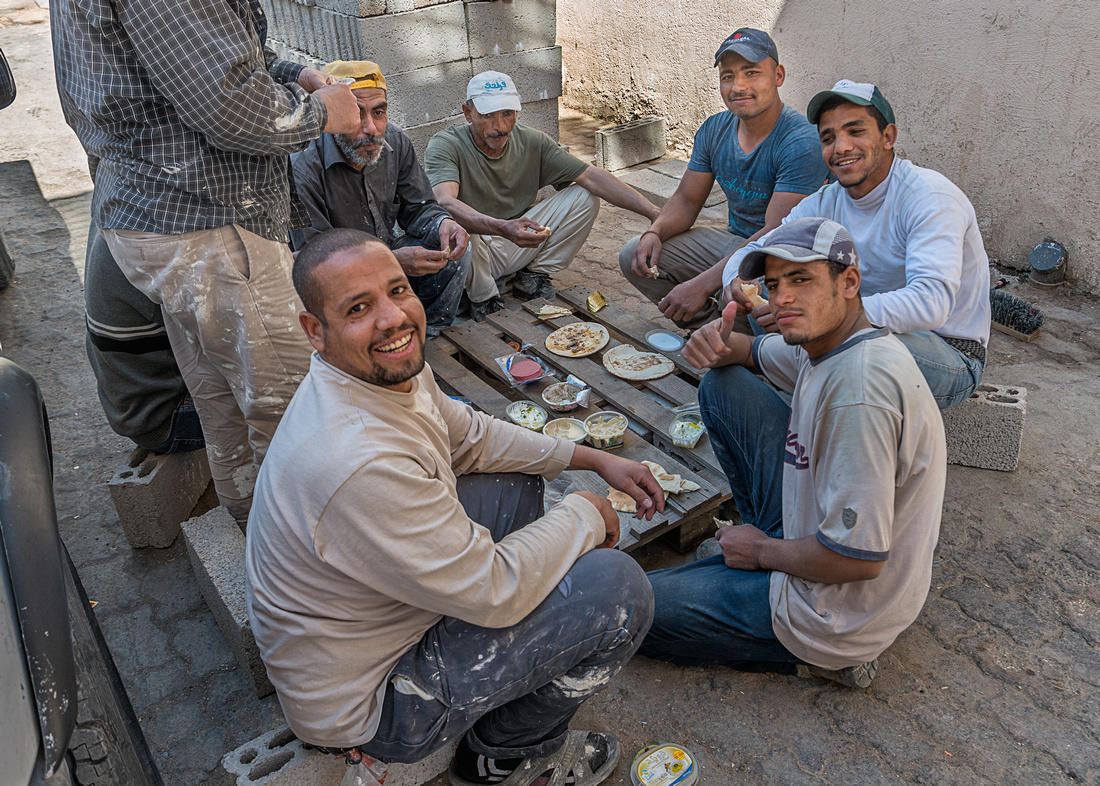 After two wonderful days in Jordan at Petra and Wadi Rum, we headed back down the Desert Highway to Aqaba, the Bride of the Red Sea.  Aqaba is the only coastal city in Jordan, an otherwise landlocked country, and the largest and most populous city on the Gulf of Aqaba at 150,000 people.  It has been inhabited since 4,000 BC.

Aqaba plays a major part in the Jordanian economy through tourism and trade.  Its strategic location and proximity to copper mines made it a regional hub for copper production and trade in the Chalcolithic (copper age) period.  Its proximity to Petra and Wadi Rum places Aqaba in Jordan’s Golden Triangle of tourism.  Its access to the Gulf of Aqaba makes it Jordan’s only port.  Aqaba's location at the northeastern tip of the Red Sea between the continents of Asia and Africa, has made its port important over the course of thousands of years.

The Great Arab Revolt's Battle of Aqaba, depicted in the film, Lawrence of Arabia, resulted in victory for Arab forces over the Ottoman (Turkish) defenders.

The road from Wadi Rum to the Desert Highway is little more than a gravel road.  The Desert Highway is paved but passes through areas where goats roam the highway.  Signs in Arabic gave me little clue about the area.  We passed an occasional mosque and a guarded checkpoint.  A small fishing boat was displayed in a fenced area like a shrine but I have no idea of its historic significance.

Aqaba looks like any mid-sized city with shops, hotels, and recognized America fast food restaurants.  The tour could have taken us right to the border to Eilat, Israel, just across the Red River, but they built in a 3 hour stay in Aqaba so we could shop in the duty-free stores and add to the Jordanian tourist economy.  Fair enough.

The highlight of the stay in Aqaba, to me, involved workers who were on a lunch break.  A little explanation.  When I was at the Sea of Galilee in 2008, I passed a man who was sitting on a boulder and fishing.  That story is in my blog about the Sea of Galilee.  When I asked if he was catching anything, he shook his head no and put his fingers to his lips while he said, speak.  Don’t speak?  Fishermen often don’t like talking near their fishing spot.

I walked up to Calpernius and, as I walked back past an old car, I saw that fisherman and his wife cooking fish for dinner in a can on a Bunsen Burner.  He motioned for us to sit down and join their dinner.  I realized that what he was saying when I first passed him was that he couldn’t speak.

His car was old and beat up and looked like he and his wife might have slept in it.  They were wearing dirty clothes.  Here was a man who wasn’t fishing for sport; he was fishing to feed his family.  He had next to nothing but he was willing to share it with strangers.  I thanked him and said we had to get to Acre by sundown to shoot a lighthouse and didn’t have time.  No, they didn't understand English.  I’ve always regretted that I didn’t sit down and visit for 5 minutes with a fisherman on the Sea of Galilee who showed me the most spiritual moment of the entire trip.

So, when I passed a group of workers sitting on a pallet in an alley between two buildings on a lunch break in Aqaba and they motioned for me to sit down and join them, that’s exactly what I did.  One of the workers went for drinks and brought drinks back for me and my friend.  I sat on a cinder block – fell off once while holding my camera and camera bag – and ate the usual pita and hummus.  One of the workers even reminded me I was holding the pita wrong and should hold it folded over to spoon the hummus up.

I quickly realized that the workers only knew a few words of English between them but that didn’t stop them from laughing and having a good time, especially when they had to help me up after I fell off the cinder block with my camera.  They were workers from nearby Egypt.  They were obviously finishing construction on one of the fast food restaurants we never got to.  We asked if they were painting.  They didn’t understand.  Sheetrock?  They didn’t understand.  Drywall?  One man said, excitedly, we do.

When lunchtime was over, we stood up and the workers and I looked at each other like we couldn’t just walk away but we had no words in common.  I reached my hand out and shook hands with each man before they went back to work.  I took a few photos of my new friends and my friend from KY.

You don’t need a common language to meet new friends and have a lunch you’ll never forget.  I still wish I had joined the fisherman and his wife for 5 minutes at the Sea of Galilee.  Live and learn.

The border crossing back into Israel was less complicated than entry into Jordan and we were off for more Israeli adventures.