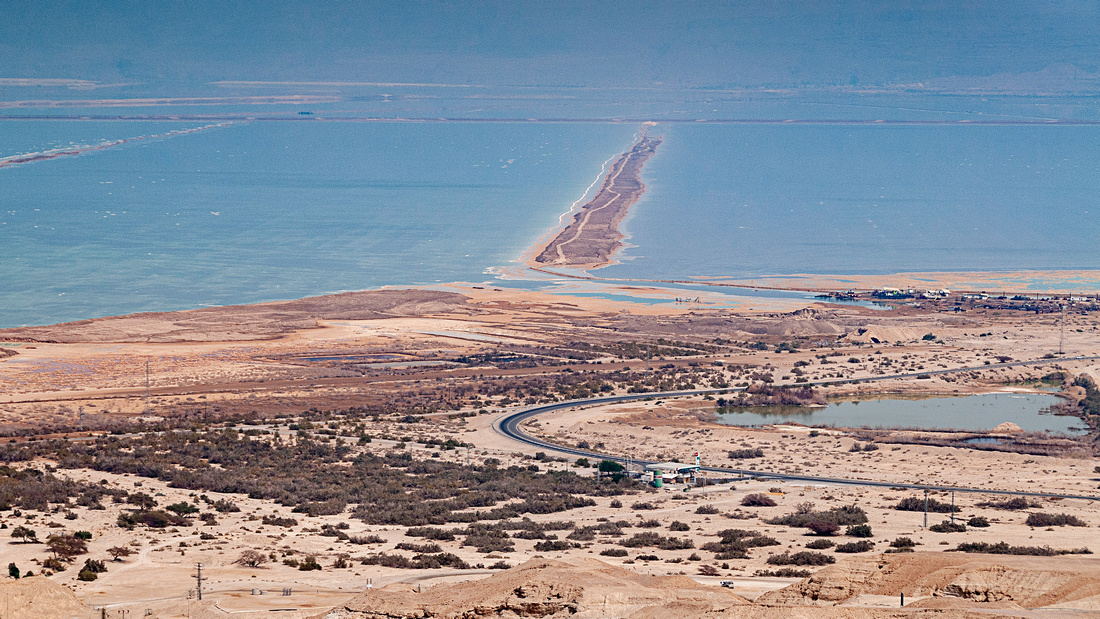 On many trips to the Dead Sea and the Dead Sea area, I took the advised, safer, rental-car-legal route from Jerusalem that avoided the shorter route through Palestinian territory.  It is a 120 mile, 2-hour trip.

The Dead Sea is south of Jerusalem but I traveled westward on Highway 1 toward Tel Aviv, southward on Highway 6 within 8 miles of the volatile Palestinian Gaza Strip where Hamas rockets are routinely fired into Israeli territory, through Be’er Sheva, eastward on Highway 60 and Highway 31 through the Negev Desert (Negev is from a Hebrew word meaning dry), past Bedouin encampments, ancient dwellings, and downhill for miles to the Dead Sea, Masada, and the resorts of Ein Gedi.

As you travel through the Negev Desert, signs tell you how far you are below sea level until you reach the Dead Sea, 2 ½ miles below sea level, the lowest point of land on earth.

The Negev Desert landscape is barren and you never know what you will see.  I passed a stack of 100s of barrels that might have once contained oil or industrial waste, abandoned cars pushed down into desert valleys, free-roaming camels, a nuclear test facility, sparse flora and fauna, and young Bedouin boys smiling as they rode donkeys or fine looking Arabian horses while wearing sandles.

When you get your first look at the Dead Sea from the Negev desert above, the view is stunning but, in several trips to the area, I never saw anything but a drab, hazy sky, no glorious sunrise or sunset.

The Dead Sea was formed in the Jordan Rift Valley in a fault called the Dead Sea Transform Fault.  It is an endorheic lake, meaning it has limited drainage and that it normally holds water and allows no outflow.

The Dead Sea is about 1,000 feet deep and is the deepest hypersaline lake on earth.  It is almost 10 times as salty as the ocean.  Its salinity makes a harsh environment where plants and animals can’t flourish.

Ein Gedi was one of the world’s first health resorts and was used as a health resort by Herod the Great who also inhabited nearby Masada.

The Dead Sea is 31 miles long, north to south, and 9 miles wide, west to east.  Most of the shoreline of the Dead Sea is in Jordan.

The Dead Sea has provided a number of products, including asphalt for nearby Egypt’s mummification, potash for fertilizers, and salt and minerals for cosmetics.  Industrial evaporation pans harvest potash and other minerals in berms that stretch out into the water.

A plaque in Hebrew on a humanoid statue says “Meir Nahner:  Engineer and pioneer.  One of the first employees of the Potash Factory was one of the initiators and establishers of the Dead Sea dams.”  Thanks to Jennie for the translation.

The Jordan River is the Dead Sea’s primary inflow and there are no outflows.  The Dead Sea’s level is falling quickly, about 3 feet a year, because not enough water is being supplied by the Jordan River, because of evaporation in the hot climate, typically 104 degrees Fahrenheit in July and August, and because of low rainfall, less than 2 inches a year.

In 2018, Jordan is building the first phase of a Red Sea-Dead Sea Water Conveyance project that will bring water to neighboring countries and carry brine to the Dead Sea to stabilize the water level.  The first phase of the project is scheduled to be completed in 2021.

My biggest regret after many trips to the Dead Sea is that I didn’t get to visit an Ein Gedi resort where you cover your face and body with mineral rich, dark, Dead Sea earth and swim in the Dead Sea which is so saline that you float on top of the water.

The best I could do was to wade in the Dead Sea because I didn’t want to get a locker to store my clothes and camera.  Next time.

People of all shapes and sizes were swimming, wading, and otherwise enjoying the day.  One young boy was in his underwear and was accompanied by his grandfather.

The big surprise was how thick and mucous-like the water was.  There was a public water hydrant to wash off but washing was more difficult than washing off ocean water.

In this area, God destroyed Sodom and Gomorrah with Sulphur and fire and Lot’s wife was turned into a pillar of salt for looking back at the destruction.  On the eastern side, the highest visible peak is Mount Nebo, where Moses glimpsed the Promised Land.  Further south stands the fortress of Machaerus, where Herod Antipas imprisoned and then executed John the Baptist.  On the western side, from north to south, are Qumran, where the Dead Sea Scrolls were found, Ein Gedi, where David hid from King Saul in a cave, and Herod the Great’s fortress of Masada.

The Dead Sea, surprisingly, has its own McDonald’s.  McDonald’s were everywhere in Israel.

Unlike recent blogs, most of the Dead Sea photos in my gallery are from 2008.

And finally…the term, the Dead Sea, never appears in the bible.  The ancient Hebrews called this body of water the Sea of Salt.  Other ancient names include the Sea of Solitude, the Sea of Arabah, and the Asphalt Sea. The Crusaders called it the Sea of Satan.

By whatever name, it was a spectacular site.