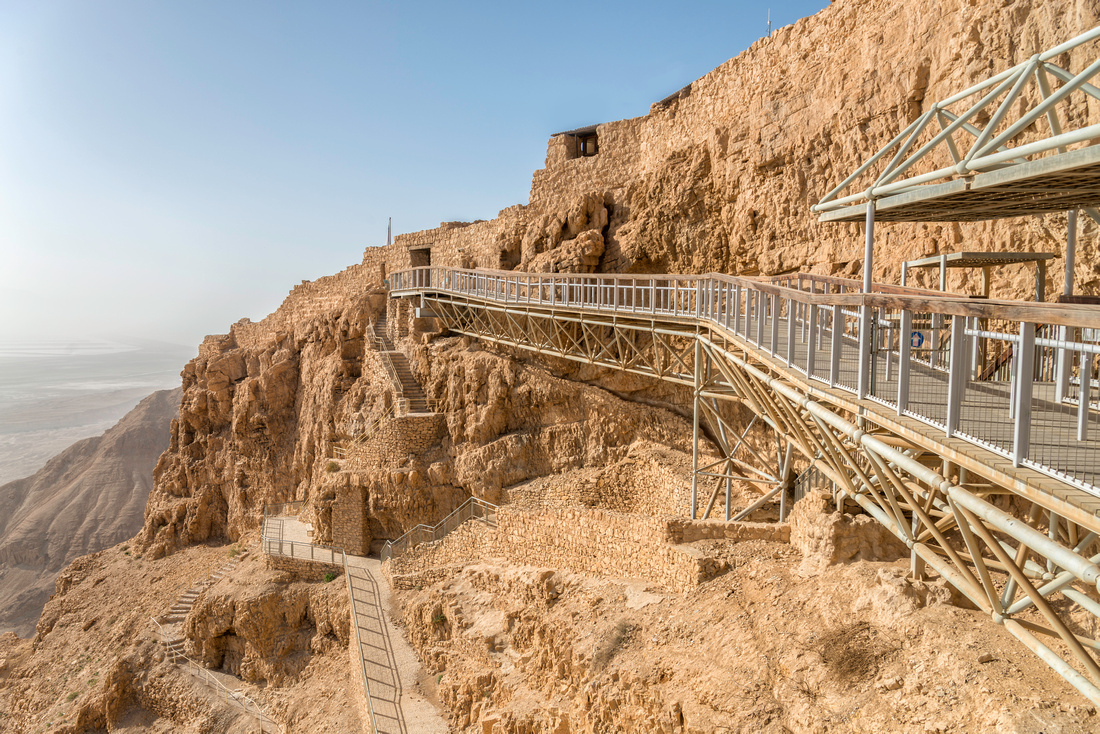 Masada, one of Israel’s best-known and most popular tourist attractions, is a fortification in the Southern District of Israel situated on top of an isolated mesa.  It is located on the eastern edge of the Judaean Desert, overlooking the Dead Sea, the lowest point on Earth’s land, 1,300 feet below.  The Dead Sea is 2 ½ miles below sea level.  Masada means fortress and it’s easy to see that it would have been a very difficult fortress to conquer in the first century AD.

Herod the Great built two palaces for himself on the mesa and fortified Masada in case of revolt between 37 and 31 BC.  The eventual siege of Masada by troops of the Roman Empire at the end of the First Jewish–Roman War, in AD 73, ended, by legend, in the mass suicide of 960 people, Sicarii rebels, an extremist Jewish splinter group, and resident Jewish families hiding there.  Only 2 women and 5 children survived.

As with many stories in Israel, there is a conflicting report.  Contemporary Jewish historian, Titus Flavius Josephus, wrote that Judaism prohibits suicide so the defenders drew lots and killed each other down to the last man who would be the only one to actually take his own life.  If true, that story makes me wonder if murder was considered a lesser sin than suicide.

There are two routes to Masada from Jerusalem.

The shortest trip from Jerusalem to Masada is about 65 miles, takes about an hour and a half, and goes through some parts of the West Bank that are controlled by Palestine.  Route 1 and Route 90 take you eastward into the West Bank toward Bethlehem and then south to Masada and the Dead Sea.  Israeli citizens are forbidden to enter Palestinian controlled areas and car rental companies ban that route.  I did take a cab for most of that route with no consequences but that’s a long story.

Route 6 takes you westward toward Tel Aviv, south to Be’er Shiva, and then eastward to Masada and the Dead Sea.  The trip from Jerusalem is about 110 miles and takes about 2 hours.  This is the route I took for many rental car trips to the Masada/Dead Sea area on two Israeli trips.

As you get closer to Masada and the Dead Sea, you go steadily downhill past many signs that tell you how far below sea level you are.  I passed camels on a distant hill, Bedouin campsites, an unexpected McDonald's, and a young boy happily riding a donkey.

On my first trip to Israel, I made 3 or 4 failed attempts to see Masada.  On the 1st trip, I was met at the gate by a guard with an assault rifle and a revolver.  He said one word – closed.  I made note of the closing time and got there the 2nd time only to hear closed again.  I believe it was Shabbat and Masada closed early.  The reason I couldn’t get in the 3rd and 4th times escapes me but I left Israel without seeing Masada.

On my 2nd trip to Israel, Masada was at the top of my list and I had Masada’s open and closed times in my schedule.  My research said you could take the cable car up the side of Masada or take the Snake Path, a barren, winding trail to the top of Masada that you could hike before daylight to see the sun rise over the Dead Sea.

When I got to Masada, before sunrise, I was told you couldn’t hike the Snake Path until Masada opened at 8 am and sunrise would be over by the time you made the hour to hour and a half hike to the top of Masada.  I took the Cable Car for a 3-minute ride a half mile up to Masada.

As someone who often chases sunrises and sunsets, I can tell you sunrises are most often fickle.  Sunrise over the Dead Sea, or what was left of it, was very drab and hazy.  Next time.

Masada was built as a fortress by Herod the Great.  He built two palaces for himself, lodging for an elite group, storehouses, barracks, an armory, and cisterns to capture rainwater. The top of Masada was 1,800 ft. by 890 ft.  A 4,300 ft. long, 13 ft. high casemate, a fortified double wall, surrounded the mesa.  During the long siege of Masada, some people lived within the double walls of the casemate.

There were always several tours going on that you could tag along with.  I joined a couple of English speaking tours and heard descriptions of structures and names of people who lived at Masada.  As usual, I don’t remember much of what was said.

After 2 or 3 months of siege, the Romans used 15,000 men, 9,000 soldiers and 6,000 Jewish prisoners of war, to build a circumvallation wall to contain inhabitants of Masada.  Then, they began construction of a siege ramp against the western face of Masada, the side that faces away from the Dead Sea, and they moved a battering ram up the siege ramp to get past the casemate walls.    it was amazing to know that people lived at Masada about 37 BC and the Roman siege took place in AD 73.

And last, even at Masada, you exit through the giftshop.

Speaking of BC (before Christ) and AD (anno Domini – in the year of the Lord), in my research, I found that the reference to Christ or Lord is considered offensive by many, including the British Broadcasting Company (BBC), Wikipedia, schools, and in academic settings.  They have substituted the terms BCE (before common era) and CE (common era).  At the risk of being politically incorrect…again, I will continue to say BC and AD.