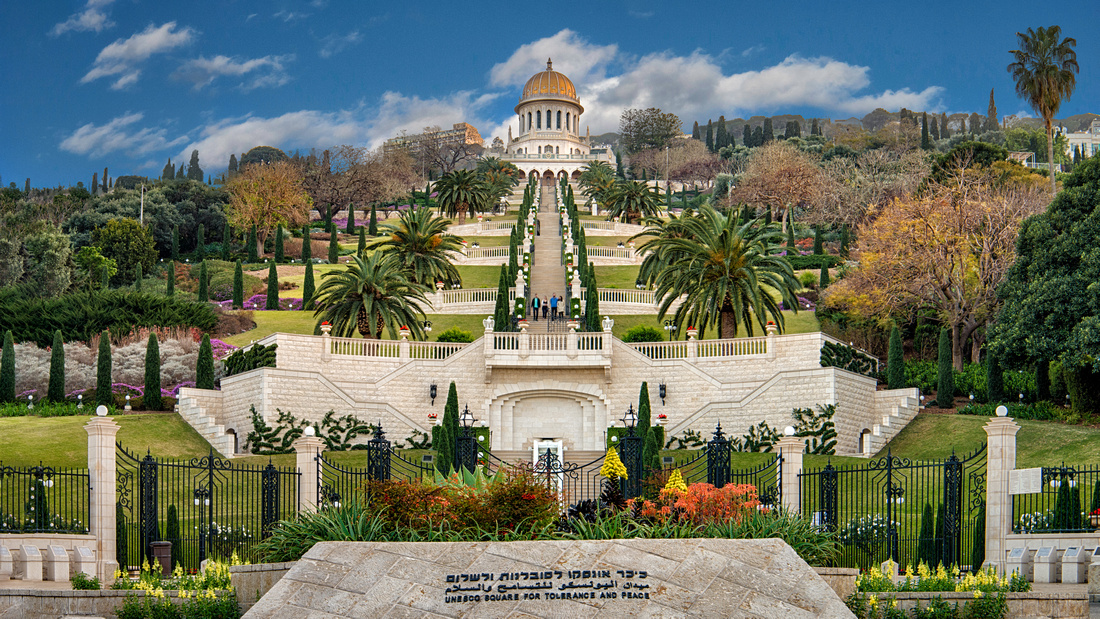 The Bahá'í faith is monotheistic and one of the newest of the world's major religions. It was founded by Bahá'u'lláh in Iran in 1863 and has 7 million followers.  The Bahá'í faith teaches the essential worth of all religions and rejects racism and nationalism.

Bahá'u'lláh declared himself a prophet similar to Jesus and Mohammed.  Bahá'u'lláh’s Bahá'í faith was rejected in his native Iran (Persia) and he was imprisoned in several Ottoman Empire prisons.  He died in a prison in Acre, Palestine (now Israel), 9 miles across the bay from Haifa.

The Bahá'í Hanging Gardens are one of the most picturesque scenes in Israel.  They stretch a half mile up the side of Mt. Carmel, cover 50 acres, and overlook busy downtown Haifa, Israel, the Haifa Bay, and the Mediterranean Sea about 8/10s of a mile away.  They are an oasis in the middle of a chaotic, modern city.

Architect Fariborz Sahba began work in 1987 designing the gardens and overseeing construction. The terraces were opened to the public in June of 2001.

The gardens are linked by a set of stairs flanked by twin streams of running water cascading down the mountainside through the steps and terrace bridges.

The gardens include the Bahá'í World Centre, shrines, and the graves of some members of the Bahá'í holy family.

The photo above is my favorite from this trip to Israel and it was the most difficult image to capture.

I arrived in Haifa near rush-hour and parked at the top of Mt. Carmel.  The walk down to the base of the gardens included a series of wooden steps that were just outside of the gardens and passed through residential neighborhoods.

I set up my tripod in the median between four lanes of traffic jam and shot an HDR series.  Each exposure had to be shot when there was a break in the roundabout traffic and when human traffic in the gardens permitted.  After an hour or so, I got the series for one HDR image I shot of the gardens.

At the end of the day and the end of my shoot, the Bahá'í Hanging Gardens closed and I didn’t get on the property – next time.

There are two photos with different aspect ratios in my gallery.