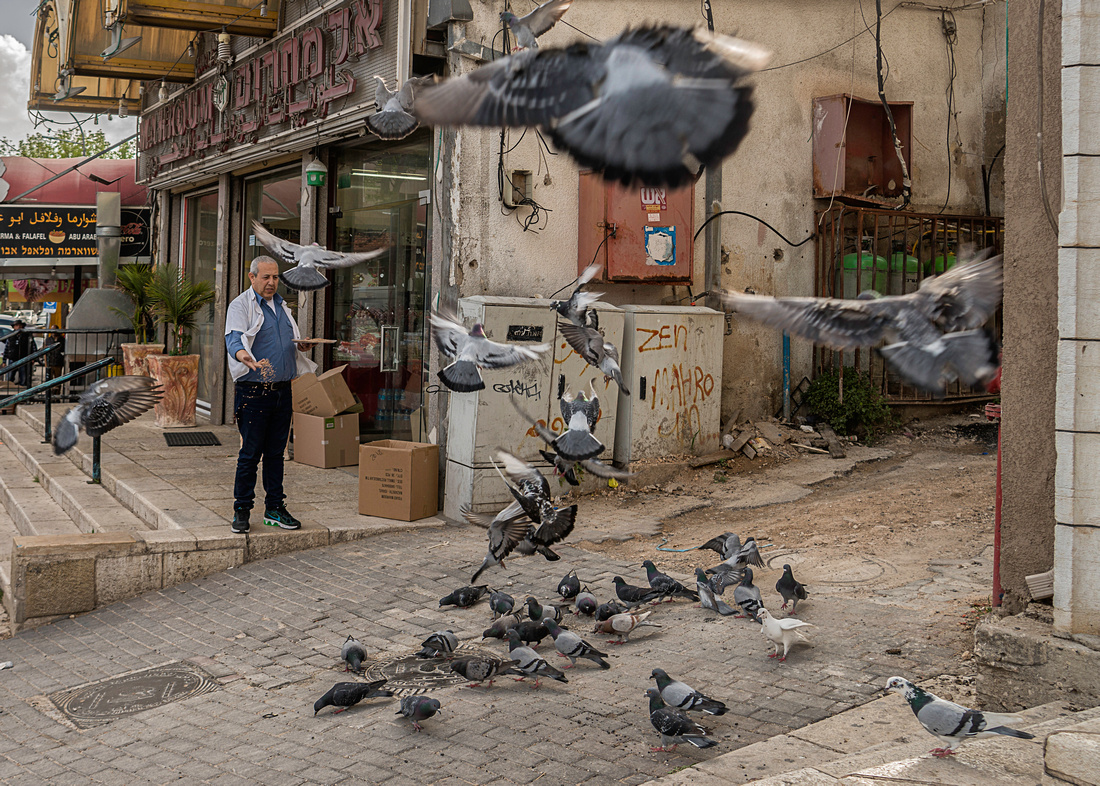 Israel has some of the worst drivers I’ve seen anywhere and Nazareth has the worst drivers I saw in Israel.  I wanted to shoot more photos of the traffic and the drivers in Nazareth but I was too busy trying to save my life and the life of my passenger and parking was very limited.

Traffic was worse than in any major American city and worse than Tokyo; cars thought nothing of being inches away from the sides, front, or back of my rental car; cars pulled into traffic if they could clear a bumper and dared you to hit them; and pedestrians thought nothing of stepping in front of moving traffic.  Almost every car I passed was banged up on all surfaces.  No surprise.

The newer city of Nazareth was on the top of a mesa and was filled with large brick and mortar stores and shoppers that could have been in any large city except that almost all signs were in Arabic.  I passed a group of demonstrators who were on a flatbed truck with bullhorns shouting out their grievance or their cause in Arabic – I had no idea what they were for or against but they were loud and assembled a large sympathetic crowd.

The old city of Nazareth, by contrast, was in a natural bowl that sat much lower than the mesa; you had to drive downhill to get there.  There was one major shrine in the area, the Basilica of the Annunciation, a beautiful Catholic shrine built around the grotto (cave) where the Angel Gabriel told the Virgin Mary she would give birth to the son of God, Jesus.

Old Nazareth was in stark contrast to the new Nazareth at the top of the mesa.  Traffic wasn’t as death-defying; stores were smaller and were run by one person or just a few people, and there was an obvious catering to tourists.  There were no demonstrations.  Food was sold in street-side stores with no front wall.  In this city, 25 miles south of Lebanon, that was 70% Arab, every person I met was as friendly and outgoing as citizens of small-town southern America are known to be.  There were tourists from all over the world speaking many languages but I didn’t see one person I could identify as American.  I guess more Americans than me were warned not to go to Nazareth.  It was their loss.

This blog has a link to photos of Nazareth pigeons.  In the childhood home of Jesus, the scenes in these photos contrasted with the bustling new city of Nazareth on the mesa and with the nearby Christian Catholic shrine.

A shop owner came out of his store for what I assume was a daily feeding of pigeons and the pigeons were waiting.  He threw feed on the brick covered side-street and a large flock of pigeons was happily fed.  Most store signage was in Arabic except for one sign that said Coca-Cola Zero and an English sign advertising shawarma (grilled lamb, turkey, chicken, beef, or other meat) and falafel (chickpeas aka garbanzo beans).  Arabic and English graffiti were on the electrical and phone boxes on the side of the store.  Electrical wiring was very third-world, dangerous looking, and typical of Israel.  The steps to the store and the sidewalk in front of the store were Jerusalem stone.

Pedestrians walked on by the pigeon feeding frenzy.  One grandmother with bright red hair and her grandson paused to watch the scene and the grandson walked into the middle of the pigeons scattering pigeons everywhere at the end of their meal.  This was a scene I didn’t expect to see in the childhood home of Jesus but it seemed a more likable and appropriate scene than the chaotic traffic in the new Nazareth on the mesa.