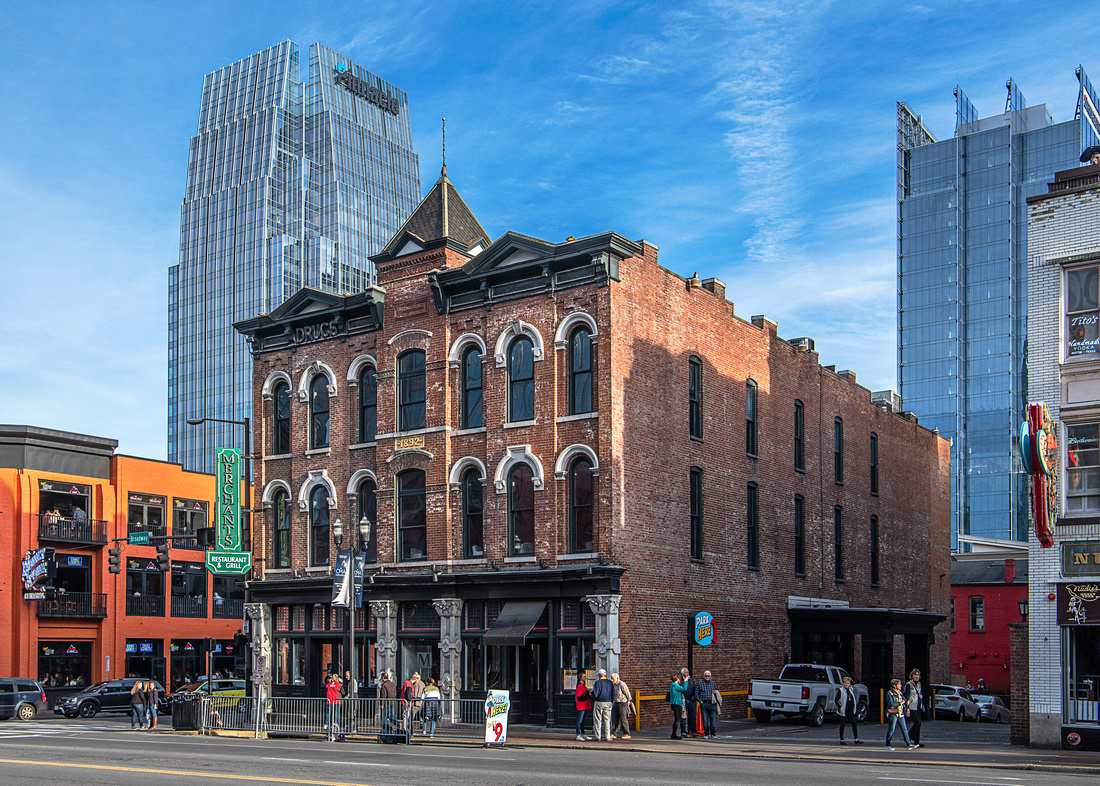 Merchants is a three-story Nashville building built as a pharmacy at the corner of 4th and Broadway in 1872, seven years after the end of the Civil War, but expanded and turned into a hotel with a pharmacy in 1892, the same year the Ryman Auditorium, the longtime home of the Grand Ole Opry, opened less than a block away.

Merchants Hotel was an affordable option for traveling salesmen (merchants) who could stay there for a week at about the same price as a day rate at nearby, well-known, fancy hotels.  Early 20th century rates were 25 cents for a room and 25 cents for a hot meal.

In the early days of the Grand Ole Opry, country music legends Hank Williams, Johnny Cash, Patsy Cline, Roy Acuff, and Dolly Parton stayed at Merchants Hotel when they performed at the Ryman Auditorium which was home to the Grand Ole Opry from 1943-1974 and still hosts the Opry on special occasions. The hotel operated until the 1980’s, when downtown Nashville was in steady decline.

In between Opry spots, entertainers and musicians gravitated to three nearby locations – they would walk out of the backdoor of the Ryman Auditorium, into the alley, enter the backdoor of Tootsie’s Orchid Lounge and drink beer, eat at a greasy spoon restaurant on Broadway called Linebaugh’s, play the pinball machines in Linebaugh’s front window, or play pool in a back room of Merchants Hotel just past the bar and surrounded by destitute, transient roomers and drinkers.

At one time, the downstairs side of Merchants Hotel nearest 4th Ave. was home to a bar and honky-tonk called Deemens Den, named for the young singer, Nancy Dee, who owned the bar.  It was a gathering place for Nashville musicians when they were home off the road. They would go to Deemens Den between Opry spots and sit in.

In the 1980’s, Ed Stolman purchased the Merchants building when it was on the brink of being demolished and, in 1988, Stolman opened Merchants Restaurant, an upscale dining establishment in a less than desirable neighborhood long before Nashville’s boom in tourism and upscale food service.  The restaurant did well for a time but, in 2010, brothers Benjamin and Max Goldberg learned that the famous restaurant from their childhood was, once again, on the brink of closing and demolition.  They bought it and turned Merchants around again.

Today, Merchants Restaurant is going strong in the midst of a Nashville tourist explosion and surrounded by attractions such as the Schermerhorn Symphony Hall, the Country Music Hall of Fame, Music City Center, Nashville’s convention center, the Ryman Auditorium, Bridgestone Arena, the many music clubs on Lower Broadway, and towered over by 21st century skyscrapers like the Pinnacle Building.

There are only three 19th century Nashville buildings that were once hotels and are still standing but Merchants is the only one that has survived in a hotel/restaurant capacity for 146 years.