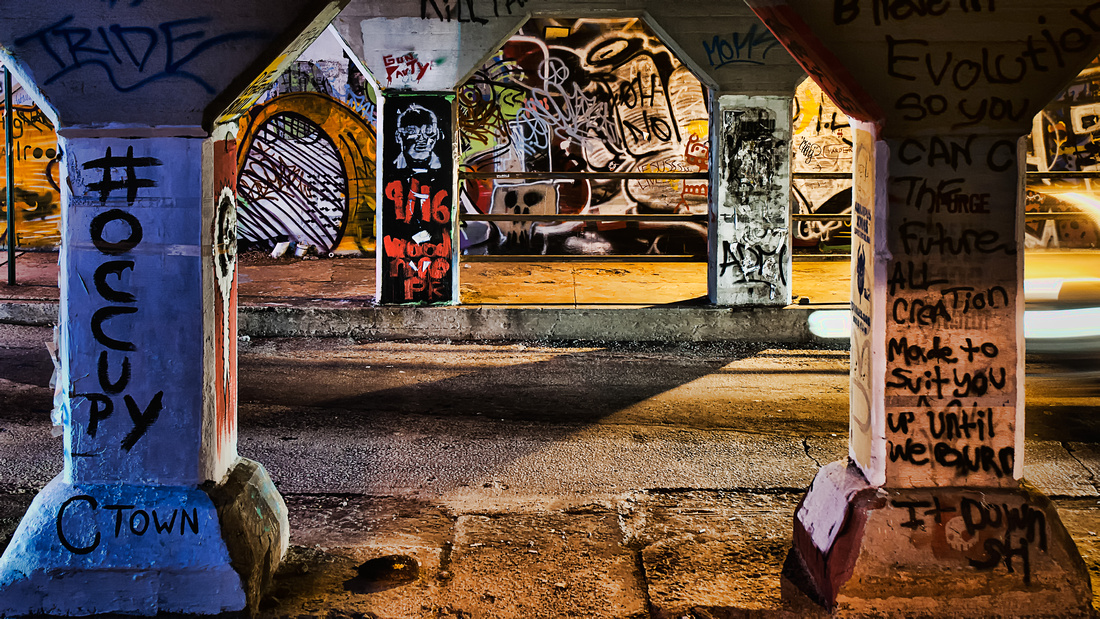 This is a new blog – previously only an email – about a photo gallery I posted in 2012 when I shot photos of the street art (graffiti) at the Krog Street Tunnel in Atlanta.  The tunnel is a railroad underpass that links Cabbagetown and Inman Park.  It is known for the graffiti that covers its walls.  Graffiti also appears on neighborhood walls and buildings.

Cabbagetown was an 1800s mill town on the east side of Atlanta that is now on the National Registry of Historic Places.  The Atlanta Rolling Mill was destroyed after the Battle of Atlanta and, in the post-Reconstruction era of the 1800s, a German Jewish immigrant built a mill on the site of the old Atlanta Rolling Mill by the railroad in Cabbagetown; the railroad brought raw materials and took finished products to the marketplace.  The mill was a rag, paper, and hide business that produced textiles, paper products, and cloth bags for agricultural products.  Their chief product soon became bags for the cotton industry.

The mills hired cheap white labor from the Appalachian area of North Georgia.  Cabbagetown housed its poorly paid labor in shotgun houses on narrow streets.  In recent times, the area has become a magnet for artists, musicians and other bohemian spirits.  Some of the old mill buildings have been converted into the nation’s largest residential loft community – The Fulton Cotton Mill Lofts.

The arrival of the automobile allowed wealthy Atlantans to live in suburbs such as Buckhead, farther north from downtown workplaces. Inman Park mansions were subdivided into apartments and Inman Park became an economically depressed neighborhood of mostly blue-collar white people, elderly couples who couldn't afford to move, and families on disability and welfare.

Today, after decades of gentrification and restoration, Inman Park is a desirable place to live again – a mixture of restored single-owner restored Victorian mansions and tiny mill town shotgun rental houses.  Former industrial areas on the west side of the neighborhood have been redeveloped into mixed-use complexes with artist’s galleries and graffiti covered walls

The Krog Street Tunnel connects these two disparate communities – Cabbagetown and Inman Park.  The tunnel is a railroad underpass that is lower than the surrounding land and floods in heavy rains; I saw a photo of a man rowing a canoe through the flooded tunnel.

The Krog Street Tunnel is covered with ever-changing graffiti.  There are two lanes for traffic and a pedestrian walkway on each side.  Supporting beams separate the two car lanes and the pedestrian walkways.  Rush hour traffic is extremely heavy.  I had to shoot these photos of graffiti in the rare times between rush hour traffic.  A photographer could get run over by passing bicycles but they are courteous enough to give warning grunts and vocalizations.  The light was a strange mixture of daylight toward the ends of the tunnel, car lights and unearthly red tunnel lights.  I used only ambient light.

If you visit the Krog Street Tunnel, the graffiti will be totally changed.  It is always a work in progress.