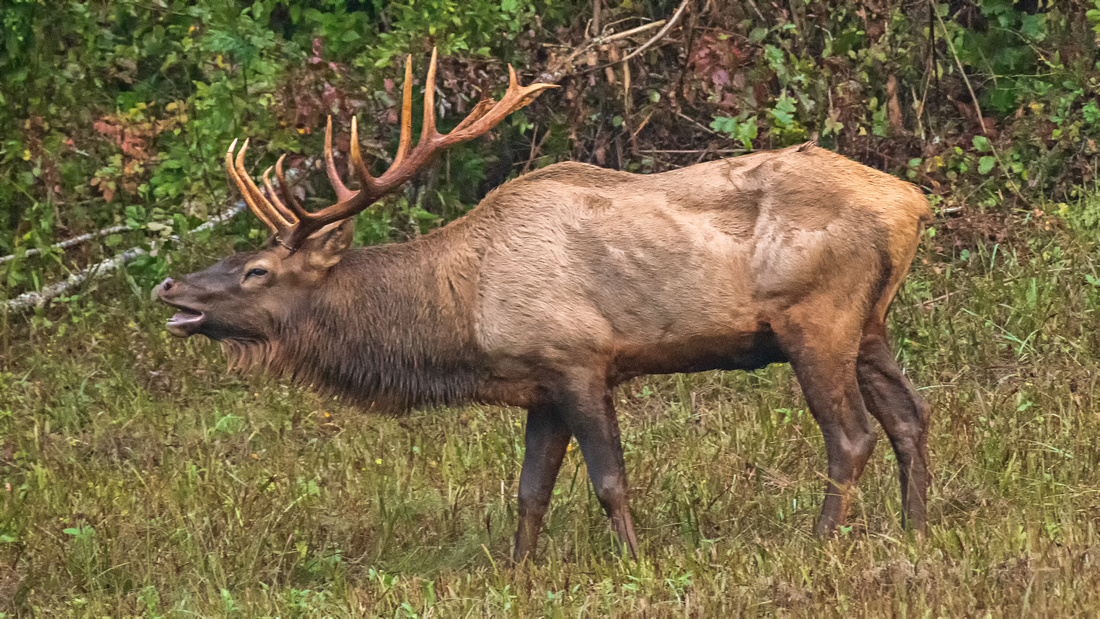 Elk once inhabited the valleys and forests of Cataloochee, NC, near Maggie Valley, in large numbers but were nearly made extinct there due to encroaching civilization and excessive hunting.  The elk were repopulated in Cataloochee in the early 2000s by about 50 elk, mainly imported from Kentucky’s Land Between the Lakes, and the numbers are now about 150.  Almost all elk are tagged with collars but free-roaming and protected from hunters.

I went to Cataloochee at the height of the rut, the elk mating season when bull elk (males) fight by clashing antlers to gain the right to mate with cow elk (females).  In the past, I’ve seen one huge bull elk that had a large number of cows corralled in one area and challenged any bull who approached and ran any cow who tried to escape back into the harem.  Elk threaten each other by curling back their upper lip, grinding their teeth and hissing or by charging with their antlers where their opponents can be injured or killed.

Among North American animals, only walruses and elk have ivory teeth. In walruses these are tusks, but in elk they are similar to their remaining teeth. These ivories, also called buglers or whistlers, are in the upper jaw on each side of the front teeth and are often kept as trophies by elk hunters. In prehistoric times, these ivory teeth were 6 to 8 inches long.  When an elk bares his ivories, it is a sign of aggression.  He uses his antlers and ivories to attack foes.

In the rut, bulls urinate and then roll in the urine to get a urine perfume all over their bodies to attract cows as part of their mating ritual.  How romantic.

I have one video in my gallery that shows a bull urinating and then bugling (bellowing), a high-pitched call to attract cows for mating and to intimidate other bulls.  The pitch is very high and not what I expected to come out of a 700+ pound bull elk.  Urination almost always preceded bugling.

The best time to spot elk, as with most animals, is early morning and late evening and I shot both times. In the middle of the day, the elk disappear into the cooler, shaded forest.

This year, I saw bull elk (adult males), cows (females), calves (baby elk), and spikes (yearling males with short, spiked antlers).  Calves, usually born from May to June, are born spotted and scentless as protection from predators.  When young, they lie motionless in tall grass to remain hidden while the mother cow hunts for food.  On this trip, older calves were running around like unbridled, energetic kids.

I saw no clash of antlers but I included two images from last year in my gallery that show a spike and a yearling elk clashing antlers.

One bull elk had a harem of about 20 cows and no competition from other bulls, even though I saw a few bulls nearby

A couple of years ago, I was at Cataloochee and saw one smaller bull elk confronting a huge bull elk that was guarding his harem.  He also got too close to tourists and seemed to have no fear of anyone or anything.  I thought his actions were a bit crazy, even for a moose.

Later in that same day, after I was gone, that bull confronted a photographer who was sitting on the street with his camera and gently, at that point, butted heads with him.  The photographer didn't run or move or he might have been killed by the crazy elk.  This went on for minutes as another tourist got video of the encounter.  The video became national news and the crazy elk was put down by park rangers before he could injure or kill a tourist.

Elk are in the deer family.  A bull elk can weigh between 700 and 1,000 pounds, stand 5’ from the shoulder, and is more unpredictable during the rut.  Visitors are warned to stay 50 feet from the elk and near their car where they can seek protection, if needed, and warned they can be injured or killed.  I saw many visitors get within 10 feet of bull elk to shoot photos with their cellphones and tablets.  There were no park rangers present.

Last year I was standing with a park ranger looking toward a field of elk when he suddenly yelled, watch out.  An elk I didn’t even see behind us decided to bolt toward the field and ran right between us.  The park ranger said, when they decide to bolt, they don’t care who or what they have to run over.

This year, I had a lens with a maximum focal length of 500mm (700mm equivalent in DX cropped mode) and kept my distance while near my car and ready to take cover.

I watched and shot for hours while the one bull elk with a harem approached cows, any cows, with amorous intentions.  Every single cow walked away, ran away, sat down, or otherwise rejected him.  If we’re looking to that bull elk to repopulate the species, they are doomed.  Just a thought - maybe too much urine perfume?

There is no joy in Mudville tonight; mighty Bull Elk has struck out.