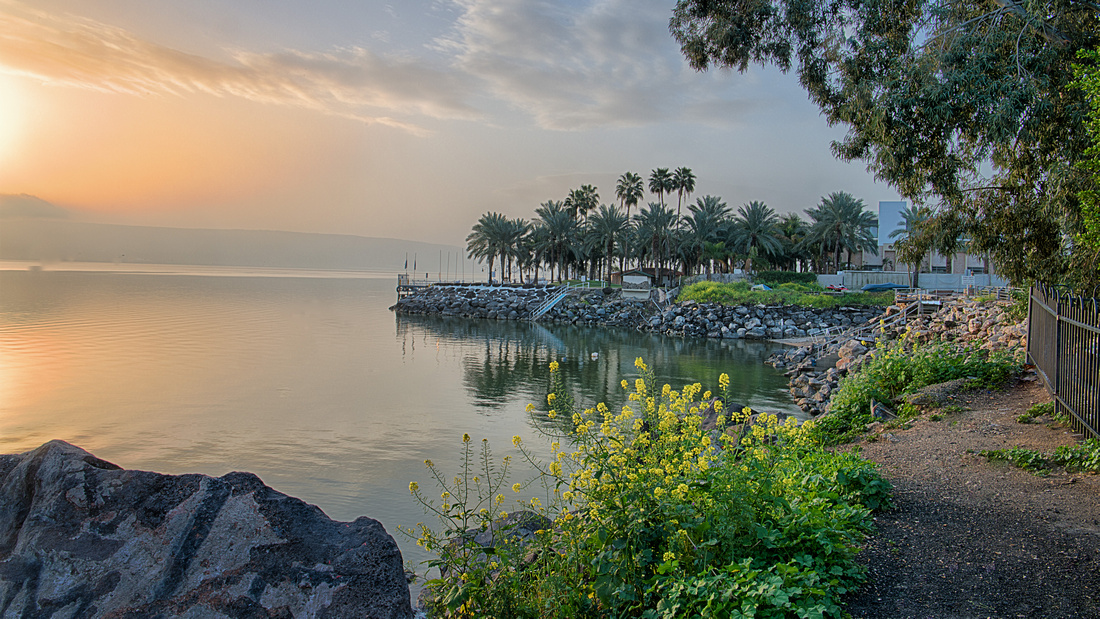 After a few hours’ sleep, we got up at 4 am to drive the 2 hours, 110 miles, from Jerusalem to Tiberias on the Sea of Galilee before sunrise to scout and shoot a sunrise photo.  I found out later that the place I picked for a sunrise photo was Ron Beach, part of the Ron Beach Hotel.  How appropriate.

Tiberias is north and a bit east of Jerusalem but you can’t drive straight to Tiberias or you would be passing through Palestine’s West Bank.  You have to go west of Jerusalem, almost to Tel Aviv, north about 20 miles east of the Mediterranean Sea, through a few toll roads, just north of Nazareth, and finally, east to Tiberias.

Tiberias is the largest city on the Sea of Galilee.  It is on the west side, halfway from the northern and southern shores.  It was named after the 2nd Roman Emperor, Tiberius.  Tiberius, the emperor, and Tiberias, the city, are spelled differently.

Tiberias’ population is mostly Jewish.  It is considered a holy city but tourism, including Christian tourism, spas, and fishing are a big part of the economy.  The lake is low-lying and the surrounding land in Tiberias and much of the area rises from the lake.  The drive into Tiberias is downhill and the land you see on the eastern side of the lake is mostly Syria.

After I got a sunset shot, we went to the northeast side of the Sea of Galilee to Ramot while waiting for the gated community of Capernaum to open.  The greens and yellows were so unusual I took a few photos.  My GPS and map tell me we were in Ramot, Syria.  I didn’t see any border signs and didn’t see many people.

Capernaum, spelled locally as Capharnaum, was a very small fishing village in Jesus’ time on the north shore of the Sea of Galilee with a population of about 1,500 people.  It is about 30 miles northeast of the small, mountainous town of Nazareth, where Jesus was born.

Capernaum is where Jesus first preached, first performed miracles, healed a man who was lowered through the roof, and turned local fishermen into his disciples.  He preached the Sermon of the Beatitudes on the Sermon on the Mount in Tabgha, about a mile away.  The very small town of Capernaum had a very large role in the history of Christianity.

Jesus selected Capernaum as the center of His public ministry in Galilee after he left Nazareth but He also formally cursed the city saying "you will be thrown down to Hades!" because of its lack of belief in him as the Messiah.

Today, Capernaum is owned and maintained by the Franciscans, founded by Frances of Assisi and part of the Catholic Church.  You enter a gate to Capernaum.  A statue of the Apostle Peter is there.  The ruins of the Apostle Peter’s home are there with a large structure for study and research built over it.  There is a church nearby and visitors to Capernaum were singing under the sky.

One thing I can’t forget is the amount of trash along the gated shoreline.  I saw paper plates and plastic forks and all manner of trash.  Some of the trash looked like it had been there for months.  This is a gated location owned and maintained by the Franciscans.  It would take 5 minutes at the end of the day to walk along the shoreline and pick up trash.  Names and initials, in various languages, were carved into the leaves of aloe plants.

The Sea of Galilee is oblong, lyre-shaped, and runs north and south.  One of many names for the lake is thought to be a Hebrew word for lyre.  The lake is about 33 miles in circumference, 13 miles wide, and 8 miles long.  You can stand on the shore and see the shoreline of most of the lake.

The Sea of Galilee is a major source of water in Israel.  Water use has lowered its level and the salt level has increased.  Israel has plans, including desalinization in other areas that will be designed to reverse that trend.

The lake is home to a wide variety of flora and fauna, and yet, the Dead Sea which receives water that exits the southern end of the lake can support no life.

The Sea of Galilee was formed by the African and Arabian plates and is prone to earthquakes and volcanoes as the balsamic rock and large boulders attest.

I was surprised by the large boulders on the northwest shore that made it very difficult to walk along the shoreline.  The lake is low-lying, the lowest freshwater lake in the world, and the winds can be very dangerous.  At one time, 10’ waves washed up on shore at Tiberius and this was on a lake, not a sea.  Windsurfing is popular and a windsurfing rental store was very near Capernaum.

We left Capernaum and went to Tabgha, about a mile away and saw the Church of the Primacy of St. Peter where Jesus reaffirmed Peter as chief among the apostles.  The church contains a projection of limestone rock in front of the present altar which is venerated as a Mensa Christi, table of Christ.  According to tradition, this is the spot where Jesus is said to have laid out a breakfast of bread and fish for the Apostles and where He told Peter to "feed my sheep" after the miraculous catch, the third time He appeared to them after His resurrection.

Many people asked me, after my 2008 trip, if I felt a spiritual connection to the Western Wall or other Israeli landmarks.  Not as they expected but one event that happened at the Sea of Galilee stands out above the rest.

As I mentioned, I was surprised that the Sea of Galilee was very windy, so much so that windsurfing is a popular sport.  The wind blew so hard, it blew dust into my eyes.  You can see in my photos that the water surface was very choppy.  Two windsurfers and a tourist boat, probably from Tiberius, were on the lake.  Jesus boats, designed to look like they were made in the time of Jesus, carried tourists from Tiberias on Sea of Galilee tours.

Big rocks or small boulders were all along the west side of the lake and the terrain was not easy to walk.  We were north of Tiberius, the largest town on the lake.  I could see Capernaum on the northern shore and I walked toward it.

I passed a man who was sitting on one of the boulders fishing.  A photo of him is in my gallery because you can’t see his face.  I asked if he was catching any fish.  He put his fingers to his lips, shook his head no, and said speak in a raspy voice.  I was being told not to speak and scare the fish away – a warning that was common from fishermen.

We walked on up toward Capernaum.  One small building on the way had a little activity.  I went in and their main business seemed to be renting windsurfing boards.  They also sold soft drinks and snacks.

When we left the area, we chose to walk back to the car on a road very close to the shore because the shore was so rugged.

When we approached an old car along the way, I saw a man and a woman sitting beside it.  As I had seen in other places in Israel, they had what looked like a Bunsen burner with a large tin can on it.  They were cooking fish.

I recognized the man as the fisherman I passed on the way to Capernaum.  He sort of grunted and motioned for us to sit down and join them and I realized he couldn’t talk.  When I passed him and he shook his head no, touched his lips, and said speak, he wasn’t telling me not to speak; he was telling me he couldn’t speak.  I’m not even sure if he spoke English or if the word he said on the shore in a raspy voice was speak.

This man and his wife probably lived in the old car they were sitting next to.  Their clothes were shabby and dirty and their hands and faces were dirty.  He wasn’t fishing for sport; he was fishing to feed his wife and himself.  He had nothing but he was offering to share what he had with us.

That was my religious moment in Israel more than the Wailing Wall or the places that are said to be where biblical events happened.  I'm still touched by people over places.

We were going to Akko (Acre) on the Mediterranean, where Romans invaded what is now Israel and where they built a fort and where there was a lighthouse.  We wanted to be there before sundown so I thanked the man and his wife and we left.  I still regret that we didn’t take a few minutes to sit down and visit with them.

We didn’t join the fisherman and his wife but this was my favorite story from my 2008 trip to Israel.