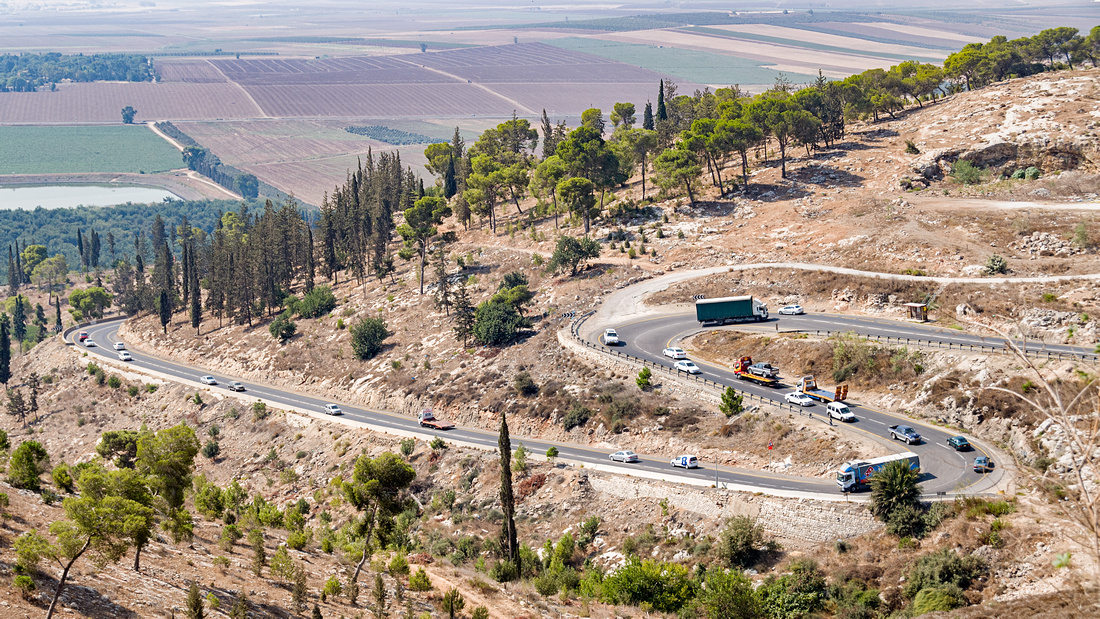 2008, Nazareth, The Road Up to Nazareth looking south to the Jezreel Valley

Before my first trip to Israel in 2008, several friends who were very familiar with Israel told me the city wasn’t safe for Americans.

One night, we were resting in our favorite spot, a hookah bar – drinking coke but not smoking hookah – in the Armenian section of the Old City of Jerusalem just inside the Jaffa Gate.  A couple of young men wanted someone to take their photo.  They had a barely adequate camera so I took a photo with my camera and emailed it to them that night.

The two young men asked questions.  Where were we from?  How long had we been in Israel?  Where had we been?  They asked if we were going to Nazareth.  I told them it was not safe for Americans.

What?  Who told you that?  We’re from Nazareth. People visit Nazareth from all over the world.  You must go to Nazareth.  We never saw the two young men again but the next day we went to Nazareth.

Nazareth is the capital and largest city in the northern district of Israel.  It is the largest Arab city in Israel and the population is 70% Arab.  Nazareth is about 15 miles west of the southern tip of the Sea of Galilee and about 26 miles a little southeast of Haifa.  It is about 90 miles north of Jerusalem.

When you approach Nazareth from the Jezreel Valley, to the south, you see a mountain or mesa rising out of flatter land; Nazareth was settled on the mesa.  The rise in elevation is so steep the road has to snake up the mountain rather than go in a straight line.  When you get to the top of the mesa, the Old City of Nazareth was settled in a natural bowl that is a lower level than the surrounding land of the mesa.

Nazareth was the childhood home of Jesus.  In the time of Jesus, the population was about 400.  The heathen residents of Nazareth tried but failed to push Jesus to his death from a cliff at Mount Precipice.  A 100-foot statue of Jesus has been proposed for Mount Precipice in commemoration of that event.

Today, this childhood home of Jesus is full of mosques and minarets for the 70% Arab and Muslim population.  Jews and Christians are in the minority.

I was warned by Americans and Israelis that Israel has bad traffic and bad drivers.  I drove all over Israel and I think Nazareth is the biggest danger for drivers.  Traffic is dense, especially in the new city, and drivers are aggressive.  They will pull in front of you if they can clear your bumper.  Pedestrians will also walk in front of cars.  Traffic was bad in 2008 but it was much worse in 2017.

In some areas, storefronts and signs were mainly in Arabic.  In areas where there were more tourists, more signs were also in English and Hebrew.

The streets were full of shoppers, tourists, shop owners, and students.

There were many streetside fruit stands where you could buy oranges, grapefruit, grapes, bananas, melons, or pomegranates.  My favorite was a mixture of fresh squeezed orange juice and pomegranate juice.

In many places, you could buy bread you watched being made that looked like small pancakes.  It didn’t look like the bread you dip into hummus in a typical Mediterranean meal: it looked more like bread you’d eat by itself or with other food rolled up inside.

Israelis like unpackaged food.  There were unpackaged spices, nuts, seeds, candy, etc. everywhere.  What was most striking were the large burlap bags full of spices that were on the curb.  I wondered how the health department could approve food sitting on the curb that was open to rain, mice, and other scavengers.  Customers filled plastic bags with as much or as little of each food as they wanted.  Things might be changing because I saw fewer burlap bags full of food sitting curbside on this trip.

I saw bad-for-you food bars with fried food, sausage, and other meat but they were less plentiful.  Even those places had fresh fruits and vegetables and hummus.

There are American fast food restaurants all over Israel, including Nazareth - Pizza Hut, McDonald's, etc.  McDonald's employees 4,000 people in Israel, mainly teenagers.  It seems a shame to go to Israel and eat at McDonald's but some people do.

I didn’t see many smokers in Israel but I did see one large display of cigarettes for sale.  There were no customers.

Luffas and whisks were displayed on a post on the curb.

Nazareth is impoverished but has many high-tech software companies.  It is sometimes called the Arabic Silicon Valley.

I saw a store owner feeding probably 100 pigeons that are happy, regular customers.  A couple of pedestrians watched or joined in.

Today, in the Hula Valley, about 15 miles north of the Sea of Galilee, an aphid from Central America is killing the cacti and sabra fruit.  The aphid invasion is limited to the Hula Valley, for now, but the Central American aphid has no predators in Israel and the fear is that the problem will spread to all the cacti and sabra fruit in Israel.  Pesticides are a temporary fix but introducing the aphid’s natural predators may have unintended consequences.  A reminder that one lifeform may be dependent on another or made extinct by another.