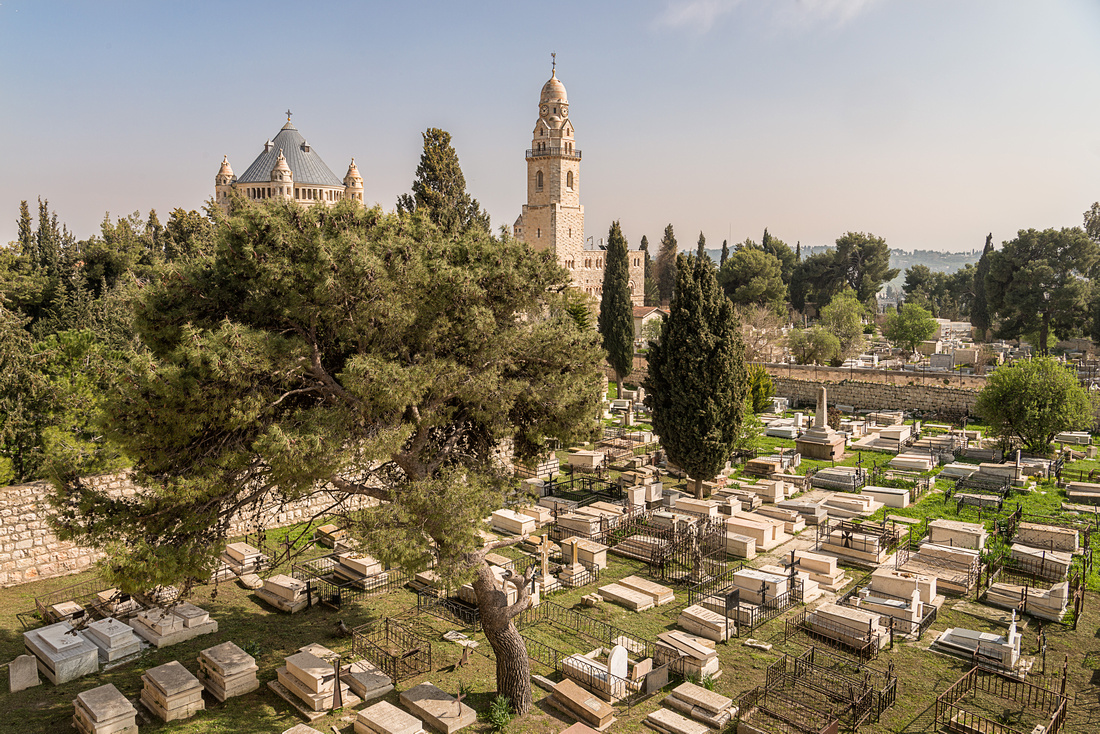 The Bethlehem tour director told us we would be picked up at the National Hotel – picked up in a truck and they were late – and dropped off at the end of the tour at the Old City’s most popular gate, the Jaffa Gate.  That would have been nice.  We were actually dropped off about a mile from the Jaffa Gate with no instructions about where the gate was.  Not so much as, it’s that way.  Much of the distance was uphill.  Once they have your money and they’re done with you…they have your money and they’re done with you.

Just inside the Jaffa Gate, you can pay to climb stairs and walk the ramparts.  Walled cities and castles have ramparts for a reason.  Ramparts can see attacks coming, look down on attackers, and shoot arrows through slots in the wall with little fear of an arrow making it through the slot to them.  The ramparts are at the top of the wall and circle the Old City.

The Old City has two ramparts, north and south.  The north rampart, the longest, was closed for repair but the south rampart was open and promised great views of the Old City.  Other than a couple of great views, I saw a side of the Old City that was unflattering.  I saw backyards filled with trash.  It’s shocking that Israel, especially the Old City, had so much trash and that it didn’t seem to bother anyone.  It would take 5 minutes a week to pick up some of this trash that looked like it had been there for months.

The southern ramparts were the shortest walk, about 40 minutes, longer when carrying a 25-pound camera bag up and down steps making the walk more strenuous.  Ramparts walks, the sign says, are too difficult to be recommended for everyone.

Today, there are guidelines for how high steps should be and how long the vertical run should be.  The general rule in the US is 7-11 (a 7” rise and 11” run).  More exactly, no more than 7 ¾” for the riser (vertical) and a minimum of 10” for the tread (horizontal part of the step).

These common-sense standards were obviously standardized after the ramparts were built.  Many ramparts steps were a foot higher or more making the walk much more difficult.

I got many shots of the Abbey of the Dormition, also called the Basilica of Assumption (dormition), just outside the gate on Mount Zion near David’s tomb and the Zion Gate, very near the Last Supper.  Photoshop removed trash just inside the gate as it did in many Israeli photos.

The Benedictine Abbey is the site where the Virgin Mary fell into a deep sleep – where she died.  Dormition, in the Orthodox Church, refers to the death, or end of life, of the Virgin Mary.  Orthodoxy, Catholicism, and scripture often use the euphemism dormition instead of death.

The site of the Abbey was worth the ramparts walk.  It has a bell tower and is surrounded by an old cemetery.  If a cemetery can be beautiful, it was beautiful.

Out of respect for David’s tomb and the Last Supper, the Abbey’s bell tower was built where it wouldn’t cast a shadow on those sites, even though that made the bell tower not directly accessible from the Abbey.

The Dormition Abbey, along with other Christian sites, has been the target of occasional vandalism as a form of price tag attack by extremist Israeli youths.  Price tag attacks, aka Mutual Responsibility, are acts of vandalism by Israeli youths aimed at Jewish fundamentalist settler youths, the Palestinian population, Christians, left-wing Israeli Jews, Arab–Israelis, and the Israeli security forces.

It’s easy to forget that people live in the Old City.  This gallery has one of many photos of Jerusalem rooftops.  Clothes are often hung up to dry.  It’s probably difficult to retrofit these old buildings for washers and dryers.  It’s enough that they can have electricity, phones, and internet.

Satellite receivers and shortwave receivers are also on rooftops along with wiring that looks like spaghetti.

I saw what looks like oil drums, usually black, on rooftops all over the Old City, Jerusalem, Palestine, and Jordan.  I asked about them and many people said they were indeed oil drums.  They had no answer when I asked why and how they were used.

The Dood Shemesh was invented by Dr. Harry Zvi Tabor, an English-born Jew who died in Israel in 2015.  Tabor’s Dood, invented in 1955, used Israel’s Mediterranean sun to heat water on rooftops.  It was most often painted black, a color that produced hotter water.

The Dood Shemesh has saved the Israeli economy tens of billions of shekels in electricity costs, as well as significantly cutting air pollution.  It can be seen on hundreds of thousands of home and business rooftops in Israel, Palestine, Jordan, and other middle east countries.  You’ll see more Dood Shemesh photos in my future Israeli galleries.  They were everywhere.

When we exited the southern ramparts near the Western Wall, we were exhausted from climbing up and down steps.  A taxi driver said he would take us to the bottom of the hill.  We said we were going to the Western Wall and he said it was closed.  It is open 24 hours a day and never closes.

We told the driver no but he kept insisting we ride in his taxi.  We only wanted to go to the bottom of the hill to the Western Wall.  My tired friend finally agreed to a taxi ride down the hill.

The taxi driver tried to “chat us up” and become our best friend.  All Holy Land hucksters do that.  He said he’d take us to the home of the shortest man in the Bible.  Research says he must have been talking about Zacchaeus.  Sorry, but I could care less.  We said we didn’t want to go but he said he was taking us there anyway.  Not far.

Holy Land hucksters will not take no for an answer.  Whether they’re trying to get you in their taxi or in their store, selling you something you don’t want, selling rides on camels, selling postcards, etc.  One huckster was trying to sell me something and kept selling after I said no emphatically 6 or 8 times.

The taxi driver drove us toward Jericho, Palestine 15 miles away in the West Bank heading toward the north end of the Dead Sea.  I objected and he said, not far.  15 miles is not the bottom of the hill.

I was unhappy about traveling many miles to a destination I didn’t want to go to and unhappy about being an American in the West Bank of Palestine.

Kenny felt very uncomfortable and the buddy-buddy conversation stopped.  He told the driver he was uncomfortable and to turn the taxi around.  The driver refused until 3 or 4 demands and an escalating unhappiness.  By the time we got to the National Hotel, the taxi fare was about $100.  Pretty good turning a ride down the hill that we didn’t want to take into a $100 taxi fare.

The last photo in this gallery was taken outside the Old City walls but on the same day.  It was taken at Observation Mountain on Mount Scopus.  Mount Scopus has one of the best views overlooking the Old City but, sadly, I was turned the wrong way to see it.  The photo I got was looking into the northern Jerusalem valley – still impressive.  The Old City was south of this location.

In times when Jews were not allowed to enter the Old City, they went to Mount Scopus to see it.  It is part of a ridge that includes the Mount of Olives.

The Hebrew University of Jerusalem was built on Mount Scopus so it wouldn’t conflict with Christian locations on the Mount of Olives.  Other universities, hospitals, government buildings, cemeteries, and a botanical garden are also on Mount Scopus.