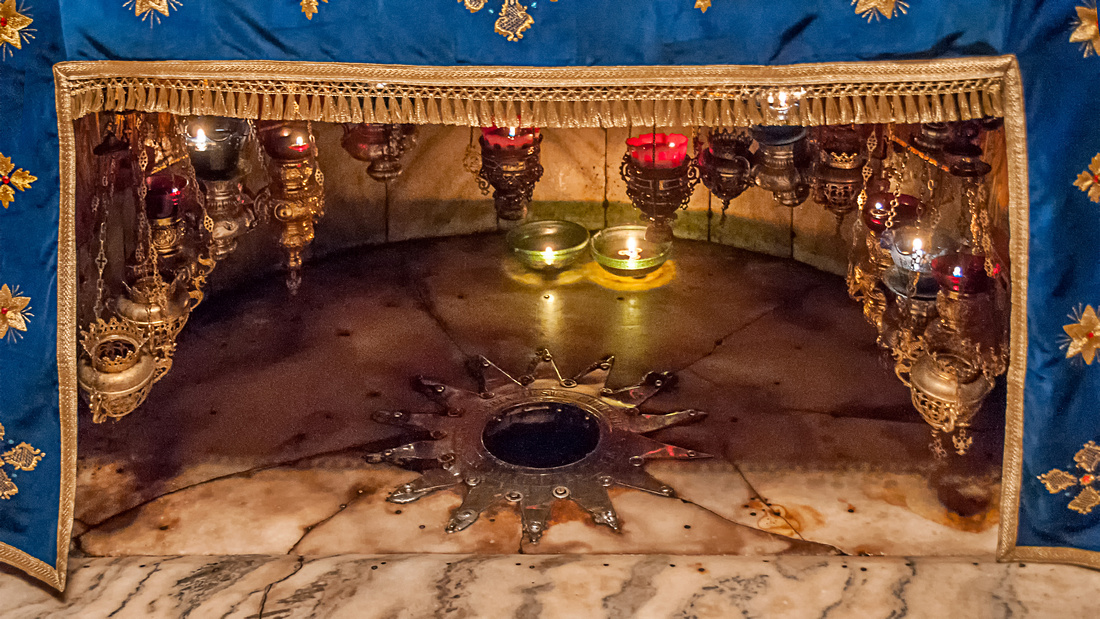 2008, Bethlehem, Church of the Nativity, Location where Jesus was born

Bethlehem is in Palestine, not in Israel.  You can’t just drive the 5 miles from Jerusalem to Bethlehem because there is a border crossing; Bethlehem is on the West Bank of another country – Palestine.

Most people go to Bethlehem as part of a tour.  An Israeli bus with an Israeli tour guide, usually part of a religious tour, picks you up and drives you across the border to Palestine.  In our case, the pickup was a truck that backed down the one-way street to the National Hotel entrance, picked us up, and delivered us to a bus.  We were dropped off at the end of the tour, not near enough to the promised Jaffa Gate.

The first time I took the trip to Bethlehem, we stopped in a remote location in Palestine that looked like a murder scene in a TV movie.  No homes or buildings were nearby.  Trash was everywhere.  Large chunks of concrete were covered with Arabic graffiti.  The wall between Israel and Palestine was nearby.  There was no traffic.

Another bus came to that location and our 30 or so people moved from the Israeli bus to the Palestinian bus.  A Palestinian, Christian tour guide took us to Bethlehem and to the Church of the Nativity where Jesus is said to have been born.  You’ll hear the phrase “said to have” a lot in the Holy Land.  The locations where biblical events took place were determined more than 300 years after the time of Jesus by people from another country.  Some locations change throughout the years.  Some events have more than one designated location.

Bethlehem is a tourist city that attracts a lot of English speaking people so many buildings have signs in Arabic and English.  Western influence is everywhere – in a billboard advertising the Arab Idol TV show, in t-shirts, in English logos and slogans, and in western stores or copies of western stores.  Christian crosses are also prominent.

I wanted to sneak a photo of a young Palestinian Policeman with an assault rifle sitting in a chair in Bethlehem.  I was far enough away to get a secret photo but he heard or saw me take the photo.  I thought I might get a negative reaction but he smiled and waved at me.

Constantine the Great was a Roman Emperor from 306 to 337 AD.  Constantine was the son of Flavius Valerius Constantius, a Roman Army officer, and his consort, Constantine’s mother, Helena.

Constantine converted to Christianity, the first Roman emperor to do so, ended the widespread persecution of Christians and legalized Christianity in Italy and Roman lands.  Constantine was a powerful Roman Emperor.  Constantinople, now Istanbul, was named after him and the Church of the Holy Sepulchre was built on his orders.

In 313 AD, his mother, St. Helena, also converted to Christianity, traveled to the Holy Land with Roman financial backing, to locate holy sites by consulting with local Christians, religious writings, and local traditions.

In Sunday School, long ago, images showed Jesus being born in an above-ground barn surrounded by lots of farm animals.  But the place in the Church of the Nativity where Jesus is said to have been born is an underground grotto or cave with little room for farm animals.

The exact spot where Jesus is said to have been born looks more like a fireplace and is marked with a 14-point silver star which was stolen for a time in 1847 leading directly to French involvement in the Crimean War against Russia.  The silver star's 14 points represent the 14 stations of the cross and it is engraved with the words, Hic De Virgine Maria Jesus Christus Natus Est-1717 (Here Jesus Christ was born to the Virgin Mary, 1717).  The fabric around the location changes but the 14-point metal star remains the same.

A Greek Orthodox church was built directly over where Jesus was born.  You have to go down steps into a very small room to see the grotto or cave.

The Church of the Nativity was originally built by order of Constantine the Great and his mother, Helena, in 327 AD over the grotto or cave where Jesus was said to have been born.  It was destroyed by fire in the Samaritan revolts in 339 AD and rebuilt in 565 AD.

The Church of the Nativity is administered jointly today by Greek Orthodox, Roman Catholic, Armenian Apostolic, and Syriac Orthodox church authorities. All four maintain monastic communities on the site and there have been repeated brawls among monk trainees over quiet respect for others' prayers, hymns, and the division of floor space for cleaning duties.  The Palestinian police have been called at times to restore peace.

The Church of the Nativity sits directly above the grotto or cave where Jesus was born.  I included a favorite photo from 2008 of a Greek Orthodox priest studying directly over the grotto.

The Church of the Nativity looks medieval and forbidding.  The colors and lighting are dark.  It is cluttered with what I call ticky-tacky – metal chandeliers, tapestry, intricately engraved metalwork, incense, candles, icons, the faithful’s beads and relics hanging from icons, hanging incense burners and candle holders, 7-point metal stars similar to the 14-point metal star on Jesus’ birthplace, a wooden poor box decorated with Hebrew writing and a painting, hanging globes, and robed priests or monks.  Ticky-tacky.

The building has endured a lot.  There was a fire and a siege and, of course, time.  I get the feeling that money is short and restoration will be slow.

From the first floor of the Church of the Nativity, you have to walk down steep, narrow steps to the grotto or cave where Jesus was born.  The room can accommodate maybe 10 or 15 people comfortably, 30 or 40 uncomfortably.  On this trip, I never made it down the steps but I put a couple of photos in my gallery from 2008.  Every time I thought I might have a chance to get in line to go down the steps, I saw 100 more people come in the front door.  I was a wide profile with camera and camera backpack.

There are two big differences in the days, 9 years apart, that I was in the church.  There were more people on this trip and everyone had a cellphone, selfie stick, headphones, etc. or all of the above.  You could barely see the scene for LCDs.  I got the feeling everyone was posting to Facebook at the same time.  I talked to one Filipino lady with a selfie stick.  I was close enough to her to see the selfies she was shooting.  80% or 90% of the image was of her and the rest was the scene.  The scene was unrecognizable.

You could buy incense or candles to burn near the steps that go down to the grotto or cave where Jesus was born.  A short time after I was there in 2008, I saw news photos of the Beatles’ Paul McCartney lighting incense there.

The Church of St. Catherine was built in 1347 under the auspices of the Catholic Church and has been remodeled several times.  It displays beautiful, more modern art.  It is well designed, well built, and well maintained.  Many people say it is the direct opposite of the Church of the Nativity.  For better or worse, they are right.

On the way back to the checkpoint, a densely packed Israeli city on the West Bank was pointed out.  It wasn’t there on my last trip.  In spite of world and US condemnation, Israel continues to build settlements on land recognized as Palestinian land in the West Bank.  Yes, I’ve heard arguments on both sides.  I only know that Israeli West Bank settlements are a major point of disagreement between Israel, Palestine, and the rest of the world.

There is an Israeli fence that separates Israel and Palestine.  One of our bus riders asked the driver to make a stop there.  The famous British graffiti artist, Banksy, covered a portion of the wall with his graffiti.  It is a world-famous place I’ve heard about on the news.  The driver gave us one minute to shoot there and a tour bus was blocking much of the area.

Banksy is also involved in a nearby hotel.  Each room is decorated with his graffiti.

Banksy’s identity, name, photo, etc. are unknown.  It is speculated that Banksy might be an individual, a man or woman, or a group of undetermined size.  Banksy is a graffiti artist, political activist, and film director.  Banksy’s satirical street art and subversive epigrams combine dark humor with graffiti executed in a distinctive stenciling technique.