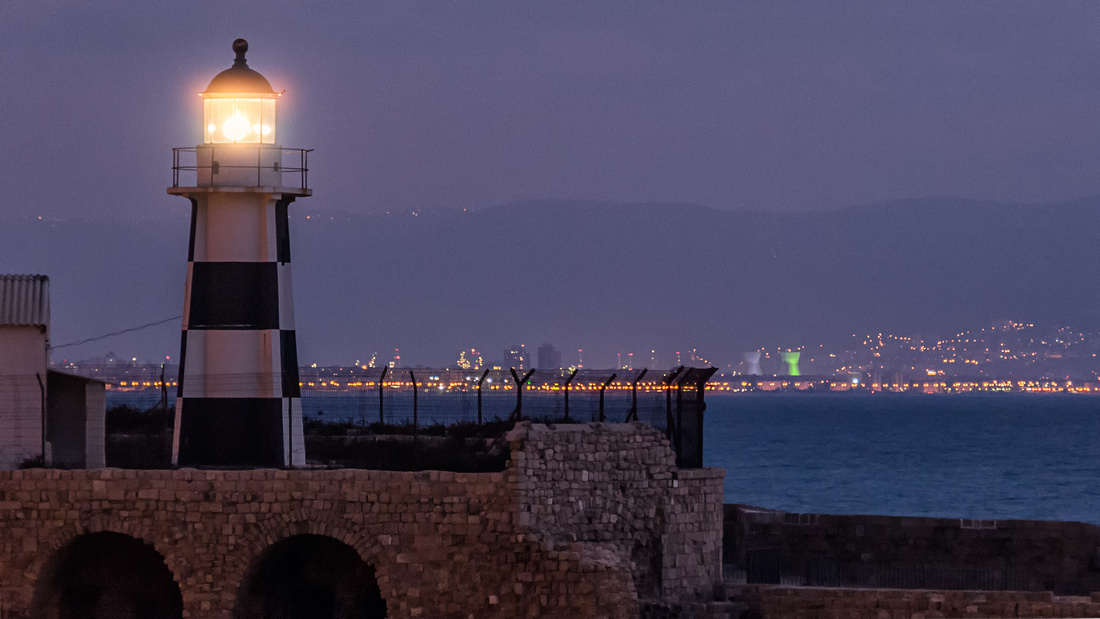 Akko (aka Acre) is on the northern bay of Haifa and the population is 95% Arab but includes Jews, Muslims, Christians, and Baha’i.  It is one of the holiest cities of the Baha’i faith and attracts many Baha’i visitors.  It is one of the oldest cities on earth, continuously inhabited for over 4,000 years, since the bronze age.

The name Akko (Acre) comes from a Canaanite word that means border and probably refers to the city being on the northernmost Israeli border.

Akko has a natural Mediterranean port and is steeped in medieval Crusader history.  It was a major point of entry for commerce and when the Crusaders invaded what is now Israel.  There is a long list of people and countries who conquered and occupied Akko.

The Crusades began in 1,095 AD and Roman Crusaders built a fort along the shoreline of Akko.  The Citadel (a prison) was built over the fort by the Ottoman Empire and was used the 1930s and 1940s as a prison to house Jewish and Arab prisoners.  There was a prison break in 1947 and 214 Arab prisoners and a few others escaped.  There is a monument near the Citadel to those prisoners.

The Akko Light or Acre Light is an active 33’ black and white, concrete lighthouse in Haifa Bay in the southwest corner of the city’s ancient walls.  It was first built in 1864 at this location and the current lighthouse was built in 1912.  It is closed to the public but stairs go from the lighthouse base down to the sea.

The fort stretches along the coast to the Akko lighthouse.  We walked a mile or two by the fort to the lighthouse and I got a few photos.  I shot to the south and you can see Haifa on the other side of the Haifa Bay.  You’ll see two structures toward the right side in Haifa, one lit in green.  Those two structures are nuclear plants.

It was a long walk from where we parked, past the fort at sunset, and to the lighthouse where I got my photo, but going back was a different matter.  We had to walk past the fort after dark.  From the seashore, there is the fort, then a street, a green area, and then housing that reminded me of NYC.  The apartments were several stories high, looked like they had been there for a long time and might not have air conditioning, and they all had fire escapes where people were just hanging out.

In the green area between the apartments and the street, many people were cooking with Bunsen burners, playing games, talking, etc.  And…Akko is 95% Arab.  I told Kenny not to look too American, as if we had that control, and not to speak unless he had to, and then, to speak softly so not many would hear him.

Kenny was trying to quit smoking but not doing so well.  He had a cigarette but no light.  We passed a low fence that had a Bunsen burner that was still lit.  As Kenny was leaning down to light his cigarette, he looked at the crowd and shouted, in his most country, American, Lexington, drawl...I’m just going to light my cigarette.

A young Arab who was probably 18 years old jumped up immediately and ran toward us with something shiny in his hand.  I thought I was about to bleed and/or die - a knife, a gun - in a 95% Arab city.

The young man got within feet of us and pulled the shiny object up.  It was a cigarette lighter and he was offering to light Kenny’s cigarette.  After the cigarette was lit, he held the lighter in the palms of his hands and bowed as he offered it to Kenny as if it was a sword or a valuable item.  I don’t think he spoke a word of English.  At first, Kenny said no but then he accepted the lighter and thanked the young man.

Another memory of people from different cultures who speak different languages and have different religions sharing a moment of kindness.  There were many such moments in Israel.