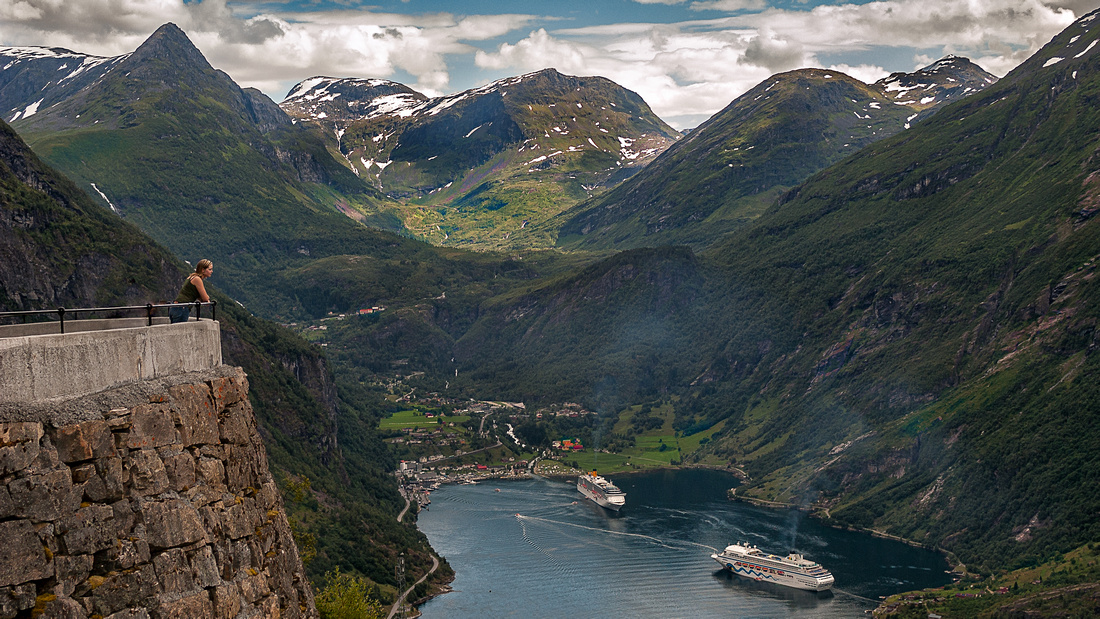 Here’s another gallery of photos from all over Norway in addition to my blog about the Heddal Stave Church.  This blog explains some of the photos you’ll see in the gallery.  There is a link to the photo gallery at the end of this blog.

The first photos in this gallery were taken in Lofoton, an archipelago on the Norwegian Sea in the far northwest of Norway.  I traveled to Lofoton with my friend Arne Benoni who was playing a show there.  Lofoton is way above the Arctic Circle, about 100 miles northeast of Iceland, but the climate is temperate because of the warm Gulf Stream waters.

The famous Moskstraumen (Malstrøm) system of tidal eddies is located in western Lofoten and is the root of the term maelstrom which means a powerful whirlpool in the sea or in a river.

Lofoton is home to Norway’s best cod fisheries.  Cod migrate south from the Barents Sea to spawn in Lofoton.

Circular structures in the water just offshore are salmon hatcheries.  What looks like wooden outdoor clotheslines are for salmon drying and curing.  Salmon are butterflied and hung over the wood lines to dry and cure in the sun.

And Lofoton is also famous for its midnight sun.  For much of the year, the sun doesn’t dip below the horizon; at other times, it dips just below the horizon only to reappear minutes later.  At midnight, I could have walked out in a field and read a newspaper in the midnight sun…as long as it was an English newspaper.  At various times during my stay, I saw children playing in their yard at midnight; the sky looked like daytime.

Some of the first images in my Norway gallery were taken at midnight in Lofoton.  It not only didn’t get dark, the sky and its reflection on the water became one, giving the scene a surreal look.

On my first day in Lofoton, our hostess asked if I’d like to take a morning hike up the Ladies’ Mountain Trail.  I was hoping for a hike that was a bit more challenging but said yes.

I set out with a DSLR and a 25-pound camera backpack and I was wearing street shoes.  The hostess and I both used ski poles for balance.  I found out later how important that was.

The Ladies’ Mountain Trail turned out to be quite a challenge.  Although there were no actual steps, the next place I could place my foot was often 2 to 3 feet above where I was standing.

In addition to the huge steps that weren’t steps, I found wherever I placed my foot was one of three surfaces: solid land, a mossy bog that slid as soon as I put my foot down, and volcanic basalt.  I fell many times while my hostess looked back and asked if I needed help.  Real men don’t ask for help.

At the top of the mountain, there was what looked like a Mason Jar with a small book and a pen inside.  We opened the jar, got the book out, and I signed my name to prove I had been there.

I looked down on the fishing village where I was staying, tired but proud that I made it up the Ladies’ Mountain Trail.

Somewhere at the top of the mountain, we shooed buzzards away from a sheep that had been reduced to bones.  Time to keep moving so the buzzards wouldn’t think I was their next meal.

I thought the hike down the mountain would be easy.  Wrong.  It was almost a bigger struggle than going up the mountain.  For the entire hike down, my toes were pushed painfully to the front of my street shoes.

I had a Norwegian breakfast after the hike that consisted of cheese slices, berries, thawed butter, caviar in what looked like a toothpaste tube, shrimp salad, chicken salad, Italian salad, bread, and coffee.  You’d be surprised how good cheese slices, berries, thawed butter, Italian salad, bread, and coffee taste when you’re a vegetarian who is exhausted from hiking the Ladies’ Mountain Trail.

When you get out of the big cities like Oslo, you see how connected most Norwegians are to the sea.  There are small fishing villages everywhere.  There are large and small pleasure craft, cruise ships, and seagoing commercial ships.  Dramatic bridges rise high over the fjords to let tall vessels pass beneath.

Car or bus travel in Norway involves navigating winding roads, land tunnels, under sea tunnels, and ferries, and having to stop occasionally for a cow or goat to get out of the road and let you pass.  After a long day’s drive, I was driving home and my friend encouraged me to speed up.  We were approaching a ferry that would make its last run at midnight and, if we missed that ferry, we’d be stuck where we were until morning.  I sped up and, when we got to the ferry, its gate was already up and it was ready to leave the dock.  They kindly lowered the gate and waited for us.

You’ll see sod roofs all over Norway.  Winters can be harsh and the sod is good insulation.  Grass and flowers take root and it’s not unusual to see a goat grazing on a roof.

I traveled from Lofoton to Sandefjord which is 75 miles south of Oslo.  From Sandefjord, I traveled to the Heddal Stave Church, a church built in the 1200s, which is the subject of a previous blog.

Then, I traveled to Molde and Midsund on the west coast in Møre og Romsdal county.  Midsund is an island just off the coast from Molde and is only accessible by ferry.

The Molde Jazz Festival, a big annual event, was going on and my friend Unn Cathrin was performing.  Artists who appear at the festival range from big name US artists like Stevie Wonder to Norwegian jazz and pop artists, to solo musicians, including an accordion player, a banjo player, African drummers, a one-man band playing a banjo and a bass drum strapped to his back that was played by a cable tied to his foot, a father/daughter bass, drums, guitar, and harmonica band, and a South American Indian playing a flute.

Unn Cathrin’s father, Kjell, took me to Ona Island, a small island, population 40, with two lighthouses.  The older, red Ona Lighthouse, built in 1867, sits on Onakalven cliff, the highest point on Ona Island.  There are four ferries a day to Ona Island but we got there in a small, private fishing boat.  Ona is a 28-mile boat ride from Molde and Midsund.

Ona Island has been populated for centuries because of its proximity to fishing grounds further out in the Atlantic Ocean.  Residents of Ona Island have traditionally made their living from the sea but the population has dwindled and several pottery workshops have taken up residence to sell their goods to tourists.  Ona Island has a small café, lodging, a cemetery, and beautiful, desolate beaches.

On the beach, a bicycle is tied to a wooden structure by bungie cords.  A sign tells the visitor, in Norwegian, that the small beach is a coastal gem that has many visitors and visitors are asked not to use the beach as a toilet.  They need to get that message to the seagulls.  The bicycle is free to use to transport you to a toilet at the other end of the island but you are asked to return the bike after using it.

I traveled to Geirangerfjord, the most visited and most beautiful fjord in Norway.  To get there, you drive up a long, winding mountain road.  When you get to the top of the mountain, you can see Geirangerfjord below.  The photo at the top of this blog shows Unn Cathrin looking down at Geirangerfjord, two cruise ships, and the small village of Geiranger at the end of the fjord where the Geirangelva river empties into it.

The steep mountain walls of Geirangerfjord leave few habitable areas for fishing villages or farming.  It is predicted that parts of the mountain will eventually fall off into the fjord and cause a tidal wave in Geiranger.  The Norwegian disaster movie, The Wave, available on Netflix, imagines a rockslide that causes a tsunami that leads to the destruction of Geiranger.

Just around the bend from Geiranger, there is a very tall waterfall called Seven Sisters.  It is seven waterfalls that are very close together.  You only have to see a cruise ship navigating past Seven Sisters to see how big it is.

There is a very remote house built about halfway up Seven Sisters and the occupants were in trouble at one time for not paying taxes.  The only access to the house was a ladder that could be pulled up when the tax collector came to collect.  I’m not sure how that story ended but my guess is that the tax collectors won.

When we left Geiranger, we took two of Unn Cathrin’s girlfriends, Valerie Bollmann and another friend who worked at Geiranger, to Molde where they caught a bus.  The drive was three hours plus many stops along the way and a ferry or two.  Unn is Norwegian, Valerie is Swiss, and the other girl is Czechoslovakian.

All three girls speak several languages and, when we stopped to eat, they were in the middle of a conversation that ended abruptly when they all looked at me for a reply and then they broke into laughter when they realized the question they asked wasn’t in English, the only language I speak.

On my last day in Norway, we went to Atlanterhavsveien, the Atlantic Ocean Road or the Atlantic Road.  The Atlantic Road is 5.2 miles long and connects the municipalities of Averøy and Eide through an unsheltered archipelago that faces the Norwegian Sea.

The Atlantic Road was first proposed as a railway line in the early 20th century but that idea was abandoned as impractical.  Instead, the Atlantic Road began construction in 1983 and was completed in 1989.  Eight dramatic bridges connect the road.  The Atlantic Road, bridges, and volcanic rock are a great aerial photo op and are often used to film car commercials and movies.