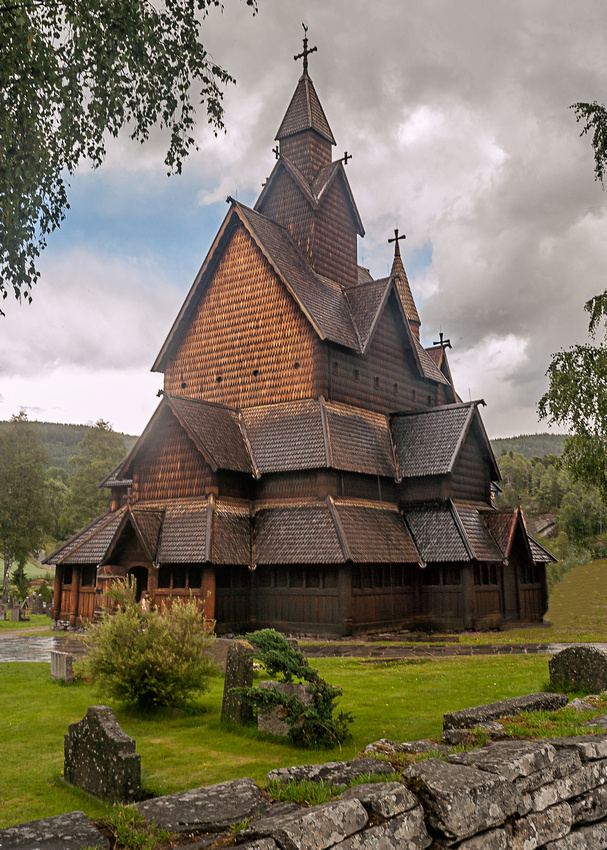 Norway’s Heddal Stave Church in the Notodden municipality in Telemark County, about 80 miles southwest of Oslo, was built in the early 1200s, the 13th century, more than two centuries before Columbus sailed to America, and still holds church services every Sunday and other events during the week.  Heddal is one of 28 Stave Churches still standing in Norway and is Norway’s largest and most beautiful but not its oldest Stave Church.

Legend says, 5 men wanted to build a church in Heddal.  One of the 5 men, Raud, met a stranger who was willing to build the church if one of 3 conditions was met before the construction was finished: fetch the sun and the moon from the sky, forfeit his life-blood, or guess the name of the stranger.  Raud agreed.

The church construction was nearing completion in 3 days and Raud wandered in the fields near Heddal wondering what the stranger’s name could be.  Then, he heard a beautiful female voice singing:

Tomorrow Finn will bring you the Moon and the Sky.

He will bring you the Sun and a Christian Heart,

so pretty Toys for my little Child to play a Part.

Raud guessed that the stranger was a mountain troll named Finn and he could avoid having to fetch the sun and moon from the sky or forfeiting his life-blood.

When the stranger met Raud in three days to present him with completed Heddal Stave Church, Raud said, “Hey, Finn, this pillar isn’t straight.”  Raud had guessed Finn’s name completing one of the 3 conditions as promised and, thereafter, Finn, the mountain troll, could not stand the sound of church bells and moved his family far away.

A Stave Church is a medieval, wooden, Christian church building that was once common in northwestern Europe.  Most of the surviving Stave Churches are in Norway.  Both Christian and pagan traditions were practiced at Haddal.

The name Stave comes from the building’s structure of post (a vertical column or pillar) and lintel (a horizontal beam) construction.  The load-bearing vertical pillars are called stav in modern Norwegian.

The vertical stave pillars are constructed from ore-pine, a cured pinewood that is the heartwood of prepared old-growth mountain pines.  The trees had their branches removed and were left to stand for 5 or 10 years or longer causing the resins to bleed upward and out through the cut branches and making the heartwood more resinous and less likely to rot or burn.

More than one piece of wood was used to construct the pillars and the pieces were joined together with a woodworker’s butterfly joints.  Heddal was built with 12 large pillars and 6 small ones.

To maintain a Stave Church, it is continually covered with a tar that smells like creosote, an oil based or wood based tar.  In the past, because no scaffolding could be attached to a Stave Church, workers with mountain climbing skills painted the churches with brushes soaked in tar.  Today, scaffolding and ladders are carefully placed to give workers access to the church without damaging it.

Given the history and origin of Stave Churches, I suspect wood based tars were first used and may still be in use today.  When I visited the Heddal Stave Church, the strong smell of tar reminded me of treated railroad ties and tarred roads.

Viking ships had pagan wood carvings of animals and dragons that were painted or covered in gold and silver.  Human and animal gargoyles and Christian crosses are carved into the door portals, eaves, and rooftop of the Heddal Stave Church.  The door portals have more modern metalwork and metal locks.

Heddal is a triple nave church but the interior is smaller than you would judge from the outside because the construction is a box within a box.  There is a corridor of several feet between the outer wall and the inner wall.  That space was used for insulation and also to store weapons.  Church members would arrive with weapons and had to store them in the corridor before entering the church.

I would have loved to shoot photos inside the church but a sign said photography was forbidden and, not seeing anyone to ask for permission, I followed the posted rules.

The interior – walls, floors, pews, chairs – of Heddal, like the exterior, is all wood and is very dark.  Intricate wood carvings are everywhere.  Some of the carvings are pagan before Heddal became a Christian church.

The Bishop’s Chair was carved in the 17th century from a pillar with pagan symbols of the Viking, Sigurd the Dragon-slayer, and was later reworked into a Christian parable about Jesus and the Devil.

Some of the wood on the wall was painted with floral designs of roses in the 1600s that painted over images and symbols from a time when Heddal was a Catholic church.  Heddal is now Evangelical Lutheran and part of the Church of Norway.  About 80% of Norwegians are Lutheran.

Baptisms, weddings, and other services can be held at Heddal but not funerals.  The door is not wide enough to get a coffin through.

The cemetery by Heddal looks ancient but I couldn’t find a tombstone older than the 1800s.