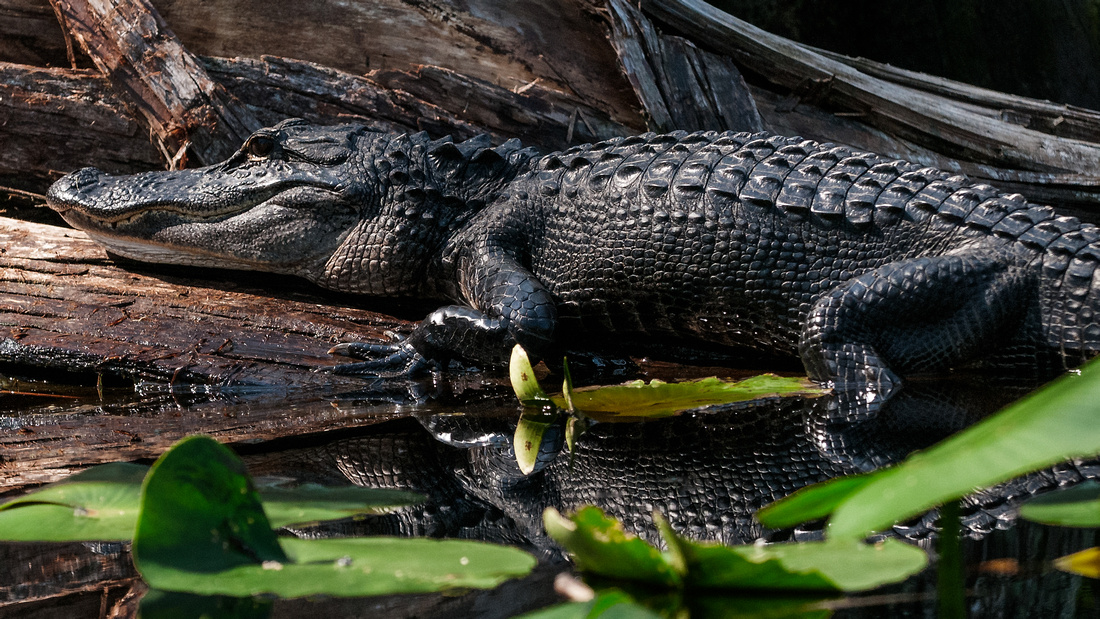 The Okefenokee Swamp is a shallow 438,000-acre peat-filled wetland that straddles northern Florida and southern Georgia.  It is the largest blackwater swamp in North America and was designated a National Natural Landmark in 1974.

The name Okefenokee is an Anglicization of the Itsate-Creek Indian words oka fenoke which mean water shaking.  The swamp was formed over the past 6,500 years by the accumulation of peat in a shallow basin on the edge of an ancient Atlantic coastal terrace, the geological relic of a Pleistocene estuary.

Longtime residents of the Okefenokee Swamp, referred to as Swampers, are of English ancestry and, due to relative isolation, used Elizabethton phrases and syntax common in England and Colonial America well into the 20th century.

The St. Marys River – correct spelling has no apostrophe – and the Suwanee River both originate in the Okefenokee Swamp.

When I think of the Okefenokee Swamp, two things come to mind: the Stephen Foster song, Swanee River, and the cartoon strip, Pogo.

Stephen Foster, the 1800s American songwriter, wrote a minstrel song for the New York blackface group, Cristy’s Minstrels, called Old Folks at Home which was better known as Swanee River. In minstrels, it was also known as Swanee Ribber.

In minstrels, the song was sung in the dialect of a black slave who was longing for the old plantation.  The lyrics have changed through the years to eliminate racially offensive words and the black slave dialect.

Stephen Foster asked his brother for river name suggestions for the first line of Old Folks at Home.  The 1st suggestion was Mississippi’s Yazoo River and the 2nd suggestion was South Carolina’s Pee Dee River.  Then, Foster’s brother searched an atlas and found Suwanee River.  Foster liked the name Suwanee but purposefully misspelled it as Swanee because a 2-syllable name fit the melody better.

The Stephen C. Foster State Park, near Fargo, Georgia, is the primary entrance to the Okefenokee Swamp.  In addition to swamp tours, and canoe, kayak, and pontoon boat rentals, there many activities, including hiking, archery, fishing, birdwatching, lectures, etc.  Cabin and campsite rentals are available.

When I think of the Okefenokee Swamp, I always think of Walt Kelly’s comic strip, Pogo, which was set in the Okefenokee Swamp.  The main characters were Pogo the possum and Albert the alligator.  Pogo was published from 1948 to 1972 and was an intelligently written mixture of humor, social and political satire, puns, and wordplay directed at children and adults.  My first knowledge of swamps and the Okefenokee came through the eyes of Pogo the possum, Albert the alligator and a large and ever changing cast of animal characters.

Through a friend, I was connected to Marty Johnson at Oke Trailmasters in Fargo, Georgia.  Marty is a Swamper, a swamp guide, who has spent most of his life near the Okefenokee swamp.

Marty’s love for the Okefenokee and his vast knowledge contributed to a wonderful day in the swamp.

As a city boy afraid of being eaten up by mosquitos and other insects, the night before the swamp tour, I bought several recommended sprays, creams, and other products.  Marty’s advice was to buy a jar of pickles and drink the juice.  I did.  I don’t know which remedy worked but I didn’t come back with a single mosquito bite.  The alligators came close but they didn’t bite either – must have been the pickle juice.

There seemed to be two kinds of boats in the swamp: canoes and flat bottom boats with a shallow draw.  Draw means the depth of the boat’s hull that is underwater.  In shallow water, that is an important consideration.

Some boats were man-powered by oars and some had very small outboard motors.

We were in the swamp for much of the day so we were in a flat bottom boat with a small motor.

The reflection on a blackwater river is as bright or brighter than the image it is reflecting.  When the boat is bobbing in the water and you don’t see any terra firma, you can easily become disoriented.  When you’re sitting low to the water, alligators are only a few feet away and that seems too close until you see that’s too close for the alligator, too, and they swim away.

Alligators in the Okefenokee are smaller than the ones in the Everglades but they can still bring down a deer.  If they kill more than they can eat in one meal, they park the rest under Lilly pads and return later for another meal.

The Okefenokee is home to as many animal critters as a Pogo cartoon strip.  Red rings around trees mark the home of endangered woodpeckers.  The male birds peck a ring of holes around the tree trunk below the nest where the female is raising young birds.  The ring of holes serves two purposes: sap oozes from the holes and makes a slippery surface for predators trying to climb the tree and the female can feed on the sap that is close to her nest.

The Okefenokee is a cypress swamp.  Cypress trees are at home in the water.  The base of the tree is swollen to several times the diameter of most of the trunk and cypress knees grow out of the water around the tree.  Spanish moss hangs from many of the cypress trees.

In the 1800s, logging companies harvested so many cypress trees, the Okefenokee Swamp was in danger.  Railroad tracks were laid to support the logging industry and a canal was built in a failed attempt to drain the swamp.

Today, the Okefenokee National Wildlife Refuge is a National Natural Land mark, is federally protected, and the swamp, the cypress trees, the alligators, birds, and other animals are doing well.

They outlived the Pogo comic strip that ceased publication in 1972 when newspapers shrunk the size allotted to comics making Pogo’s dense dialog and complicated artwork – for a comic strip – hard to read.  You can Google Pogo comic strip for a taste of one of the greatest comic strips of all time.