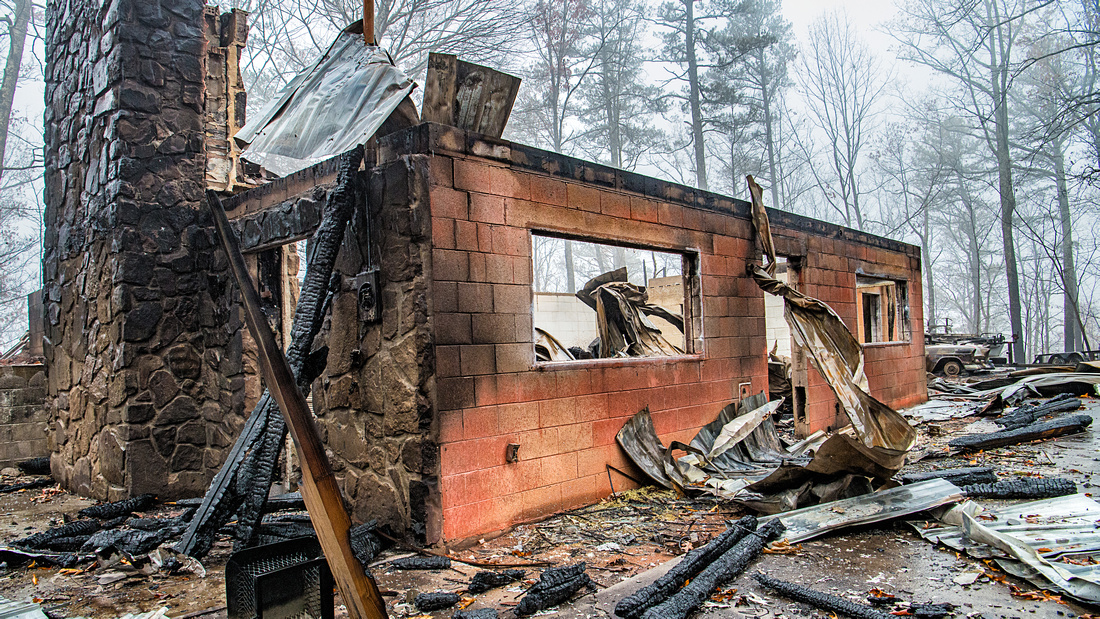 The Great Smoky Mountains National Park covers 816 square miles of TN and NC and is the most visited US national park.  For most visitors, Gatlinburg, TN is the gateway to the Smoky Mountains.  After months of drought in the area, two teenage boys, 15 and 17, threw lit matches on the ground that started the devastating Gatlinburg wildfires.  Fourteen lives were lost in the fires, more than 17,000 acres burned, and 2,000 structures were damaged or destroyed.  Downtown Gatlinburg was on fire and access to the area was limited to firefighters and emergency crews for days.

I visited Gatlinburg to check on a couple of friends and, hopefully, to shoot photos of the fire damage.  A Gatlinburg friend drove me to areas that weren’t off limits – there were checkpoints and a 6pm to 6am curfew – and I saw many homes and rental cabins that were burned to the ground.  Cars were gutted by the fires.  Trees and power lines were down.

I saw some emergency crews dealing with power and phone lines but didn’t see one person trying to salvage belongings from their homes.  The fires were so devastating there was nothing to salvage.

What survived the fires was brickwork, metal, and, most notably, stone chimneys.

The most used construction was a few feet or entire walls of concrete blocks, aka Breeko Blocks or cinder blocks.  Those walls were covered or continued with wood that didn’t survive the fires.

In the center of what used to be homes, there were metal chairs, a satellite TV dish, duct work, metal roofs, computer chassis, air conditioners, a filing cabinet, washing machines, a bathtub, etc.

Outside homes there were metal railings that used to be attached to burned wooden steps, bear-proof trash cans, stone walkways, a metal birdcage, gutters and downspouts, a child’s wagon, a bicycle, etc.

Cars were sitting on their rims, their rubber tires burned off.  Dashboards, steering wheels, bumpers, grills, and seats were gone.

The International Search & Rescue Advisory Group (INSARAG) and the Federal Emergency Management Agency (FEMA) have developed codes for displaying information about searched building, cars, and other structures.  Those codes let others know the results of a search.

Search codes were on many Gatlinburg buildings, cars, and other structures but few used the full range of available codes.  Sometimes, just a simple X let others know a search was conducted.

The FEMA Search Code starts with a large X, about 1 or 2 feet tall, that divides that area into four quadrants at 12 o’clock, 3 o’clock, 6 o’clock, and 9 o’clock.

In the 12 o’clock quadrant, search teams enter the date and time of the search.

In the 3 o’clock quadrant, abbreviations for hazards are listed.  For instance: NE means no entry, RATS means rats are present, EX or EXT mean the exterior survived, and F/W means food or water are present.

I didn’t see one search code that indicated a death but I did see one home that had a large X with no codes on a car.  On the nearby house's wall, an arrow pointed to two Xs.  I assume that arrow was to alert other search teams to those locations but I don’t know if the Xs indicated that people died there.

You may have seen an image similar to the first image in my Gatlinburg Fires gallery.  Two thirds of a sign on the Parkway that directed people to the Gatlinburg Welcome Center was burned and someone placed an American flag in the place where the sign was missing.

Some chimneys left standing had a fireplace where the first and second floors used to be.

I saw a few smoldering fires – smoke and no flames but still dangerous.  I shot photos in a welcome, near constant light rain.

The Banner Baptist Church on Beech Rd. appeared to be undamaged but an adjacent small building I assume was built as an add-on was burned to the ground.  Metal chairs still stood in the building.  I walked through the thick white ash of the building to get a photo of the building in the foreground and the church in the background.  When I walked out of the building it felt like an inch of white ash was stuck to my shoes and I left white footsteps on the sidewalk leading back to the church.

A distribution center was set up in a large building that used to house American Bandstand.  An image of Dick Clark was still on the side of the building.  People affected by the fire could get food donations and other supplies there.

In the parking lot, there were trailers that housed disaster relief organizations, insurance companies, Tennessee Command and Communications, and Disabled American Vets.  The parking lot was full of vehicles with out of state tags.  In these days of divisiveness, it’s encouraging to see how people can work together to help their neighbors or people they don’t know.

And finally, I met a friendly, alert service dog that preferred a straight on shot over a profile that showed his Service Dog vest.  I don’t know if he served a purpose in disaster relief but he was certainly a handsome dog.