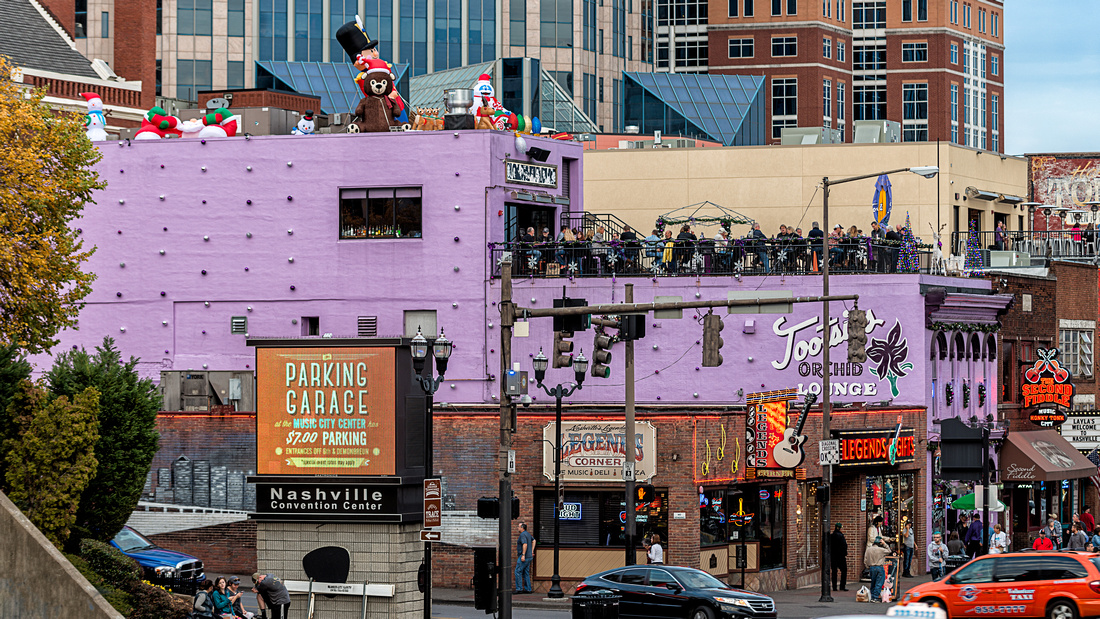 Tootsie Bess (Hattie Louise Bess) bought the bar location in 1960 and the original name was Mom’s.  She was surprised, maybe shocked, when a painter painted the bar purple but decided to rename the bar Tootsie’s Orchid Lounge.

Tootsie’s connection with Country Music came about because performers on the Grand Ole Opry could walk out the door of the Ryman Auditorium, in between Opry spots, into an alley, and into the rear entrance of Tootsie’s.  Classic Country songs were written at Tootsie’s, deals were made, beers were consumed, musicians were hired for road gigs, and stories were told.  Young hopefuls still perform for tips while trying to break into the lucrative mainstream Country Music business.  Occasionally, a successful artist will return to Tootsie’s for an unannounced or ballyhooed performance.

Tootsie was famous for using a hatpin to poke troublemaking customers and, at some point, Charley Pride gave her a jeweled hatpin.

Tootsie had a cigar box behind the counter that was full of IOUs she collected when she gave food and drink to those who couldn’t pay.  At the end of the year, Opry artists would pitch in and buy back the unpaid IOUs.

Tootsie died in 1976 and was buried in a purple gown in a purple casket with an orchid in her hand.  Many famous Country artists and musicians were at the funeral and Connie Smith sang some of Tootsie’s favorite hymns.

Tootsie’s celebrated its 50th anniversary in 2010.  The name of the bar is still Tootsie’s Orchid Lounge and the color is still purple.

The walls of Tootsie’s are covered with photos and album covers that have been there for decades.  You’d have to know where to look but a very small photo of my brother Larry and me from long ago is on the wall.  It was, at one time, in the covered bar top.  When they replaced the bar top with one that was larger, they hung the old bar top on the wall behind the second story bar.  Being on the wall of Tootsie’s is ironic because we were never drinkers, preferring to cross the street to a Lower Broadway restaurant called Linebaugh’s where the non-drinkers ate inexpensive, mostly bad food, and Marty Robbins played the pinball machine.  Even though we didn’t drink, the shortest route to Linebaugh’s was through Tootsie’s so we have Tootsie’s memories, too.

Today, Tootsie’s has a second-floor bar and a third floor that has a new Lower Broadway favorite open-air, rooftop bar.

The rooftop of the enclosed part of the third floor is now home to oversized Christmas decorations: snowmen, a bear, a soldier from the Christmas classic, The Nutcracker, etc.  I think Tootsie would be proud.

In the photo at the link below, you can see the sloped roof of the Ryman Auditorium in the upper left-hand corner.

There's only one photo in this blog but you can click below to see the photo in full screen.