Greenwood Cemetery - City of the Dead 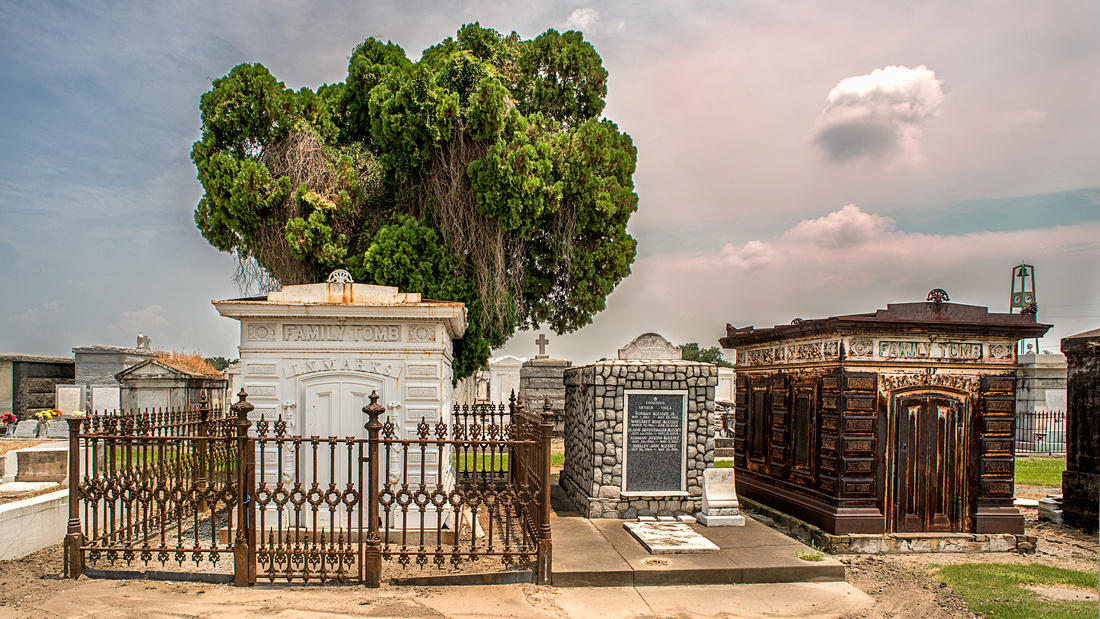 There is an unusual, unforgettable fact about New Orleans; because New Orleans is built on a delta, the dead are buried above ground.  The water table in the New Orleans delta is just a few feet below the surface and caskets buried at what would be a normal six-foot depth would be under water and would occasionally rise out of the ground.

Early New Orleans settlers buried their dead in shallow graves to get coffins above the water table to keep them from rising to the surface.  When that didn’t solve the problem, they tried placing stones on the buried coffins to keep them down.  Those solutions didn’t work either so they began burying their dead in tombs that are above ground.

New Orleans may have the only above ground cemeteries in the US.  I don’t know of another one.

New Orleans cemeteries of above ground tombs look like miniature cityscapes with tombs that look like houses with slanted roofs and have been called Cities of the Dead.

Greenwood Cemetery opened in 1852 on City Park Avenue in the Navarre neighborhood of New Orleans and is less than 4 miles northwest of the French Quarter.

At the end of Canal Street, there is an area called the Cemeteries.  When you get off the Canal Streetcar, you’re standing at the apex of a triangle of three cemeteries.  To the left is Cypress Grove, to the right, Odd Fellows’ Rest, and across City Park Avenue from the streetcar terminal is Greenwood Cemetery.  Greenwood and Cypress Grove are two of the oldest cemeteries in the city.

When you approach Greenwood Cemetery, you can’t miss several large monuments, including a 46-foot memorial to the Firefighter's Chartable Association featuring a six-foot statue of a fireman, a neo-Gothic design that was inspired by Sir Walter Scott’s monument in Edinburgh, Scotland, and a 1912 memorial and tomb for the Benevolent and Protective Order of Elks.  That tomb, a tumulus, is a mausoleum where the burial vaults are covered by an earthen mound.  A majestic statue of an elk stands guard on the top of the earthen mound.

Greenwood Cemetery was established by the Firemen’s Charitable and Benevolent Association after their success with Cypress Grove Cemetery.  By building entire cemeteries, the Firemen’s Charitable Association could sell plots for gravesites and tombs to those with means and generate the revenue needed to bury firefighting heroes who couldn’t afford the burial sites.  Over 600 Confederate soldiers are also interred at Greenwood.

Greenwood Cemetery utilizes small lot sizes (6 feet by 9 feet) and is one of the city’s largest cemeteries in volume.  Many families buy double lots or larger.  There are about 20,500 lots with on average 1,000 interments each year.  The entrances to Greenwood are decorated with 5 memorials, but aside from this, most tombs are arranged to provide maximum occupancy so architectural or landscape beautification is placed at a lesser priority.

Greenwood Cemetery has grassy walkways and streets and street signs like any city and maps to guide you to a specific tomb.  Early in my visit, I helped one older couple navigate to a friend or loved one’s tomb.  I saw few family and friends, many cemetery employees taking care of the tombs, and only a couple of photographer tourists like me.

The oldest Greenwood tombs were built over 160 years ago and the construction methods and condition of the tombs varies.  Basic building materials range from small to large roughhewn stone to polished marble.

Most gravesites are literally tombs but it looks like some sites have coffins buried beneath several feet of built up earth with some of those plots covered with crushed stone.  Some tombs are adorned with Mardi Gras beads in the spirit of New Orleans.  On holiday nights, votive candles on tombs light the way for friends, family, and visitors.

A few steps lead up to most tombs with statuettes and flower urns on the steps to discourage visitors from climbing the steps.  Some walls and doors have elaborate carved figures, including a carving of two near life-size angels, but most doors are engraved with the names of the departed.  Most tombs are topped by stone crosses.

Some tombs are surrounded by iron fences that have rusted and corroded through the years.  The exterior of one tomb is badly corroded iron.

Tombs are for family burials.  I saw so many names on many tombs that I wondered how they could contain that many caskets.

The dead are first entombed in caskets.  By local law, you must wait a year and a day before adding a second person to a tomb.  When a previously deceased family member has been dead for two years, the remains of that person can be moved to a burial bag and placed at the side or back of the vault.  The coffin is destroyed and the vault is now ready for a newly deceased family member.

If a tomb has no more space while waiting for two years to move a family member out of a coffin, local cemeteries are equipped with temporary holding vaults and the newly deceased family member is moved into his or her final resting place when space can be made in the tomb.

In 2005, Hurricane Katrina left Greenwood Cemetery under water and they are probably still recovering from the damage Katrina caused.  The pieces of one engraved tablet from the 1800s were laid out on a piece of marble like a jigsaw puzzle that will never be put together again.

There are 42 cemeteries in New Orleans.  Some of the cemeteries attract muggers and are not safe, especially if you visit them alone.