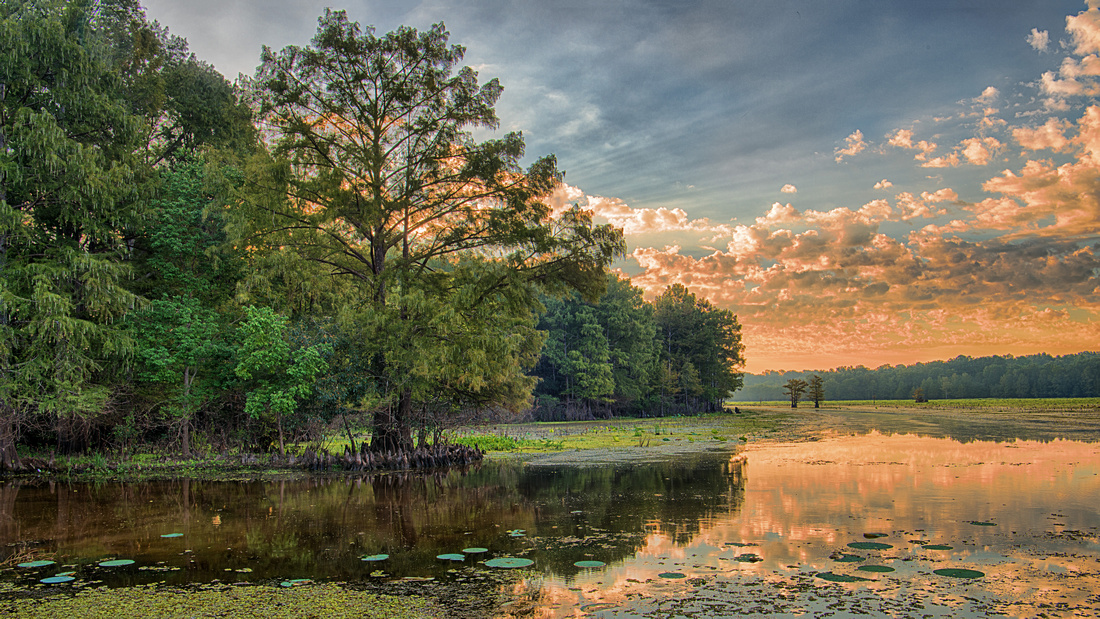 Caddo Lake [kad-oh] straddles the Texas and Louisiana borders; half the lake is in East Texas and half is in West Louisiana.  Shreveport, LA, about 30 miles southeast of Caddo Lake, is the closest big city.

A number of small towns could lay claim to being home of Caddo Lake but I like to think its home is Uncertain, TX because I spent more time there, found the best but limited access to the lake there, and because…who wouldn’t like a town named Uncertain.

Uncertain has a population of about 150 and is located on the shore of Caddo Lake.  It got its name from surveyors who were attempting to survey the border between TX and LA but discovered they were uncertain about which side of the line they were on when they began surveying.

Uncertain has a number of buildings that bear its name, including the Uncertain Flea Market, the Uncertain Inn, the Uncertain General Store, the Uncertain Tavern, and the non-denominational Church of Uncertain which is not a church of agnostics, as the name implies, but, according to a sign by the roadway, a church “Where God is Lord”.  Thanks for that much needed clarification.

The Caddo Lake area is flood prone and many of the homes and trailers near the lake are on stilts to protect them from rising waters.

Uncertain was the filming location for two swamp movies, Curse of the Swamp Creature in 1966 and Shark Night 3D in 2010.

The Caddo Lake area reports hundreds of Texas Bigfoot sightings each year and the Texas Bigfoot Research Center, located in nearby Jefferson, TX, stages a conference each autumn with multiple field trips into the backcountry to search for Texas Bigfoot.

Caddo Lake is a 25,400-acre lake and wetland bayou that supports dense vegetation, 189 species of trees and shrubs, 75 grasses, 42 woody vines, 216 kinds of birds, 90 fishes and reptiles, and 47 mammals.  Mayhaw fruit is collected from the lake to make a jelly that is considered one of the finest in the world.  Forty-four of Caddo Lake's native species are either endangered, threatened, or rare.  Wildlife include waterfowl, alligators, turtles, frogs, snakes, raccoons, minks, nutrias, beavers, squirrels, armadillos, and white-tailed deer.  Caddo Lake is one of the largest flooded cypress forests in the United States.

Caddo Lake was named after Native American Indians called Caddoans or Caddo who lived in the area before they were forced into a Texas reservation and then into Indian Territory in 1859.

An old Caddoan legend says the Great Spirit warned a Caddo Chief to move his village or the earth would swallow it.  He ignored the warning.  Not long afterward, the Chief was leading a hunting party a great distance away when the ground began to shake violently and, when he returned to his village, the Chief discovered it had sunk beneath a lake that never existed before.

According to another legend, Caddo Lake and West Tennessee’s Reelfoot Lake, both cypress swamps today, were formed by the 1811-1812 New Madrid earthquakes but most geologists say Caddo Lake was formed, gradually or catastrophically, by the Great Raft, a 100-mile logjam on the Red River in Louisiana which flooded the low-lying basin that is now Caddo Lake.

I wondered why Jefferson, TX, the largest town in the area and the County Seat of Marion County was so far from Caddo Lake and its once booming riverboat economy.  Several lakeside towns, including Jefferson, TX, had thriving riverboat ports on the lake until the Great Raft logjam was cleared, lowering the lake by 10 feet and destroying the East Texas ports and their riverboat industries.

When oil was discovered beneath the lake, the world’s first over-water drilling platform was built in Caddo Lake in 1911.  The oil industry soon left for nearby areas that had more oil and were easier and cheaper to drill.  They left Caddo Lake more polluted than when they arrived.

Longhorn Army Ammunition Plant on the shores of Caddo Lake also polluted large portions of the surrounding wetlands until its closure in the 1990s.  Most of the former plant site is now a federal wildlife refuge.

I love the beauty and unusual diversity of cypress swamps.  In Caddo Lake, bald cypress trees that typically grow at water’s edge or in shallow, still waters are draped with Span­ish moss and tower over the maze of bayous, sloughs, and ponds.  What makes Caddo Lake different from other cypress swamps I’ve visited is giant salvinia which threatens the life of the lake’s indigenous flora and fauna and threatens the local tourist attractions of fishing and duck hunting.

Since 2006, Caddo Lake has been taken over by the non-indigenous, Velcro-like, free floating, aquatic fern known as giant salvinia that is native to Brazil and was accidentally introduced into the lake by boaters.  Salvinia doubles in size every 2 to 4 days and kills off aquatic life below the surface.  It grows best in still waters and Caddo Lake is its perfect habitat.  Salvinia has virtually killed fishing in the area and fewer lily pads and other indigenous aquatic plants survive.

Salvinia damages aquatic ecosystems by outgrowing and replacing native plants that provide food and habitat for native animals and waterfowl.  It blocks out sunlight and decreases oxygen concentrations to the detriment of fish and other aquatic animals and, when plant masses die, decomposition lowers dissolved oxygen still further.

Caddo Lake is still a duck hunting destination but fewer ducks stop at the lake.  You will still see duck blinds in the lake and hear the shotguns of duck hunters but I’m sure they find fewer targets.  I heard many shotgun blasts but I didn’t see one duck.  For migratory ducks, Caddo has become a fly-over lake.

The images in my Caddo Lake gallery are deceptive.  What looks like a flat, green, grass-covered meadow where many cypress trees grow is actually a lake covered with salvinia.  It would be easy to make a step close to the shore onto what you see as land covered with green foliage only to sink into the lake below the salvinia.  I avoided that mistake.  I included 4 short videos in my Caddo Lake gallery taken when I boated over the salvinia covered lake to show the lake's deceptive look.

The Caddo Lake Salvinia Eradication Project is evaluating multiple methods of salvinia eradication.  Biological, chemical, mechanical, and other means have been tried.  Beetles that normally eat salvinia were brought in but the beetles couldn’t survive the cold Texas winters.  Herbicides are in use but must not be too effective because the lake is still covered with salvinia.  The worst salvinia proliferation is on the Louisiana side of the lake because Louisiana is still committing all available funds to recovering from Hurricanes Katrina and Rita.

It is illegal to transport giant salvinia on boat trailers or boat motors so boaters have to wash their boats down before leaving the lake to reduce the chance of contaminating other lakes with salvinia.  This is actually standard policy for boaters, wading fishermen, or any ecosystem conscious person or thing that enters a lake or river.  Cross contamination can happen easily but can be very difficult to eradicate.

Caddo Lake is home to owls, alligators, eagles, migratory ducks, egrets, and other birds.  I saw one snake sitting on top of salvinia in the lake and a handful of egrets from a great distance.  One morning, I went to Caddo Lake State Park with my long 500mm lens because I heard it was the best place to spot egrets and migratory birds.  I stayed a couple of hours and didn’t see one egret.

Caddo Lake was a stopover on my return trip to Houston.  After looking at maps, I drove to Uncertain, TX before sunset but, even with 3 GPS systems – a Garmin dash-mount, a laptop GPS, and a cellphone GPS – the sun went down before I could see Caddo Lake except through private lakeside properties.

I got up early the next morning and spent 2 hours driving every remote road that ran alongside the lake with the same results as the night before.  I finally found a boat ramp in Uncertain that got me to the edge of the lake with a very limited view of the lake.

I asked a man taking cellphone photos at the boat ramp about the best access point to take photos.  He was a local man named Tim Gulk and he said most of the lakeside land was private property and there weren’t many places where you could actually see the lake.  I asked if there were boat tours and there were.  After more conversation, Tim said he’d go home, get his boat, and take me out on the lake.

In my travels around the US and around the world, I’ve been lucky to meet local people who went out of their way to make my trip a great memory and Tim contributed to another memorable day.  He’s not a tour guide, he’s in the concrete business, but he went home to get his mud boat, a mudder, a flat bottom boat that has a shallow draw and seems to be favored in my trips to the sometimes shallow Okefenokee Swamp, Reelfoot Lake, and Caddo Lake.

Way back in the lake, Tim shut the motor down and the only sounds I heard were an occasional duck hunter’s shotgun blast and sounds from a nearby army base.  Another earlier sound was one loud, hot-rodded motorboat that kicked up rooster tails, the water spray that is kicked up high in the air behind a motorboat.  How utterly inappropriate in a cypress swamp.  The few other people on the lake were in motorboats and noiseless canoes and kayaks.

We spent several hours on the lake where I shot most of the images in my Caddo Lake gallery and where Tim told me the history of Caddo Lake.  It was a great day.

Don’t miss the four short cellphone videos in my Caddo Lake gallery that follow the photo of my lake tour guide, Tim Gulk.  They show how it feels to boat over what looks like a grassy field but is actually a salvinia covered lake.