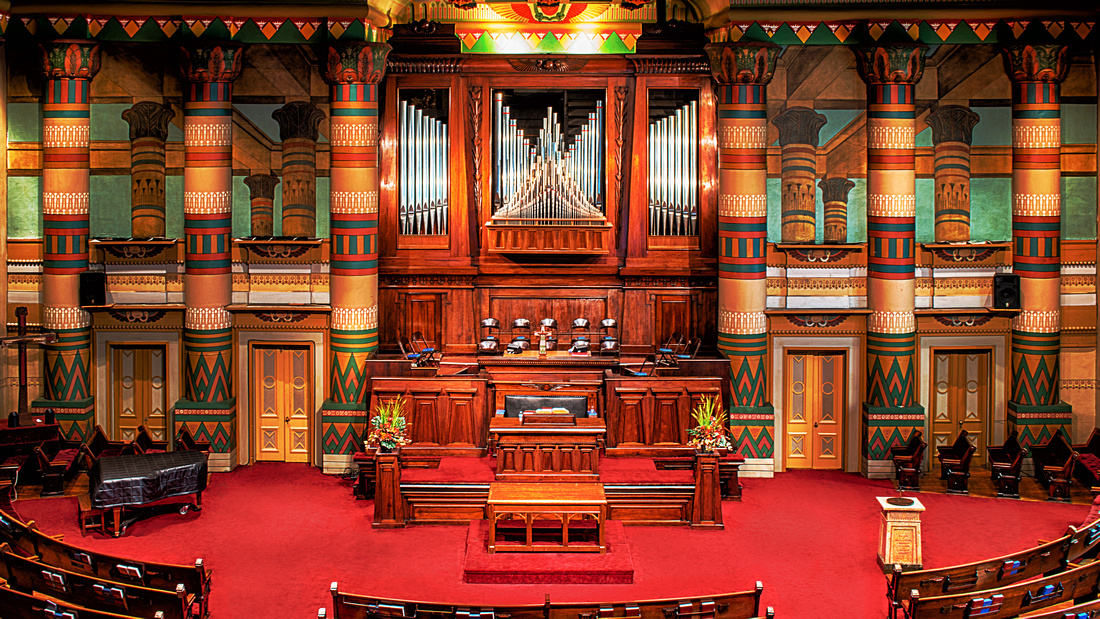 The Downtown Presbyterian Church in Nashville, formerly named the First Presbyterian Church, is designated a National Historic Landmark for good reasons, including its historic value and because it is one of the country’s finest surviving ecclesiastical examples of Egyptian Revival architecture.

The church was built in 1816, burned down in 1832, and was rebuilt that same year.  The second structure also burned in 1848 and was rebuilt as the present day church.  As of today, congregations have worshipped there for 200 years.

The present day sanctuary was designed by William Strickland who also designed the Tennessee State Capitol.

Egyptian Revival architecture was widely reported on in Western publications at the time the sanctuary was commissioned and was used in the building's construction.  A winged sun on the edifice represents the pagan Ra the Sun God – an odd ornament for a Christian church.

Regardless of the juxtaposition of pagan and Christian symbols, the now named Downtown Presbyterian Church is a Nashville and national treasure.  The sanctuary is a tableau of three dimensional columns and painted, two dimensional backdrops in vibrant, warm colors and Egyptian themed geometric patterns.  The dimly lit interior makes it hard for a camera to capture the beauty of the sanctuary the eye can see.

In 1858, a decade after the church was rebuilt for the second time, a pipe organ was installed at the rear of the sanctuary.  During the Civil War, the Union Army occupied the church and everything, including the pipe organ, was removed.

After the Civil War, restitution was made to the church and, in 1913, the current pipe organ was installed.  It had 37 ranks, 2,130 pipes, and also had a chime system and echo organ installed in the balcony.

The organ was renovated in 1972 and again in 2008.  The latest renovation included re-leathering 250 manual motors and updating the internal parts of the echo organ.  The organ now has 40 stop actions, 20 pedal borrows, and 85 large and small pedal pouches.

The shiny metal pipes of the pipe organ tower over the dais in the sanctuary and add drama and a modern element to the Egyptian scene.  The pipe organ and choir perform each Sunday and an annual pipe organ recital draws people from all over the country.

Tennessee Governor James K. Polk was inaugurated in the second, smaller sanctuary in 1839.

In the 1860s, the present church building was seized by Federal forces and served as a military hospital during the Civil War.  It temporarily became Nashville's Union Hospital No. 8 with 206 beds.

The church was used by Nashville's citizens as a refuge from the floods of 1927 and 1937, by soldiers during the Second World War when soldiers on leave slept there by the thousands, and presently, as an active social ministry to the less fortunate.

In 1954, the then named First Presbyterian Church congregation decided to move to the suburbs and the downtown church faced possible demolition.  The church building was sold to members who wanted to continue to worship at the old, historic site and, in 1955, the name was changed to the Downtown Presbyterian Church.

The morning I shot the image of the sanctuary, I passed a line of people waiting to enter a side door to The Contributor office.  And then, I opened the wrong door and entered a room where many homeless people were eating and using computers, I suppose, to access the internet.

For over a decade, the 3rd floor of the church has been a place for artists.  Art is created there, currently by 8 artists, and there are regular art exhibits and an annual Art Crawl.  The artists give back by donating time and energy to the homeless ministry and hosting the Hodge Podge Lodge, an art camp for kids.

The church is also a meeting place for Alcoholics Anonymous.

And, finally, the church is a wonderful place for a wedding.  You don’t have to be a member to secure a wedding date but you do have to apply online and post a deposit.  I’d love to shoot a wedding in the church's Egyptian Revival sanctuary with the 100 year-old organ playing Pachelbel’s Canon in D and Richard Wagner’s popularly named Here Comes the Bride.

The Downtown Presbyterian Church is a beautiful place with an important place in Nashville history and a heart for the Nashville homeless and downtrodden of today.

My next visit will be to hear the choir and pipe organ on a Sunday morning.