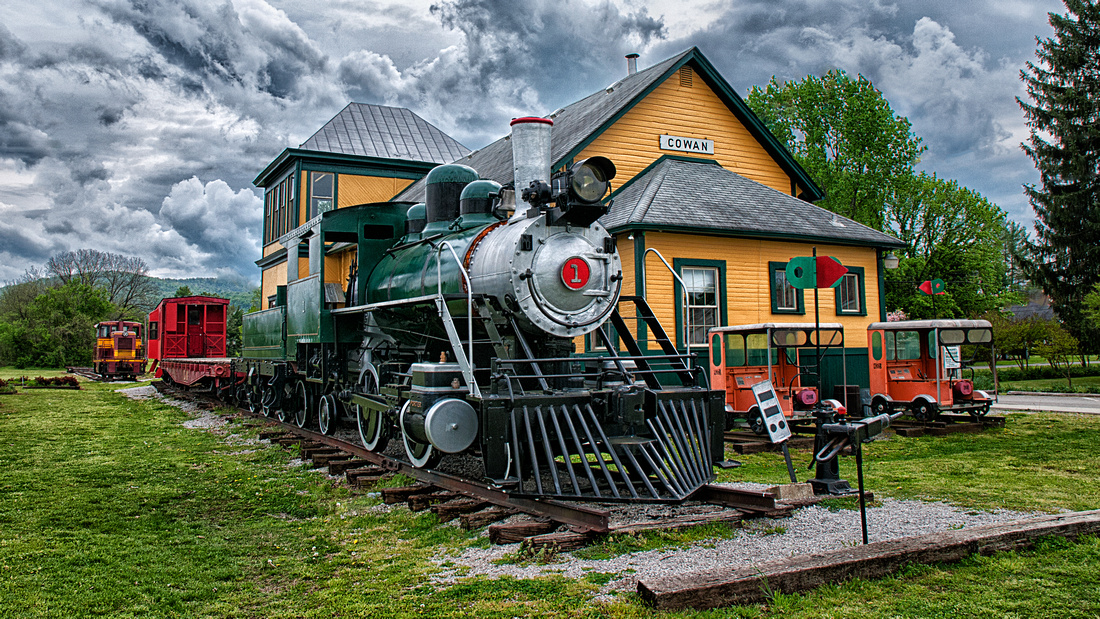 Steam Locomotive #1 is on display at the Cowan Railway Museum in Cowan, TN, a small town of fewer than 1,800 inhabitants about 50 miles northwest of Chattanooga, TN and 12 miles west of Monteagle, TN which, at 2000 feet, is the highest Cumberland Plateau elevation on I-24 between Nashville and Chattanooga.

The small steam locomotive was built by the Whyte System in 1920 and designated as a Columbia Type (2-4-2) locomotive.

It was formerly a tenderless, tank-style locomotive.  A tender or coal-car is a railcar hauled by steam locomotives that carries its fuel (wood, coal, or oil) and water.

This locomotive was later converted with the addition of a small homemade tender and the removal of the side or saddle tank (the water tank carried above the boiler of some steam locomotives). The oversized cab formerly contained a small coal bunker at its rear.

This 2-4-2 locomotive is a very rare make and was first owned by Mr. William Elliott Dunwady, owner of the Cherokee Brick Company in Macon, GA, about 1920.

It was especially suited for the brick company's needs and pulled six yard side cars loaded with clay from the clay pits to the foundry.  The locomotive's engine size was limited for two reasons:  it did not pull great weights and it had to be small to function on the Cherokee Brick Company line.

The Tennessee Valley Railroad Museum in Chattanooga acquired the locomotive and sold it to the Cowan Railway Museum in 1979 where it has been on display since then.

Although Steam Locomotive #1 no longer runs, you can stand in the little engine’s cab as the big diesel-pulled freights come roaring through Cowan, TN on the now busy CSX line.  You’ll get the feeling of another era from the vibration as you hear the powerful pushers approaching with speed to hit the 2-mile, 2% grade up to the Cumberland Mountain Tunnel that passes southbound through the Cumberland Mountains.

Today, since the loss of a couple of sustaining businesses and a dwindling population, Cowan is struggling to find its place but it is a wonderful small town to visit, just 12 miles off I-24.

If you’re inspired to visit Cowan, don’t miss a great cabinet maker/woodworker’s shop in the small downtown and a surprisingly good, locally owned, nicely decorated Italian Restaurant, Sernicola’s, just across the rails from the Cowan Railway Museum.  Sernicola's owners are the second or third generation of Italian immigrates who came to America in 1922 to escape the political pressures of Mussolini's dictatorship.  They use family recipes and get new inspiration from their trips to Italy.  They had just returned from Italy when I was there.