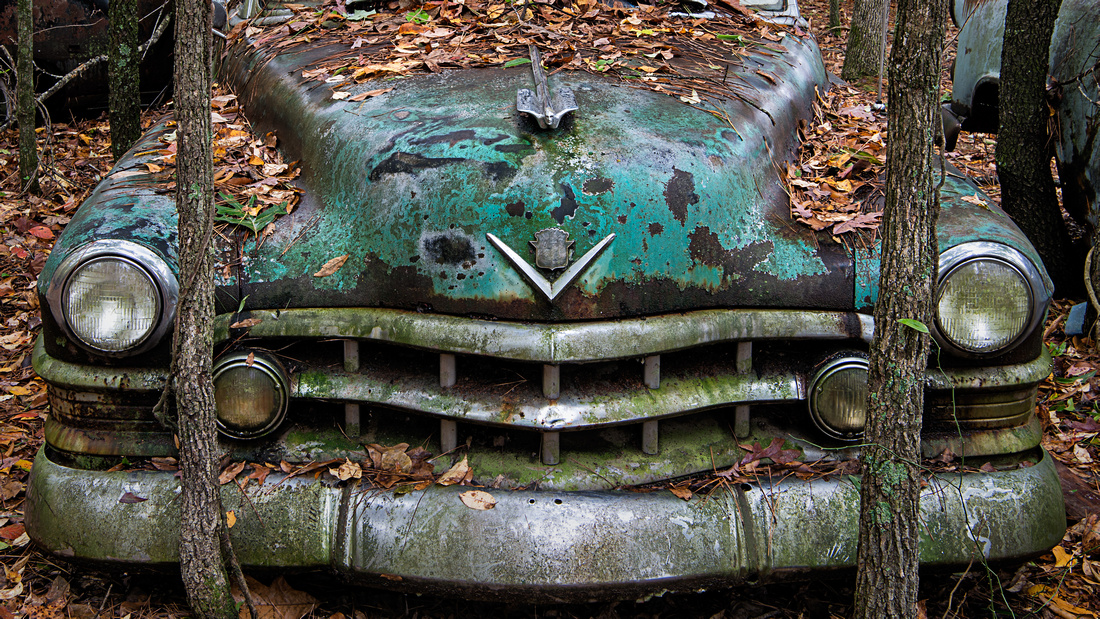 Old Car City is a family owned and operated business 50 miles northwest of Atlanta on I-75 and about 3 miles north on Highway 411.  It was started by Walter Lewis as a junk yard in 1931 a couple of years into the Great Depression when shade tree mechanics had to keep old cars running since they couldn’t afford to buy new or newer cars.  Walter Lewis’ son, Dean Lewis, is the current owner.  He was born in the junk yard.

Old Car City claims to have over 4,000 cars on 34 acres that cover 6 miles of trails populated by mostly American cars manufactured from 1918 to 1972 but no later.  Dean Lewis calls late model cars throwaway junk.  His cars are “American Iron”.  A sign says Old Car City is “the world’s largest knowd old car junkyard”.

Since Old Car City was once a junk yard, many of the cars are missing engines, transmissions, trunk lids, hoods, and other parts that could be harvested to keep another car running.

Some of the cars have been there for 60 years.  Dean Lewis calls a few of the cars flowerpots because trees have grown up where the engine used to be or in the middle of the car’s body.  Some trees lifted cars off the ground as they grew.

The acreage is wooded and the cars and pathways are covered with the orange, brown, and reddish colors of fallen leaves, and pine cones and needles from the tall Georgia pine trees.  Car paint is faded or turned to rust adding to that color palette.

Another color palette comes from the light that filters though the canopy of remaining leaves and pine needles giving it a soft green cast, a thin green patina covering the cars’ rusted metal, chrome bumpers, glass windows, and tires, and moss that covers fabric seats, wood, and other places where more moisture can be held.

One mystery I saw over and over is tracks on the cars that look like Christmas ribbon candy.  The tracks spiraled back and forth for short distances.  I suspect these tracks were made by a worm.  I found references to worms making spiral tracks but couldn’t find a photo of those tracks for comparison.

There are warning signs and warnings painted on cars telling you not to smoke.  The thick layer of fallen leaves, pine cones, pine needles, and broken tree limbs make the 34 acres a tinderbox just waiting for a dropped cigarette or a lightning strike.

Old Car City is home to cars, vans, school buses, tractors, and bicycles.  Some effort was made to organize the cars.  One path is marked General Motors Blvd. to help you find that replacement part for your General Motors vehicle but the organization system wasn’t always adhered to.  School buses, vans, tractors, etc. can be found in many places.  Transmissions, engine blocks, a bathroom sink, and a cash register lie in unexpected places.  A couple of pathways use gutted transmissions to mark the way.

Dean Lewis doesn’t use the term junk yard but prefers calling Old Car City a 34-acre piece of art that features antique vehicles.  It is definitely a place of memories where you might find a car a younger you, your dad, or your grandfather drove.  I heard more than one person, old and young, excitedly point out a car from their past.  To them, the car with no engine, broken windows, and covered in rust, a green patina, and moss was more than junk.  I found a couple of cars from my past, too.  I didn’t see an orange VW bus as it is today but as it was when Dad drove one just like it.

Walking down the trails, the smell of Georgia pines is refreshing.  The only sounds in this rural area are birds, the crunch of leaves, pine cones, pine needles, and fallen tree limbs underfoot, chimes made from hubcaps and exhaust tailpipes, and the nearby out of tune New Cass High School band rehearsing on their football field.

Old Car City is billed as a Photographer’s Paradise but at least one sign says it is a Photogaphers’ Paradise and that was after new paint was added, I suppose, to correct another even more egregious spelling error.  Photographers (or photogaphers) might be Old Car City’s paradise.  Admission, if you don’t take photos, is $15 (cash only); if you take photos, it is $25 (cash only) – an added $10 photographer fine for taking photos that give Old Car City free advertising.

Because of the complexity of modern cars, shade tree mechanics and junk yards are in decline.  The modern junk yard is called an automotive recycler and is computerized to help you find the right part, has to deal with tougher land use laws, and has specialists to deal with electronically reprogramming some parts.

Dean Lewis says business is better now than when he sold recycled car parts.  A big part of that business is thanks to photographers who travel from all over the country and all over the world to shoot photos of “American Iron”.

Old Car City has been getting a lot of media coverage lately from CBS’ Sunday Morning, The New York Times, Hot Rod Magazine, and more.