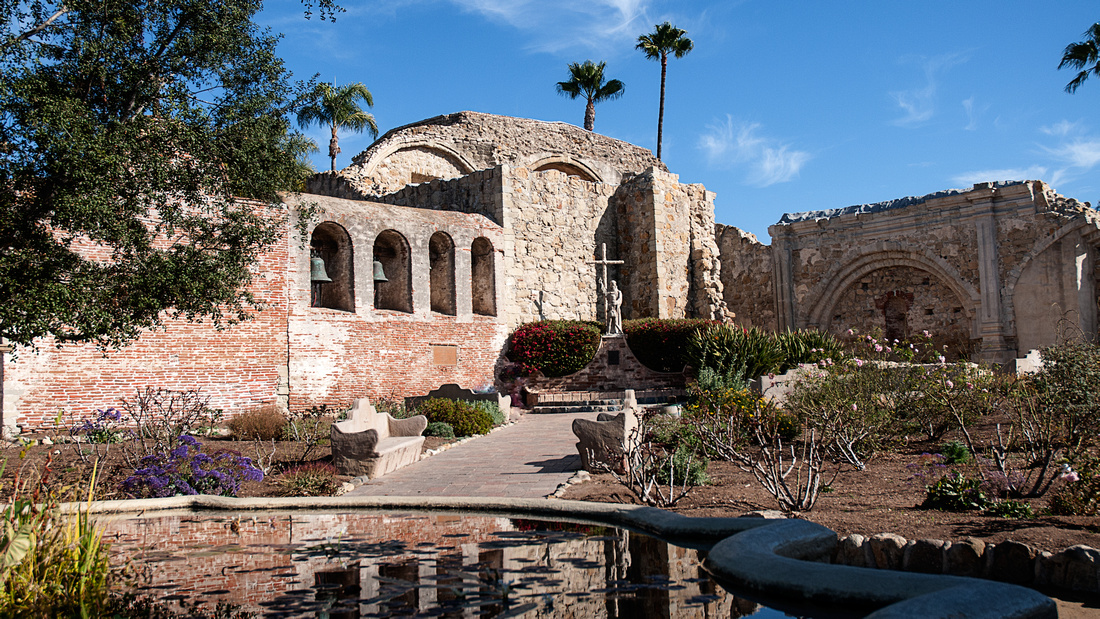 Mission San Juan Capistrano is California’s best known Spanish Catholic Mission.  It is about 60 miles north of San Diego where Europeans first came ashore in present day California in 1542 at Point Loma.  The Mission is roughly halfway between San Diego and Los Angeles and about 4 miles inland near the San Juan Creek, aka the San Juan River, the Mission’s source of water, which flows into the Pacific Ocean.

The Mission was named for Giovanni da Capistrano, an Italian “warrior priest”.  The site of San Juan Capistrano was first settled in 1775 but abandoned for a time due to unrest in the indigenous population – mostly Juaneño Indians – then, finally settled in 1776.

Mission San Juan Capistrano was abandoned later in 1775 after Indians killed one of the missionaries.  Before they left, the missionaries buried the two Mission bells to keep them safe.  When they returned a year later, they dug up the bells.  I have a photo in my gallery that I believe is of those two original Mission bells.

It is no surprise that Spanish Missions look like forts.  Missionaries were foreign conquistador invaders and their presence meant the future was grim for California Indians and North American Indians in general.

I traced that quote to Desmond Tutu’s 2004 book Desmond Tutu: A Biography in reference to European Missionaries in Africa but it is reported that Tutu borrowed the quote that had been around for many years – maybe from California Indians.  Whatever the origin, the quote fits the early European settlement of California.  California Missions existed for unequal parts of soul saving and real estate acquisition.

But I wasn’t at Mission San Juan Capistrano to look at its religious or historic past from a modern day perspective but to take photos of its architecture, adobe structures, masonry, doors, windows, and floors that fascinated me on my last visit.

The Great Stone Church, a European style structure, was laid out in the shape of a cross with six vaulted domes was the only church in Alta California (California, Arizona, Nevada, Utah, Western Colorado, and Southwestern Wyoming) made of sandstone instead of adobe.  It was designed and under construction by expert Mexican stonemason Isídro Aguilár when an earthquake in 1797 cracked the rising walls.

Repairs were made but Aguilár died six years into the project and the chapel was completed by padres who didn’t have Aguilár’s stonemason skills and their Indian workers.

The church was completed in 1806 only to be leveled in an 1812 earthquake that killed 40 Indian worshipers.  One wall remained that reveals the church’s crude masonry, probably the handiwork of Indian labor, which certainly doesn’t rival the masonry of Incan Indians.

The Great Church was never rebuilt and services were moved to Serra Chapel, named after Father Junipero Serra whose statue standing in front of a cross with a young Indian boy is in the Mission’s Sacred Garden.  Serra Chapel is California’s oldest standing structure.  It was built in 1782 and, after its interrupted use as a granary and storeroom, is still used for religious services.  The altarpiece in Serra Chapel was hand-carved from 396 individual pieces of cherrywood and overlaid in gold leaf in Barcelona and is estimated to be 400 years old (a photo of Serra Chapel is in my gallery).

The Mission is famous for the annual springtime Return of the Swallows from their winter home in Argentina which inspired hits by both The Ink Spots and Glenn Miller in 1940 of the song When the Swallows Come Back to Capistrano.

In 1910, D.W. Griffith filmed Two Brothers starring Mary Pickford at the Mission.  Mary Pickford married actor Owen Moore in the Mission Chapel.  A contemporaneous painting by Charles Percy Austin after Father John O’Sullivan performed the ceremony shows the wedding taking place in front of the ruins of The Great Church.

California’s first vineyard was at Mission San Juan Capistrano in 1779.

I walked around the Mission for about an hour before exiting through the gift shop – I didn’t buy the t-shirt or adobe brick house kit.